Williams has remained a part-time competitor through each series, and just last year expanded into the Truck Series. Teamed with Josh Reaume, Williams made his series debut last year at Gateway, where he finished 21st. He made three prior appearances this year, rebounding from a DNQ in Texas to take 31st in Pocono. He also started the race at Kansas, only to pull behind the wall as a tight condition caused him to struggle for speed. Josh Reaume himself spoke to NASCAR about allowing a driver change, but Reaume himself also struggled and was soon parked for running too slow.
Williams’ family was on hand for this most recent start at Phoenix, where this time he’d race Young’s Motorsports’ #20 entry. The truck carried sponsorship from “Visit Mesa,” a tourism website promoting vacation activities in Mesa, Arizona. Unfortunately, speed was an issue as Williams ran second-slowest of the 35 entrants in practice, then anchored the charts in qualifying with a lap of 127.687mph (28.194 seconds).
Prior to the start of the race, two trucks were sent to the rear for pre-race issues. Derek Kraus was sent to a backup truck after a practice incident damaged the left side of his #19 NAPA AutoCare Chevrolet, putting him in an all-black version of his truck that then had continued issues in inspection before timing in 23rd. The other was 26th-place Dean Thompson, whose #40 Worldwide Express Chevrolet changed engines. The lap before that, 34th-place starter Keith McGee had to catch up to the tail end of the field on the first pace lap in his #33 Murphy’s Towing and Diesel Chevrolet.
At the end of Lap 1, both Thompson and Kraus had dropped McGee to last place, and Williams slipped to 34th. By Lap 3, both McGee and Williams had started to lose touch with the rest of the pack, but Williams started to pull away from McGee the next time by. On Lap 6, Williams broke loose off Turn 2, and McGee quickly cut down the deficit. The next time by, McGee pulled to Williams’ inside off the corner, but the two made contact into Turn 3. Williams’ truck received the worse end of it, pinned against the outside wall with heavy damage to the left-front and rear. Williams climbed out and was checked and released from the infield care center. In his interview, Williams took full responsibility, saying he made a mistake. His truck was towed to the wrong garage on Lap 13, then pulled into the right one moments later.
McGee continued onward with a flat tire and the rear bumper pushed in, though the crew waited an instant too late to have him come in, forcing him to limp around another lap with sparks coming from under his truck. As McGee returned to the track, he now had a serious vibration. On Lap 22, McGee pulled behind the wall, declared out under the “Damaged Vehicle Policy.” He was checked and released from the infield care center just moments after Williams’ release, expressing his disappointment since he’d been looking forward to this race for some time. The 33rd spot then fell to newly crowned 2022 LASTCAR Truck Series Champion Spencer Boyd, whose #12 Off The Grid Chevrolet was black-flagged for running too slow and pulled into the garage on Lap 75.
Rounding out the Bottom Five were 32nd-place Rajah Caruth, whose #7 Circle Chevrolet was clipped in Turn 2 during a stack-up involving multiple other trucks, flattening the driver’s side of his truck in the fifth caution of the night. Hailie Deegan’s night ended in Turn 3 with a blown right-front tire sending her straight into the barrier. Both drivers were reportedly uninjured.
On a night that saw Zane Smith score his first career Truck Series Championship after Layne Riggs qualified outside-pole in just his third career start, Kaden Honeycutt scored a surprising 9th-place finish – his first top-ten run in just his ninth career start, and with On Point Motorsports’ #30 Race Face Digital Toyota. Honeycutt made his series debut with G2G Racing at Martinsville this past spring, and has run six of the final seven races of the season with On Point.
LASTCAR STATISTICS
*This marked the first last-place finish for the #20 in a Truck Series race since March 26th of this year, when Sheldon Creed had a drivetrain issue after one lap around the Circuit of the Americas. The number had not finished last in a Truck race at Phoenix since April 21, 1996, when Walker Evans’ #20 Dana / Perfect Circle Dodge crashed after 7 laps of the Chevy Desert Star Classic.
THE BOTTOM FIVE
35) #20-Armani Williams / 6 laps / crash
34) #33-Keith McGee / 15 laps / dvp
33) #12-Spencer Boyd / 63 laps / too slow
32) #7-Rajah Caruth / 106 laps / crash
31) #1-Hailie Deegan / 133 laps / crash
2022 LASTCAR TRUCK SERIES OWNER'S CHAMPIONSHIP - FINAL
1st) Young’s Motorsports (5)
2nd) G2G Racing (4)
3rd) Niece Motorsports, Reaume Brothers Racing (3)
4th) AM Racing, David Gilliland Racing (2)
5th) Front Row Motorsports, Halmar Friesen Racing, Jordan Anderson Racing, McAnally-Hilgemann Racing (1)
2022 LASTCAR TRUCK SERIES MANUFACTURER'S CHAMPIONSHIP - FINAL
1st) Chevrolet (13)
2nd) Toyota (6)
3rd) Ford (3)
2022 LASTCAR TRUCK SERIES DRIVER'S CHAMPIONSHIP - FINAL 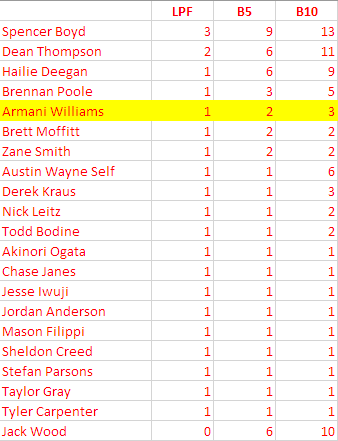