by Ben Schneider
LASTCAR.info Guest Contributor
As one of the few remaining true “start-and-parks” left in ARCA, Paul Pedroncelli was always the favorite to back up his 2021 LASTCAR ARCA Menards Series West championship. The senior driver at his family-owned Pedroncelli Motorsports team has not finished a race under power since Portland last season, running the team’s second car primarily to collect a share of the purse to help fund their primary effort driven by his son P.J.
Despite a premature end to their season to begin focusing on 2023, it looked as if Pedroncelli’s title defense would be a sure thing, having picked up four last-place finishes in the series’ first six races. With only five races remaining in the 2022 season, it was going to take an improbable run of last-place finishes in the second half of the season for another driver to make a run at the title.
For a moment, however, it looked like Andrew Tuttle might be mounting such a charge. At Portland, Tuttle lost the engine between qualifying and the race, resulting in a “did not start,” for which he was credited 13th-place. His team would suffer a similar fate at Roseville, bringing his LPF total to two. And most recently, Tuttle only completed four laps in the series’ penultimate race at the Las Vegas Motor Speedway Bullring, giving him three LPFs to Pedroncelli’s four.
With only one race left, Tuttle would hold the tiebreaker over Pedroncelli should he finish last at the finale in Phoenix, as he would have eight Bottom Five finishes to Pedroncelli’s seven. However, when the entry list was published on Monday, Tuttle’s No. 39 Last Chance Racing team was absent from the entry list. Barring a last-minute surprise post-entry, the final standings will be four to three in favor of Pedroncelli, making him the back-to-back LASTCAR Drivers’ Champion of the ARCA Menards Series West.
Tuttle and Pedroncelli’s names aren’t the only ones noticeably missing from the entry list for Phoenix. Former "Malcolm in the Middle" actor-turned-racing driver Frankie Muniz tested an ARCA car at Daytona in January and announced on FOX Sports’ All-Star Race broadcast in May that he would be running the West Series finale “for sure.” However, as of Thursday, Muniz is not entered in the race either.
Also absent from the Phoenix race is Sarah Burgess, who made history with her daughter Bridget at the Bullring as the first mother and daughter to compete against each other in a NASCAR-sanctioned event. As expected, Sarah will return to her usual role this weekend as Bridget’s crew chief as Bridget looks to make up a five-point deficit on Takuma Koga for 6th in the points standings.
Despite these absences, the entry list currently stands at a strong 31 cars with plenty of storylines throughout the field. Among the entries are 2021 and 2022 ARCA Menards Series East champion Sammy Smith, entered in his usual No. 18 Kyle Busch Motorsports Toyota. West Series veteran Bobby Hillis, Jr. returns for only his second start of the season, having finished 26th in the season-opener at Phoenix in March. David Gilliland Racing teammates Taylor Gray and Andres Perez de Lara return after their 1-2 finish at the Bullring. And 15-year-old Katie Hettinger will get another opportunity for Young’s Motorsports after crash damage with Chris Lowden ended her series debut at the Bullring prematurely.
The championship battle is locked up at the front of the field as well, as Jake Drew will officially clinch the 2022 ARCA Menards Series West title simply by taking the green flag. Drew, who holds a 56-point lead over Sunrise Ford Racing teammate Tanner Reif, was involved in a much more dramatic championship battle in last season’s Phoenix race that came down to the last lap, where Drew took the line in 10th-place as champion before then-teammate Trevor Huddleston was passed by Bill McAnally Racing’s Jesse Love, giving Love his second consecutive West Series title on a tiebreaker.
THE BOTTOM FIVE (LAS VEGAS)
26) #39-Andrew Tuttle / 4 laps / engine
25) #4-Sean Hingorani / 10 laps / handling
24) #11-Chris Lowden / 15 laps / crash
23) #02-Katie Hettinger / 15 laps / crash
22) #21-RJ Smotherman / 90 laps / oil leak
2022 LASTCAR ARCA MENARDS SERIES WEST MANUFACTURERS CHAMPIONSHIP
1st) Chevrolet (9)
2nd) Ford (1)
3rd) Toyota (0)
2022 LASTCAR ARCA MENARDS SERIES WEST OWNERS CHAMPIONSHIP
1st) Pedroncelli Racing (4)
2nd) Last Chance Racing (3)
3rd) Jones Racing (1), Brian Kamisky Racing (1), Kart Idaho Racing (1)
2022 LASTCAR ARCA MENARDS SERIES WEST DRIVERS CHAMPIONSHIP 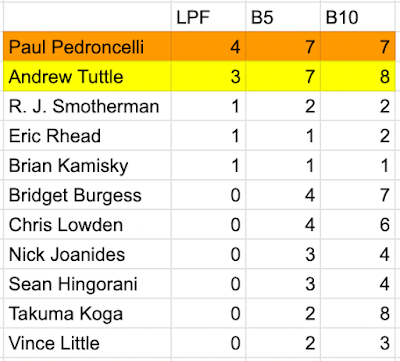