by Ben Schneider
LASTCAR.info Guest Contributor
Andrew Tuttle finished last for the 3rd time in his ARCA Menards Series West career in Saturday’s NAPA Auto Care 150 at All American Speedway when his #39 Gearhead Coffee Chevrolet failed to start the event.
The finish came in Tuttle’s fifteenth career West Series start.
For the second West Series race in a row, Tuttle’s team entered the weekend fully intending to compete in the event. His Last Chance Racing team was able to log a timed lap in qualifying - albeit nearly three full seconds off the pace of the next closest competitor. This placed Tuttle 21st of 22 cars on the starting grid, with Paul Pedroncelli bringing up the rear as he did not record a qualifying time.
Pedroncelli and his son P.J. made a welcomed return to the West Series this weekend after sitting out Evergreen and Portland. After Tuttle’s car was assisted off the track during the pace laps, Pedroncelli followed his familar “start-and-park” form, retiring from the race with brake issues after completing just three laps. Following the race, P.J. confirmed in an Instagram post that this would be the family’s final race of the season before returning in 2023.
While Pedroncelli appeared to have one hand on the 2022 LASTCAR ARCA Menards Series West championship a long time ago, Tuttle’s recent DNS results have kept him from clinching a successful defense of his title. With Pedroncelli expected to be absent from the final two races in Las Vegas and Phoenix, Tuttle can still mathematically clinch the LASTCAR West Series title should he finish in last place in both races. However, the chances of this are slim. Unlike Pedroncelli’s #31 entry, which is used almost exclusively as a start-and-park, Tuttle was on a stretch of five consecutive races where he finished under power before these two DNS results. Should Tuttle and his team be able to bounce back and take the green flag in the final two races, his form from earlier this season suggests Pedroncelli is still the title favorite despite his projected absence for the rest of the season.
After Tuttle and Pedroncelli, the next two retirements were Chris Lowden and Bridget Burgess, who fell out with crash damage after 11 and 12 laps respectively. As a spin from Burgess did not immediately bring out a caution, Lowden collided head on with Burgess’ car, resulting in significant damage to both vehicles. The final spot in the Bottom Five was taken by Takuma Koga, who suffered crash damage of his own in an incident with Vince Little after completing 120 laps.
At the front of the field, Bill McAnally Racing’s Cole Moore led 70 of 150 laps to score his long-awaited first career West Series victory. Moore competed part-time for BMR from 2015-17 and returned to the team last season in a full-time effort, finishing third in the championship standings. Moore’s win is also the first in 2022 for BMR as a team and BMR’s first win with Chevrolet since 2007.
THE BOTTOM FIVE
22) #39-Andrew Tuttle / 0 laps / did not start
21) #31-Paul Pedroncelli / 3 laps / brakes
20) #11-Chris Lowden / 11 laps / crash
19) #88-Bridget Burgess / 12 laps / crash
18) #7-Takuma Koga / 120 laps / crash
2022 LASTCAR ARCA MENARDS SERIES WEST MANUFACTURERS CHAMPIONSHIP
1st) Chevrolet (8)
2nd) Ford (1)
3rd) Toyota (0)
2022 LASTCAR ARCA MENARDS SERIES WEST OWNERS CHAMPIONSHIP
1st) Pedroncelli Racing (4)
2nd) Last Chance Racing (2)
3rd) Jones Racing (1), Brian Kamisky Racing (1), Kart Idaho Racing (1)
2022 LASTCAR ARCA MENARDS SERIES WEST DRIVERS CHAMPIONSHIP 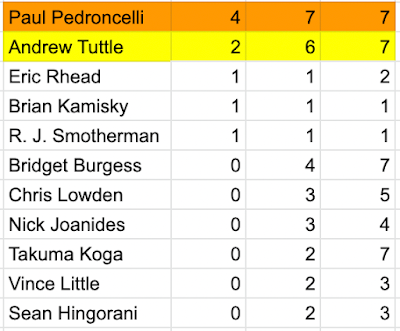