Conor Daly finished last for the 5th time in his NTT IndyCar Series career in Sunday’s Grand Prix of Portland at Portland International Raceway when his #20 Bitnile Chevrolet succumbed to a clutch fire after completing 67 of the race’s 110 laps.

The finish came in Daly’s 96th career start and was his first since last year’s May Grand Prix at Indianapolis, 27 races ago.

The owner of one of IndyCar’s more outsized personalities, Conor Daly has a wide-ranging racing career that saw him run up the karting ranks before finding success in the early-era Road to Indy, parlaying that into a climb into the European formula ranks. After a reserve deal with Force India expired, Daly came back to IndyCar, where he made a splash with Dale Coyne Racing in his rookie year. His podium at Belle Isle with the team in 2016 was a precursor of things to happen with later Coyne rookies Romain Grosjean and David Malukas. After one season at A.J. Foyt Racing in 2017, Daly has since bounced between part-time rides with several teams, including Carlin, Andretti Autosport, and the then-named Schmidt Peterson Motorsports. For a few years, Daly’s main backer was the U.S. Air Force, which then declined to sponsor any IndyCar entries this year. However, following the departure of Ed Jones from Ed Carpenter Racing, Daly took over road course entries for the team’s #20 car in 2020, holding that same role in 2021 before expanding back to full-time in 2022.

Daly finished 20th and 19th, respectively, in Portland's first and second practices. In a rare occurrence, Takuma Sato was the slowest car in first practice, driving for the same Coyne team that has lately received accolades for the performance of Malukas. Sato only finished 23rd of 25 entrants in second practice, and qualified 22nd, behind Daly’s 20th-place effort.

Starting last on Sunday was Dalton Kellett, the lone starter in Row 13. However, he quickly passed Johnson in the relative calm of the first lap, and Johnson was a little over ten seconds in arrears at the conclusion of that ciruit. The gap doubled by the end of Lap 5, and was almost 24 seconds at the end of Lap 7.

This was when Simon Pagenaud made a very early pit stop to kick off the first round of green-flag stops. He exited the pit lane 51 seconds back of leader Scott McLaughlin and held steady until Romain Grosjean pitted on Lap 12, starting the sequence in earnest. Johnson pitted two laps later and cycled back to last, a lap down at this point.

Kellett pitted on Lap 21, and cycled to last place with the overcut strategy, losing time to Johnson’s fresh rubber. Kellett held that position about five seconds back of Johnson once the tires evened out, although he started gradually making up the difference as the lap counter passed Lap 35.

What could’ve turned into a barnburner last-place battle was stymied by the beginning of the second round of green-flag pit stops for the cars that were not in contention. Once again, it was the car of Simon Pagenaud that started the cycle, coming in on Lap 40. In a similar fashion, last place went from him to Grosjean to Johnson and back to Kellett in about ten laps, with Kellett and Johnson emerging from their service a lap down. Daly pitted on Lap 47, with some fuel igniting as it splashed out of the hose. However, the fuel fire quickly extinguished itself and the car was back on its way, settling into 20th position for the green-flag run.

On Lap 57, Pagenaud made yet another pit stop, this time an unscheduled one for gearbox repairs. The team immediately brought the car back to the hauler, but was able to diagnose and fix the problem quickly, sending the #60 car out after just ten laps. On the same lap that Pagenaud returned, Daly made another pit stop. He tried to get the car in gear at the conclusion of the stop, but the clutch was damaged by the fuel fire from the previous stop and the car could not catch a gear, forcing its retirement.

Up to and including that point, the race remained caution-free, a very rare occurrence for the Portland racetrack. All three of IndyCar’s previous stops at the track saw a last-place finisher retire as a result of first-lap contact, and the 2004 Champ Car race at the track also saw an early accident.

Johnson was 24th, the victim of contact with Rinus VeeKay when VeeKay cleared himself into turn one lapping Johnson. Pagenaud rounded out the Bottom Three, too far back with the gearbox problems from midrace to advance.

Heading into next week’s season finale at Laguna Seca, Chevrolet has clinched the season’s manufacturer championship, with a three-point advantage on Honda. The owners championship is a toss-up in between A.J. Foyt Racing and Ed Carpenter Racing, each currently tied at three apiece. 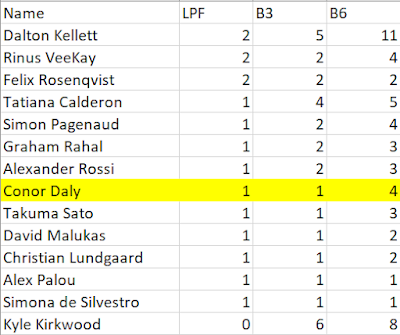