Callum Ilott scored the 1st last-place finish of his NTT IndyCar Series career in Sunday’s Firestone Grand Prix of Monterey when his #77 Juncos Hollinger Racing Chevrolet retired with mechanical issues after completing 37 of the race’s 95 circuits.

Callum Ilott may have come into the season finale sitting just third in the IndyCar Rookie of the Year standings, but he has garnered his share of attention in a crowded freshman field. It wasn’t supposed to be that way, as the ex-Formula 2 driver and former Alfa Romeo reserve was perhaps the least-heralded prospect coming into the season. Longtime Road to Indy and sometimes IndyCar team owner Ricardo Juncos partnered with businessman Brad Hollinger to put a car on the grid for the last three races in 2021, for which they tapped Ilott. With opportunities in Europe running out, Ilott came across the pond for the full 2022 season with the fledgling team, which was rumored to have a partnership with Carlin for the season until Carlin eventually sold most of its operations to Juncos team before the season started.

The early part of the season went about as one would expect, with Bottom Three finishes in three of the season’s first five races. Ilott crashed in the Indianapolis 500 and had to miss the final Belle Isle race, where Santino Ferrucci delivered a 21st-place run in his place. But after his return, Ilott made Round 2 of qualifying in the next three races and placed solidly in the midfield at both Iowa contests. More recently, he grabbed his second career IndyCar top-ten finish in the last race at Portland, buoyed by the announcement that he would return for another year in the #77 Chevrolet and that he would have a yet-to-be-named teammate in 2023.

Ilott raised many eyebrows when he put his Chevrolet in the fifth position for first practice at Laguna Seca, though the track was one on which he did compete during his limited 2021 slate. The race’s lone part-time entrant, Simona de Silvestro, was last in opening practice, trailing Jimmie Johnson by a tenth of a second. Ilott was ninth in second practice, showing a consistent pace that was surprising for IndyCar’s lone single-car team.

Ilott was fifth in Group 2 of qualifying, and then was the last car to qualify for the Fast Six, edging David Malukas by eight-thousandths of a second. A great lap during the final round of qualifying placed him second on the grid, only two-hundredths seconds behind polesitter - and eventual series champion - Will Power.

Starting last on Sunday was de Silvestro, who was the slowest in Group 2. She was late pulling up alongside Josef Newgarden in Row 13 for the start, but made it there eventually for a side-by-side start.

On Lap 1, Ilott was swallowed up in a horde of drivers with a case to make, be they championship ambitions or otherwise. He dropped to fourth but stayed there for most of the opening stint before passing Alexander Rossi for third position near the end of the first stint. Last place flipped from de Silvestro, who was 11.3 seconds in arrears after the first lap, to Johnson, who was 14.7 seconds back after two, then back to de Silvestro, and after to Dalton Kellett. Kellett was spun by Jimmie Johnson in the middle of Lap 5, and a couple of laps later, Johnson was assessed a tail-end penalty by race control for avoidable contact, dropping him to last. After the penalty was assessed, Johnson was running 41 seconds back of leader Will Power.

Green-flag pit stops brought a shakeup to the last-place battle. Once again, Meyer Shank Racing led the undercut cars, bringing Helio Castroneves in for a stop on Lap 9. Several drivers came in on the following lap, but Colton Herta’s crew had issues with a wheelnut, leaving the driver on pit road for around an extra eight seconds and dropping him to last. Herta eventually worked his way up to a top-ten running position, but Kellett lost it in the final turn just two laps later, taking a long trip through the sand runoff and dropping himself to a 1 minute, 8 second gap before his first pit stop. The stop came four laps later on Lap 16 and dropped the A.J. Foyt Racing driver to lap-down status. He maintained last for most of the second stint, the only car a lap down and about 35 seconds behind Johnson, who was running 25th.

On Lap 28, the last-place battle was almost settled. Marcus Ericsson shoved Simon Pagenaud into the grass off of a right-hand turn, sending the #60 car careening towards a tire barrier. Pagenaud was able to get the car pointed straight and drove parallel to the barrier until the next corner and continue on, averting near disaster.

Cars continued to pit throughout the race, depending on if they were on a three-stop or four-stop strategy. Ilott made a stop on Lap 37, but exited the pit lane slowly - so slowly, that the car eventually faltered and came to a stop just outside the exit of pit lane. In typical fashion, IndyCar stranded the #77 machine on the track for a couple laps so everybody could pit under green and then called the caution, towing the car off the track.

Ilott was the only driver that failed to finish the race. Kellett finished 25th, two laps down by the end of the race. Conor Daly rounded out the Bottom Three in 24th, also two laps down in a race that saw him make five pit stops during the course of the event.

As Ilott’s finish was the first of his career, Dalton Kellett clinched the 2022 LASTCAR IndyCar Series drivers’ championship. Both he and Rinus VeeKay had two last-place finishes on the year, but Kellett clinched by virtue of his six Bottom Three finishes as compared to VeeKay’s two. Kellett’s two last-place finishes both came within the first five races of the season, holding the championship lead ever since the third race of the season. The title is the first of Kellett’s career. 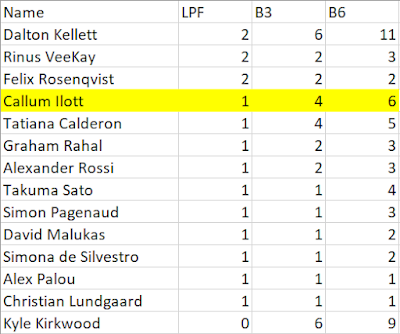