by Ben Schneider
LASTCAR.info Guest Contributor
AUTHOR’S NOTE: A huge thank you to my GRID Network colleague Joe Samaniego for his on-site coverage at Portland this weekend, and for providing interviews with several of the drivers featured in this article.
Andrew Tuttle finished last for the 2nd time in his ARCA Menards Series West career in Saturday’s Portland 100 at the Portland International Raceway when his #39 Gearhead Coffee Chevrolet failed to start the event.
The finish came in Tuttle’s fourteenth career West Series start.
A veteran of the former NASCAR K&N Pro Series West, Tuttle has raced in the series sporadically since 2013, the year he made his debut at Brainerd International Raceway and finished 15th. He’d again make a handful of starts in 2017 and 2018 before returning to the series last season at All American Speedway. This season, Tuttle has competed in the West Series full-time - but for a withdrawal from the second race of the year at Irwindale - enjoying a career-best finish of 12th when ARCA West most recently visited Portland this past June.
Unfortunately for Tuttle, his return to the track ended prematurely when his car lost an engine following qualifying. “The car was great,” Tuttle told GRID Network’s Joe Samaniego. “We had some internal parts that decided to go external, blew a hole through the oil pan, and lost the motor.” He was especially disappointed as he believed he had an opportunity for a strong race, adding, “I believe we could have been a top-ten car today. That was our goal coming out today, and I believe we had the car for it in the beginning.”
Due to Tuttle’s absence, only twelve cars took the green flag. Sean Hingorani was the first to run into trouble when he went off course coming to complete Lap 6, which resulted in the first caution of the day. Hingorani commented, “We were running up front, I was trying to get the car down in 2nd gear. It didn’t go, and we were in neutral. The car kind of rolled of the track.” While Hingorani only suffered minor damage, his race was further compromised when his transmission failed. “Everything was fine,” Hingorani added. “We barely tapped the wall…we were just riding around the back waiting for a caution, but [the] transmission blew up on us. About halfway through the race, we got a new transmission in, and we were able to finish out the race [and] get some more laps, but [it’s] just a disappointing weekend out here.” Hingorani was able to finish the race under power, completing 32 of the 57 total laps.
Next up the running order was Vince Little, whose race took a turn for the worse on Lap 39 when he spun out and stalled on course. Little completed a total 48 laps, two fewer than tenth-place finisher Bridget Burgess. Burgess appeared to be headed for a career day, running solidly in fourth place before the caution for Little. “We’ve been struggling all weekend with fuel pressure,” Burgess said. “Basically every straightaway, my fuel pressure would drop, and it wouldn’t allow me to go full throttle.” Burgess’ team took advantage of the caution to top off her fuel and avoid any fuel pressure concerns; however, exiting the pits on her out lap, her car lost transmission fluid and began smoking before coming to a halt. Burgess spent several laps behind the wall before returning to the track and picking up her fourth Top Ten in the last five races: “It’s unfortunate to go from last place all the way up to fourth place and then back down to just finishing tenth, but it’s still another top ten finish, and we’ll take that.”
Bill McAnally Racing’s Landen Lewis rounded out the Bottom Five, as Lewis had to pit for repairs on Lap 35 following minor front end damage. Like everyone who took the green flag, Lewis also took the checkered flag under power, finishing three laps down in ninth place.
Up front, Sunrise Ford Racing’s Jake Drew completed the Portland sweep, taking his fourth victory in the last five races, a stretch that began at the series’ first trip to Portland earlier this season. Drew, who has yet to finish outside of the Top Five this season, currently has a 52-point lead over his teammate Tanner Reif, all but ensuring him the championship with just three races remaining.
THE BOTTOM FIVE
13) #39-Andrew Tuttle / 0 laps / did not start
12) #04-Sean Hingorani / 32 laps / running
11) #85-Vince Little / 48 laps / running
10) #88-Bridget Burgess / 50 laps / running
9) #16-Landen Lewis / 54 laps / running
2022 LASTCAR ARCA MENARDS SERIES WEST MANUFACTURERS CHAMPIONSHIP
1st) Chevrolet (7)
2nd) Ford (1)
2022 LASTCAR ARCA MENARDS SERIES WEST OWNERS CHAMPIONSHIP
1st) Pedroncelli Racing (4)
2nd) Jones Racing, Brian Kamisky Racing, Kart Idaho Racing, Last Chance Racing (1)
2022 LASTCAR ARCA MENARDS SERIES WEST DRIVERS CHAMPIONSHIP 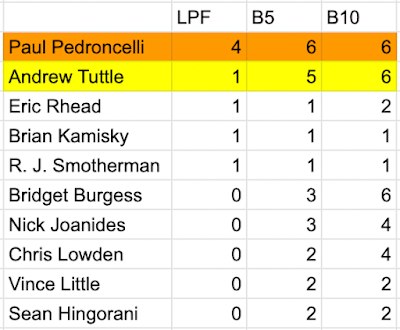