Simona de Silvestro finished last for the 5th time in her NTT IndyCar Series career in Sunday’s Big Machine Music City Grand Prix on the streets of Nashville when her #16 Acumatica Chevrolet was involved in an accident after completing 25 of the race’s 80 laps.

The finish came in de Silvestro’s 72nd career start and was her first since Milwaukee in 2013, 155 races ago.

Longtime IndyCar fans are well-acquainted with the name Simona de Silvestro. The Swiss driver came to America for junior single-seater experience, testing at the end of the 2009 season for HVM Racing as a precursor to three years with the program, including a year in 2012 when the team was powered by Lotus engines. Her most memorable IndyCar exploits came in 2013 with KV Racing Technology, scoring a podium in Houston as part of a string of five consecutive top-ten runs to finish out the season. She earned the call to be an affiliate driver for Sauber F1 in 2014 before spending time in Formula E, Australian Supercars and ADAC GT Masters between 2015 and 2021.

Last year, IndyCar Series owner Roger Penske wanted more female representation in the garage, and Beth Paretta was the one to step up and start a team in alliance with Team Penske. Initially, Paretta Autosport signed de Silvestro for only the 2021 Indianapolis 500, where they were in the thick of the action on Bump Day, outqualifying two entries to make the field. After a late-race accident ended their day, the team remained dormant until April of this year, when it announced plans for a three-race road course schedule. Those races would happen with de Silvestro behind the wheel and a new alliance with Ed Carpenter Racing. The ECR support was visible at the team’s 2022 debut at Road America, as the team operated out of a third ECR hauler and used a number of ECR-branded implements in the paddock. The team ran a solid 21st at that race and improved to 18th at Mid-Ohio, bringing hope for this weekend at Nashville.

That optimism was furthered by an announcement a week ago that Acumatica had joined the team as the primary sponsor for Nashville, and another announcement early in the weekend that Paretta and de Silvestro would enter a fourth race this season, the finale at Laguna Seca. However, that high note was fleeting, as the #16 machine was 25th in opening practice, scoring ahead of only the Dalton Kellett entry. The team did pick up the pace a little bit in second practice, jumping the Jimmie Johnson car to rise to 24th. The rough weekend continued in qualifying, when de Silvestro was one of three drivers that got caught waiting during Group 1 when a couple of incidents hampered the session, leaving her, Colton Herta and Devlin DeFrancesco without a recorded time.

Ultimately, de Silvestro was slotted as the furthest up of the drivers with no time, yielding a starting position of 21st. The 26th and final starter was Johnson, who ran about a second slower than Helio Castroneves in Group 2 to land in the final spot. However, Castroneves was assessed a six-position grid penalty before the start of the race, dropping the Brazilian to the final position on the grid. The running order was shuffled early by an incident between Herta and Kellett. Kellett was one of the beneficiaries of the Group 1 mayhem, using an early lap on alternate tires to advance to the Fast 12. However, the A.J. Foyt Racing driver’s race speed was not at that pace, and Kellett drifted up the track coming out of Turn 4, a tight left-hander, on Lap 3. The contact pushed Herta into the tire barriers, and he pitted for repairs.

Herta remained the last-place runner until teammate Alexander Rossi stalled his car on Lap 8 and drew a caution, leaving both Andretti teammates a lap down. Rossi remained in last for the next green flag run, with de Silvestro fading to 23rd before making her way up the running order as green flag pit stops took their course. Even after Castroneves spun on Lap 22, the Andretti teammates remained in the bottom two spots in the running order.

On the ensuing restart, a checkup in the fifth to seventh position range sent Graham Rahal into the back of the Pato O’Ward car, simultaneously causing terminal damage to O’Ward’s gearbox and dislodging Rahal’s front wing. With both cars disabled into a tight left-hand turn, several cars further back in the field, including Jack Harvey and Callum Ilott, also hit the binders hard. This caused an accordion effect in which several cars, including de Silvestro, Kellett, and Scott Dixon all piled into each other and caused a track blockage.

Of the several cars involved, O’Ward, Kellett, and de Silvestro all suffered immediate retirements. As such, the finishing order was classified by the last completed lap, with de Silvestro taking the final spot by virtue of her 23nd-place running position on the previous lap, compared to 21st and 9th for Kellett and O’Ward, respectively. 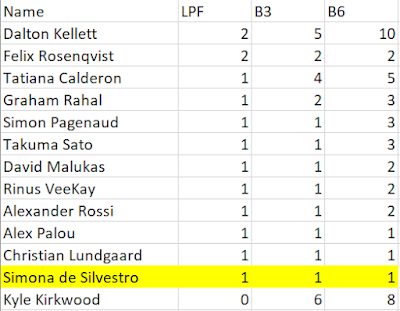