Simon Pagenaud finished last for the 4th time in his NTT IndyCar Series career in Saturday’s Gallagher Grand Prix at Indianapolis Motor Speedway when his #60 AutoNation / SiriusXM Honda ran off course after completing 34 of the race’s 85 laps.

The finish came in Pagenaud’s 181st career start and was his first since Long Beach in 2018, 73 races ago.

Pagenaud, a longtime Team Penske pilot in IndyCar, found himself the odd man out at the conclusion of the 2021 season when the team downsized from four entries to three. However, the veteran was quickly tapped by Meyer Shank Racing to fill their second seat after the departure of Jack Harvey to Rahal Letterman Lanigan Racing over the offseason. His tenure with MSR started out on the right foot, serving as the fourth driver in the team’s 24 Hours of Daytona entry and wound up winning the race along with co-drivers Helio Castroneves, Oliver Jarvis and Tom Blomqvist. However, Pagenaud’s IndyCar season has been considerably less successful. Save for a second-place finish at the AMR Grand Prix at Indianapolis in April, he has finished no better than seventh all season. Despite that, the French driver held a top-ten position in the series point standings as recently as halfway through the Iowa weekend, before radio issues hampered his second race, leaving him 23rd at the finish.

The lone practice session of the weekend saw Pagenaud clock in 16th on the speed charts, several spots behind teammate Castroneves, who was 9th. Dalton Kellett, who finished last at the Indy Grand Prix in May, was last of the 25 cars, the only driver running a fast lap in the 1 minute, 12 second range. Kellett's was also the slowest car to take a lap in qualifying, but he did not start last. That would be Marcus Ericsson, who was told to shut down his car by his engineer before completing a lap in qualifying. This sent the leader of the championship to the back of the grid for the start of the race.

At the line to start, Ericsson was just over two seconds back of polesitter Felix Rosenqvist, all alone in Row 13 trailing Kellett and Jimmie Johnson. The Ganassi driver moved up to 23rd during the first few corners, and Kellett held steady in 24th, dropping Johnson to last, 10.5 seconds behind the leader. However, Will Power made contact with Pato O’Ward during the opening lap and spun O’Ward. O’Ward completed a full 360 degrees and got it righted, only to stall in the process, dropping him to last. Kellett spun on Lap 3, drawing the first caution of the race and dropping to the back of the running order. The two drivers involved on Lap 1 and Takuma Sato all made pit stops on Lap 4, and O’Ward was last for two circuits after the caution until he passed Kellett, who was 13 seconds off the point at the time.

Pagenaud entered the last-place picture on Lap 9 when he pitted from fourteenth position, kicking off the green-flag pit cycle. Callum Ilott, Conor Daly and Romain Grosjean all spent time in last before it cycled back around to Kellett, who was briefly a lap down immediately following his stop but got it back. He remained the last-running car until Pagenaud slowed and pulled off the track on Lap 35, the victim of a mechanical problem that drained the car of its fuel. After stalling on track, the team elected to retire the car.

However, there was a silver lining for Pagenaud, as he set the fastest lap of the race on Lap 12 while running 19th. Also with a positive storyline was last week’s last-place finisher Christian Lundgaard, who qualified sixth and ran well all day, ultimately coming home as runner-up to race winner Alexander Rossi.

Colton Herta finished 24th, retiring after a wonky run over a curb caused a significant loss of speed in the car. Kyle Kirkwood rounded out the Bottom Three as the last car running, one lap down. 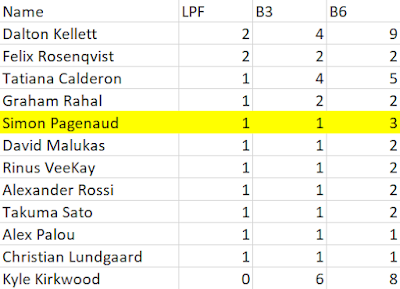