Rinus VeeKay finished last for the 2nd time in his NTT IndyCar Series career in Saturday’s Bommarito Auto Group 500 at World Wide Technology Raceway at Gateway when his #21 Bitoin Racing Team with Bitnile Chevrolet fell out of the race with mechanical issues after completing 53 of the race’s 260 laps.

The finish came in VeeKay’s 44th career start and was his first since the Indianapolis 500 earlier this year, nine races ago.

Since his crash at Indianapolis, VeeKay has had quite the eventful summer. For a few fleeting weeks, he was considered the hottest free agent on the IndyCar market - that is, before silly season became the craziest in recent memory. VeeKay locked in a multi-year extension with Ed Carpenter Racing, a well-deserved one in the middle of a season that has VeeKay outperforming other team entries on a regular basis. Those efforts included fourth-place runs at Mid-Ohio and Iowa and a handful of laps led on the streets of Toronto.

After campaigning for more ovals on the schedule during the early portion of the weekend, Jimmie Johnson anchored the charts in practice, about a tenth of a second off the pace of Dalton Kellett. Felix Rosenqvist was the last car on the starting grid. His #7 Arrow McLaren SP spun during qualifying and since there is single-shot qualifying on ovals, he did not list a time. In fact, IndyCar’s qualifying report went so far as to denote that Rosenqvist failed to qualify for the race, although that was not, in fact, true.

Starting alongside Rosenqvist in the final row was Ed Carpenter, making his final oval start of the year. Carpenter struggled throughout 2022, only mustering a 19th-place finish in the Indianapolis 500 and showing a noticeable lack of speed at all other ovals on the schedule. However, the duo both passed Jimmie Johnson on lap one, who fell five seconds back of the leaders at the end of the first lap. He gradually fell back and was lapped during the opening green-flag run on Lap 39. Jack Harvey cycled to last as green-flag pit stops began on Lap 47, and VeeKay went to last on Lap 51. Carpenter briefly took last on Lap 52 as VeeKay went back out on track, but he was in the pits one lap later with electronic issues.

VeeKay later said that his entire dashboard froze, forcing him to shift gears on feel and not on what the dash said. He brought the machine into pit road to do a power cycle, which would reset the car, but the car wouldn’t shift into neutral, eliminating one option at a fix. The car was taken to the garage, where it was retired.

The Dutch driver was the only one that failed to finish the race. Alexander Rossi was 25th, his race derailed after running out of fuel under green. Harvey rounded out the Bottom Three after contact with the outside wall during the mid-portion of the race led to an extended repair period on pit lane. 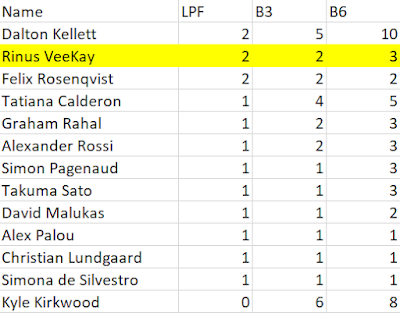