by Ben Schneider
LASTCAR.info Guest Contributor
R.J. Smotherman finished last for the 1st time in his ARCA Menards Series West career in Saturday’s Evergreen 150 at Evergreen Speedway when his #21 Blue Valor Whisky / Stoney’s Roadhouse Ford retired with handling issues after 16 of 150 laps.
The finish came in Smotherman’s West Series debut.
Smotherman grew up racing in Las Vegas, winning a championship in the Bandolero Class by the time he was eleven years old. He also raced junior late models in Madera, California, competing in the Junior Late Model Series, a series for ten to sixteen-year-olds funded by Madera Speedway owner Kenny Shepherd and NASCAR Cup Series champion Kyle Busch. Now seventeen, Smotherman made his debut in the West Series on Saturday in the Kart Idaho Racing #21 entry, which had only made one other start earlier this season at Irwindale Speedway when Stafford Smith drove it to a fourteenth-place finish.
This past weekend at Evergreen marked the milestone 1,000th race in the history of the West Series, which can trace its history back to 1954 when it was known as the Pacific Coast Late Model Circuit. After several rebrands for sponsorship reasons, the West Series became known as the ARCA Menards Series West following NASCAR’s acquisition of ARCA in 2018. What had most recently become the K&N Pro Series West was rebranded under the ARCA Menards Series banner beginning with the 2020 season.
Entering the weekend, two cars were noticeably absent from the entry list. Defending LASTCAR ARCA Menards Series West champion and weekly last-place favorite Paul Pedroncelli elected not to make the trip to Evergreen, while his son P.J. skipped the event as well. With only four races remaining in the season, Paul Sr.’s four last-place finishes will almost certainly still be enough to defend his title due to his six Bottom Five finishes, coupled with the fact that this season’s other last-place finishers are all on part-time schedules themselves. In place of the Pedroncellis were the debuts of Smotherman and Sean Hingorani, who qualified seventh in Eric Nascimento’s #4 car. Canadian David Smith was the third newcomer to the series, bringing up the field in the fifteenth and final starting spot.
At the start of the race, West Series regular Bridget Burgess tagged the wall coming off of turn 4 to complete Lap 1, bringing the caution out as she suffered a flat tire. Burgess dropped to last place as she had to pit for repairs, but as the field was slowed under caution, she only lost one lap to the leaders. Burgess had regained a handful of positions by the time Smotherman pulled behind the wall as the first retirement with 16 laps completed. (An Instagram post from Smotherman later confirmed the entry was intended as a “start-and-park.”) Hingorani and Smith were the next retirements, falling out with crash damage after 71 and 117 laps respectively. Rounding out the Bottom Five were Chris Lowden and Andrew Tuttle, both of whom brought out cautions for single-car incidents during the race but managed to keep their cars running at the finish.
Up front, Sunrise Ford Racing continued their winning streak, although Tanner Reif was the one who went to Victory Lane this time, breaking Jake Drew’s stretch of three consecutive series victories. The win moves Reif up to second in the championship point standings, albeit 44 back of Drew’s total of 361.
THE BOTTOM FIVE
15) #21-R.J. Smotherman / 16 laps / handling
14) #4-Sean Hingorani / 71 laps / crash
13) #05-David Smith / 117 laps / crash
12) #11-Chris Lowden / 128 laps / running
11) #39-Andrew Tuttle / 141 laps / running
2022 LASTCAR ARCA MENARDS SERIES WEST MANUFACTURERS CHAMPIONSHIP
1st) Chevrolet (6)
2nd) Ford (1)
2022 LASTCAR ARCA MENARDS SERIES WEST OWNERS CHAMPIONSHIP
1st) Pedroncelli Racing (4)
2nd) Jones Racing, Brian Kamisky Racing, Kart Idaho Racing (1)
2022 LASTCAR ARCA MENARDS SERIES WEST DRIVERS CHAMPIONSHIP 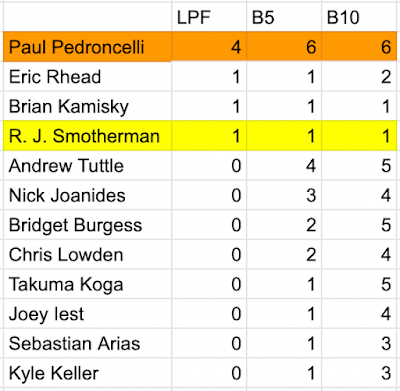