Alex Clubb scored the 4th last-place finish of his ARCA Menards Series career in Sunday’s Sprecher 150 at the Milwaukee Mile when his #03 Clubb Racing Ford crashed after completing 2 of the race’s 150 laps.

The finish came in his 27th series start and was his first since Pocono, five races ago.

Since his previous last-place finish, Clubb and his team have endured the highs and lows that come with a full-season effort. A well-handling car at IRP was sidelined with overheating issues. Road course ringer Casey Carden took the wheel at Watkins Glen and brought home a 15th-place finish. Clubb himself finished 11th at the Springfield Mile, the team’s best result of the year. Milwaukee brought what is pretty much the closest thing to a home race for the team, just over two hours away from Morris, Illinois.

As Milwaukee counted for points on both the ARCA and ARCA East schedules, a stout field of 28 cars arrived at the track. Among them was Tim Richmond, driving the #06 in a car prepped by his family team but run with Wayne Peterson Racing’s number. Another was Nate Moeller, running a full Wayne Peterson Racing entry. Moeller made his ARCA East debut at Five Flags earlier this year, and said before the race that he has dirt racing experience as part of the University of Northwestern Ohio motorsports program. “This track is not banked at all like Five Flags, so it’s a completely different track. Getting used to the flatter corners is an adjustment for me, although I think that if I had a couple more hours to figure out the track, we could be a lot faster,” he said in regards to his thoughts about his second asphalt race weekend. Moeller stated that his main goal was to stay out of the way of the leaders and run “what feels right.”

Fast Track Racing, as always, had a load of stories behind its entries. Tim Monroe, driving a "start-and-park" entry in the #10, had the shortest backstory of the week. Bryce Haugeberg, still in tip-top shape after the harrowing crash at Springfield a week ago, took over the helm of the 11. The car carried none of the sponsors that typically back Haugeberg’s efforts, but when asked prerace about his plans, the North Dakota driver said that it would be a full-race effort. Multiple Fast Track crew members indicated that the car involved in the Springfield accident will never see a racetrack again.
Zachary Tinkle also climbed aboard an unsponsored car, the #12 machine. Tinkle and Wayne Peterson Racing parted ways following the Springfield race, and Tinkle said that Milwaukee may very well be his last full race of 2022 while his focus turns to finding the right 2023 opportunity. Rounding out the usual four-car team was Stephanie Moyer, who despite running the chassis she owns was only due for a "start-and-park" entry, according to her crew chief. Some of the team’s resources, however, were going towards the #44 entry of Mike Goudie. Goudie’s McClure Racing entry was prepared and crewed jointly with Fast Track, as the McClure team does not have enough employees to be a full unit at the track.
Smith also made headlines for making his 400th ARCA start at Milwaukee. The series presented him with a signed checkered flag complete with signatures of fellow drivers as well as ARCA staff members. In the media center to receive his present, Smith told those assembled that the car he made his first ARCA start with at Rockford, Illinois in 1988 was the same chassis that won the 1974 Daytona 500 with Buddy Arrington as the driver. The tale was a quintessential ARCA moment, a crazy thread of chassis history and a tributary mention of a recently-departed legend.
Practice was cut short by about 15 minutes due to rain moving in. Clubb was 25th with a best lap of 34.077 seconds, and Moeller was last with a single lap of 48.6 seconds. The main story coming out of practice was Amber Slagle, whose car returned to the pit lane with significant damage to the front right side of the car. The Cook Racing Technologies team wound up replacing part of the right-side body, causing the entry to miss qualifying. However, since less than 36 cars were entered, all cars would take the starting grid. Slagle’s car passed inspection and was pushed to the starting grid with plenty of time before the start of the race.

Moeller went to the back of the field at the start - possibly a consequence of missing driver introductions or perhaps by choice. Leland Honeyman went to the back as well, his Young’s Motorsports car the subject of post-qualifying adjustments. Eric Caudell joined those two, dropping back from his 23rd qualifying spot.

At the end of the first lap, Moeller was a ways behind the 27th-place running car of Thomason. Coming off Turn 4, the Great Railing machine pulled off the track and stopped in the Tim Richmond pit stall. A Wayne Peterson Racing mechanic came over to check on the car, but never actually touched it. A short time after the yellow came out on Lap 3, Moeller re-fired the car and went back out on track.

The caution was for Clubb, who said before the race that he expected to be about a 20th-place car in the race, and backed that up by qualifying 21st. But going into turn one on Lap 3, Clubb said that the car “just went straight,” and said that it was definitely something mechanical, not tire-related. When asked about the future of the car, he was pessimistic, telling me that there was little to no chance of that chassis running again. “The plan was to have me running all of the races for the rest of the year, but after this, I’m not sure,” Clubb said.

Moeller wound up pulling in after 9 circuits were completed, near the end of the initial caution period. Tim Monroe was first of the Fast Track cars out, followed by Stephanie Moyer. Moyer’s crew chief, Dallas Freuh, said before the race that he expected Moyer to run 25 to 30 laps before pulling in, and her lap count in the end was 32. Around the time Moyer came in, Thomason made a stop on pit road and then made another one in short order, only to be pushed back to the garage area. A crew member for the Tim Goulet Enterprises team told me that the legacy engine in the car didn’t help the team’s pace, and that Thomason struggled in traffic. He noted that this was Thomason’s second-ever oval race, and that the first one at Berlin was abbreviated due to an accident.

As for Brad Smith, he said after the race that it “didn’t go the way we wanted it to,” but the #48 car finished the race, 14 laps down in 21st. It was certainly a race befitting of a driver who has admirably fought any and all adversity for decades.
THE ILLUSTRATED BOTTOM FIVE 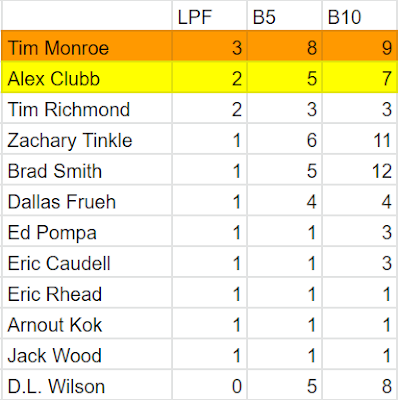