ARCA: Tim Monroe first of a slew of retirees at Indianapolis Raceway Park

The finish came in Monroe’s 10th career series start and was his first since Talladega earlier this year, eight races ago.

Since his issues at Talladega, Monroe has run two more ARCA races - one for Fast Track and one for Ryan Huff’s team. He has also continued to work on his A-modified race car, completing the finishing touches on the car recently in preparation for a potential next race at Winchester (VA) Speedway on August 13.

The stout entry list for the IRP race included four series debuts, all from markedly different scenarios. The most well-known of these was Dylan “Mamba” Smith, the occasional racecar driver and garage personality who was entered in an A.J. Allmendinger tribute paint scheme for Young’s Motorsports. Former Truck Series team owner Steve Chick Jr. purchased a car from Visconti Motorsports and fielded it for his daughter, 20-year-old Mandy Chick, a late model racer from Kansas. Mark Noble, another team owner new to the ARCA scene this year, fielded his first entry in the ARCA national series after entering two East races earlier this season. Noble's driver was Southern late model hot shoe Dylan Fetcho, whose recent experience includes runs at South Alabama Speedway and the Nashville Fairgrounds. The final series debut came out of the Fast Track Racing stable, where a limited late model driver from Virginia, Chris Martin Jr., would take the helm of the team’s flagship #10 car.

Monroe was the slowest in practice by a long shot, as all other drivers ran laps in the 22 to 26-second range. The driver of the #01 ran a singular lap of 36 seconds in order to fulfill the session. However, during qualifying, Monroe slotted right in with the rest of the field, outqualifying Brad Smith and qualifying right behind Martin Jr.

Zachary Tinkle, driving his home race for Wayne Peterson Racing, experienced an engine backfire during practice and did not make a lap during qualifying, leaving him last on the grid. At the end of lap two, he had passed Monroe, although both were about 13 seconds back of leader Sammy Smith. On Lap 4, Monroe pulled off the track, done for the evening with brake issues.

Finishing 24th was Alex Clubb, who was running inside the Top 20 early in the race before overheating issues hampered the #03 machine. Chris Martin Jr. also retired with overheating problems, finishing with 45 laps completed. The Bottom Five was rounded out with two crash victims, Amber Balcean and Christian Rose. 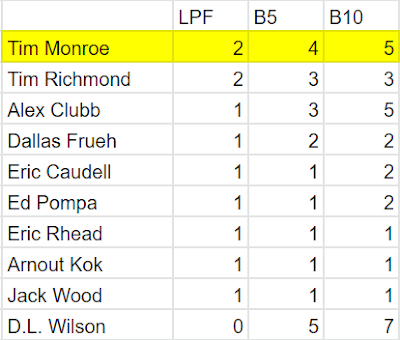