by Brock Beard
LASTCAR.info Editor-in-Chief
Rajah Caruth picked up the 2nd last-place finish of his NASCAR XFINITY Series career in Saturday’s Explore the Pocono Mountains 225 at the Pocono Raceway when his #44 Martin De Porres Chevrolet was in a two-car crash after just 1 of the race’s 90 laps.
The finish, which came in Caruth’s third series start, was his second of the season and first since Dover, nine races ago. In the XFINITY Series rankings, it was the 29th for the #44, the 366th from a crash, and the 599th for Chevrolet. Across NASCAR’s top three series, it was the 69th for the #44, the 1,295th from a crash, and the 1,849th for Chevrolet.
Over the last three months, Caruth has continued to enjoy a strong season in the ARCA Menards Series. Tw weeks after the Dover race, he finished a career-best 2nd at Kansas, less than a second behind teammate Nick Sanchez. He then led 27 laps the next race in Charlotte – also a new career high – and finished 3rd. He’d also made his Truck Series debut at Gateway, where he finished 11th and on the lead lap for Spire Motorsports.
The Pocono race would see Caruth pull double-duty between ARCA and the XFINITY Series. In Friday’s ARCA race, he took home 4th, which is already his fifth Top Five and eighth Top 10 in just 10 races so far this season. On the XFINITY side, Caruth would reunite with Alpha Prime Racing, who he raced for in his previous two starts at Richmond and Dover. The blue-and-white car carried primary sponsorship from the Martin De Porres Youth and Family Services foundation, whose group home for at-risk children and families is located in Jamaica, New York. A video by Caruth is on the foundation’s homepage.
Caruth was one of 39 drivers entered for the XFINITY Series race, meaning just one team would be sent home. That was decided in practice, where Brennan Poole blew a right-front tire and hit the Turn 3 wall in Mike Harmon Racing’s #47 Chevrolet. Interestingly, Poole’s car still carried the Solid Rock Carriers sponsorship that Bobby McCarty, Jr. brought to the team last week in Loudon, where he DNQ’d. Poole didn’t turn a lap in qualifying, and neither did J.J. Yeley, whose team needed to change engines on his #66 Coble Enterprises Ford. Yeley ended up securing the 38th spot with Poole sent home. Caruth, who ran 31st in practice, started just a few spots ahead of Yeley in 32nd with a lap of 162.549mph (55.368 seconds). After Todd Bodine crashed out of the Truck Series race that morning, Caruth’s #44 team bought Bodine’s three remaining sets of tires.
While Yeley incurred a redundant tail-end penalty for the engine change, he was 37th across the stripe when the green flag dropped. He’d pulled three-tenths of a second ahead of teammate Timmy Hill, whose #13 CrashClaimsR.Us Toyota was reported to be smoking on pit road before he rolled off. Hill took the green flag on track, but by the end of Lap 1 had fallen from 3.76 to 7.094 seconds back of the leader, 0.289 behind Yeley. The gap steadily increased through Lap 2, when trouble broke out ahead of them.
Coming off Turn 3, Caruth had climbed to 27th and racing to the inside of Alex Labbe in the unsponsored gray #36 Chevrolet. Just past corner exit, Caruth’s car broke loose and slid into Labbe’s, sending both sliding head-on toward the inside pit wall. The two slammed nose-first into the barrier just past the attenuator with Labbe’s car briefly coming off the ground. Under the ensuing caution, both drivers climbed from their cars under power, each out of the race. Caruth, classified behind Labbe, immediately took last from Hill, and the #36 was towed to the garage with the #44 following moments later. Caruth immediately took the blame for the accident, saying he’d made a mistake.
The rest of the Bottom Five was filled by another incident off Turn 3 that became a multi-car pileup on Lap 46. The incident began when Santino Ferrucci’s #26 Freedom Alliance Toyota spun off the corner. Lost in the smoke, Ricky Stenhouse, Jr. struck Ferrucci’s car with his #48 Big Machine Spiked Coolers Chevrolet, which cut hard to the left. Jeb Burton attempted to thread the needle in his #27 PurYear Tank Lines Chevrolet, only to be struck by Stenhouse and sent rolling onto his roof. All drivers involved walked away without serious injury, including Ronnie Bassett, Jr., whose #77 Jerry Hunt Supercenter Chevrolet was also involved in the Burton wreck.
LASTCAR STATISTICS
*This marked the first last-place finish for the #44 in a XFINITY Series race at Pocono.
THE BOTTOM FIVE
38) #44-Rajah Caruth / 1 lap / crash
37) #36-Alex Labbe / 1 lap / crash
36) #77-Ronnie Bassett, Jr. / 45 laps / crash
35) #26-Santino Ferrucci / 45 laps / crash
34) #48-Ricky Stenhouse, Jr. / 45 laps / crash
2022 LASTCAR XFINITY SERIES OWNER'S CHAMPIONSHIP
1st) Alpha Prime Racing (4)
2nd) JD Motorsports, JR Motorsports, Mike Harmon Racing, Motorsports Business Management (2)
3rd) Big Machine Racing, Jesse Iwuji Motorsports, Kaulig Racing, Richard Childress Racing, Sam Hunt Racing, SS-Green Light Racing, Stewart-Haas Racing (1)
2022 LASTCAR XFINITY SERIES MANUFACTURER'S CHAMPIONSHIP
1st) Chevrolet (14)
2nd) Toyota (3)
3rd) Ford (2)
2022 LASTCAR XFINITY SERIES DRIVER'S CHAMPIONSHIP 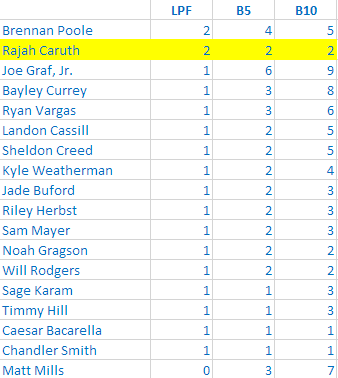