Takuma Sato finished last for the 16th time in his NTT IndyCar Series career in Sunday's Honda Indy Toronto at Exhibition Place when his #51 Deloitte Honda retired with crash damage without completing any of the race’s 85 laps.

The finish came in Sato’s 208th series start and was his first since Laguna Seca last year, eleven races ago.

The 2022 season has not been kind to Takuma Sato. After starting off with a top-ten finish on the streets of St. Petersburg, he has bested that result only once since in the seven races leading into Toronto. Adding to the disappointment is that twice Sato qualified in the top three, only to see a crash eliminate a chance for a good showing. He started third at Texas and had a second-place starting spot at Belle Isle, which was mitigated when his team went with a three-stop strategy. After that, Sato led a single lap at Road America in June and had a quiet Mid-Ohio race earlier in July, starting 19th and finishing 14th.

The entry list slimmed down to 25 for Toronto - all full-time entrants. Tatiana Calderon’s sponsor Rokit defaulted on payments, leaving the #11 car off the grid for the foreseeable future in both Calderon’s scheduled road and street course starts, plus J.R. Hildebrand’s oval starts. Additionally, Kyle Kirkwood’s #14 machine carried Sexton Properties sponsorship instead of Rokit branding.

First practice saw a couple of familiar faces at the bottom of the speed charts, with Dalton Kellett clocking in 25th with a 1 minute, 3.08 second lap. Jimmie Johnson was not far ahead with a 1:03.02 fast lap. Second practice saw a less familiar face at the bottom, as Josef Newgarden ran one warmup lap before his oil pressure light came on, ending his session. Besides his 1 minute, 21 second lap, Kellett was again the slowest, having a rough go of it at his home race.
An eventful qualifying session led to yet another anomaly at the bottom of the lineup. Conor Daly was the final car to leave pit road for Group 1 in qualifying. A stackup led to Colton Herta coming up on Daly while Daly was still on his warmup lap. That resulted in Daly having his two fastest laps deleted, and the session was red-flagged on Daly’s third timed lap. After the red was lifted, Daly tried to complete a lap but the session was stopped again before enough time had passed to put a time in the books. Due to this, Daly had no time in the books and was relegated to the back of the lineup on the initial start. Dalton Kellett also missed qualifying due to a fuel system problem, but as he was in Group 2 for qualifying, he slotted in last of the 12 and secured the 24th starting spot compared to Daly, who was 13th in Group 1, good for 25th.

After a strung-out field got their act together to grid so that the green flag could fly on the first lap, Daly remained in last, about four-tenths off of the Dalton Kellett machine. The field had barely taken the green flag when IndyCar Radio reported a single car in the outside wall. The car in question was Sato and the turn in question wound up being Turn 2, where Sato pushed up the track and hit the wall. The impact completely dislodged the left-front suspension, and the car only drove on three tires after that. He was visibly behind the field, and the Peacock broadcast crew identified the car as Sato by Turn 4. Despite being able to drive his car back to the pit lane, the debris flying off his car necessitated a caution.

After pitting on Lap 24 to try and diagnose a problem, the engine on the Kellett car let go after 30 circuits completed. Alexander Rossi rounded out the Bottom Three, the victim of contact with Felix Rosenqvist during the race's middle stages. 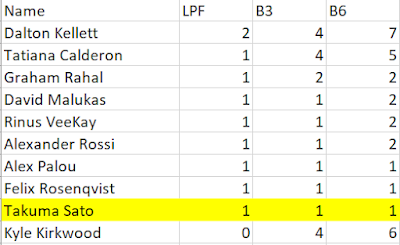