The finish came in Rosenqvist’s 54th career series start, and was his first since Belle Isle last year, sixteen races ago.

After some uncertainty about the entry list, the field remained at a full 27 cars, the same as it was at Road America. Simona de Silvestro and Paretta Autosport tested in between the two events and entered the race, still with plenty of support from Ed Carpenter Racing. After some rumors that Rokit stopped paying the team, A.J. Foyt Racing team principal Larry Foyt confirmed that enough funding had been received to put the Tatiana Calderon car on the grid for Mid-Ohio, although the status of anything past this weekend is still to be determined.

Jimmie Johnson anchored the practice charts in first practice, running a best time of 1 minute, 9.8 seconds. Calderon was the only other driver within a second of Johnson in practice, and then was the slowest car in the second practice, with her and teammate Dalton Kellett the only entries in the 1:09 time bracket in that session. Rosenqvist was third fastest in opening practice and settled into the mid-pack at 15th in second practice. Johnson returned to the bottom spot in the qualifying session, with Rosenqvist slotting in fourth.

Heading into the race, the Arrow McLaren SP team looked to be one of the most formidable duos on the grid. Rosenqvist’s teammate, Pato O’Ward, qualified on the pole position. However, all the excitement would have to hold off for a little while longer, as race control deemed that the initial start was too spread out. On the second go-around, the field looked a little better, but despite being the only car slated to start in Row 14, Johnson was even with Calderon through the first few corners.

On Lap 9, Rosenqvist was slow through turn two, and briefly got up to speed on the backstretch before a plume of smoke rose from the rear of the car. Rosenqvist pulled his machine into the grass and exited the car, clearly frustrated that such a promising day went awry.

Kyle Kirkwood, running Sexton Properties branding instead of Rokit branding this weekend, was the next car to retire from the race, taking a hard hit into the barriers on Lap 29. Teammate Calderon completed the Bottom Three, running into the turn five gravel trap. O’Ward fell out a mere one lap after Calderon, falling victim to a gradual loss of power. That event bookended a nightmarish sixty minutes for the Arrow McLaren SP team, which went from having two cars starting in the first four cars to having two cars finish among the last four. 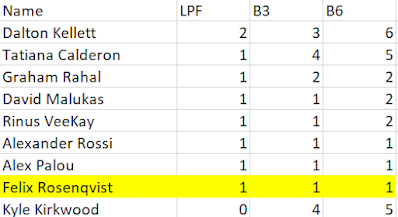