Felix Rosenqvist scored the 4th last-place finish in his NTT IndyCar Series career in Saturday’s Hy-VeeDeals.com 250 at Iowa Speedway when his #7 Arrow Chevrolet crashed out after completing 109 of the race’s 250 laps.

The finish came in Rosenqvist’s 56th career start and was his first since Mid-Ohio earlier this year, two races ago.

In the one IndyCar race weekend between Mid-Ohio and Iowa, Rosenqvist performed admirably at Exhibition Place in Toronto, qualifying eighth, finishing third and leading a lap. The performance brought the Swede back into the top ten in series points after falling to 11th in the standings following Mid-Ohio.

The entry list for both Iowa races saw the same 26 cars. Absent again was the A.J. Foyt Racing #11 car, which was originally scheduled to be run by veteran driver J.R. Hildebrand this weekend. However, with no Rokit sponsorship to be found, Hildebrand has turned his attention to securing sponsorship for a potential sports car season in 2023. The one part-time entry was the other oval ringer in the series, Ed Carpenter. While having three Ed Carpenter Racing entries used to be a rare occurrence throughout the course of a season, ECR has scaled up considerably this year as they are the driving force behind the #16 Paretta Autosport entry whenever that hits the track as well. For this event, Carpenter would pilot the #33 machine.

There was only one practice session due to the condensed weekend. Rookie Kyle Kirkwood sat at the bottom of the charts, running a fast lap of 19.29 seconds. Kirkwood was running Sexton Properties logos on his machine again this race, and his lack of pace in practice could be contributed to the sheer lack of oval experience that one accrues on the Road to Indy ladder. In Kirkwood’s lone Indy Lights season last year, only two races were contested on ovals, and those were a doubleheader at Gateway. Fellow rookie Devlin DeFrancesco was 24th on the charts and the other Road to Indy graduate in the field, David Malukas, was 18th-fastest in a less-than-banner showing for IndyCar’s developmental system.

In qualifying for the first race of the doubleheader, Malukas wound up with a sixth-place effort in a remarkable turnaround; he outqualified Rosenqvist in 11th, DeFrancesco in 18th and Kirkwood in 24th. Dalton Kellett was the last-place qualifier, clocking in at 18.7 seconds for the 7/8-mile lap.

Starting alongside Kellett in Row 13 was Graham Rahal, who almost immediately moved past Kirkwood. Kellett remained last at the end of Lap 1, 8.7 seconds back of the lead. Kellett continued to drop back in last until the first caution on Lap 17 for a spinning Jimmie Johnson. At that point in time, many of the cars in the back of the running order hit pit road, and Kellett leapfrogged Ed Carpenter on pit road. Carpenter was unable to pass Kellett and was the last car in the running order until green-flag pit stops commenced on Lap 47, when Simon Pagenaud, Conor Daly, Jack Harvey, Takuma Sato, and Rahal all took turns in the final position.

After pit stops cycled, Kellett retook last. It only lasted for a mere five laps in between Laps 74 and 78, until Carpenter made another pit stop. Simon Pagenaud fell from 19th to 23rd in the span between Laps 83 and 93, when he pitted and took last from Carpenter. He remained there until Rosenqvist, who had settled into the ninth position following the first round of pit stops, lost the rear end of the car going into turn three on Lap 110 and slid into the outside wall, destroying the rear of his car and ending his race.

Carpenter was the only other car that failed to finish the race, victim of another solo crash after 160 laps complete. Colton Herta rounded out the Bottom Three, eight laps down at the finish of the race due to transmission issues. 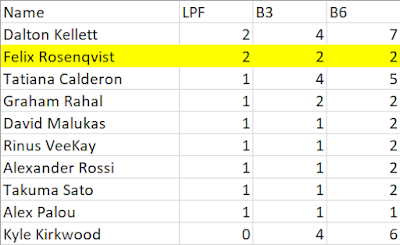