Christian Lundgaard finished last for the 1st time in his NTT IndyCar Series career in Sunday’s Hy-Vee Salute to Farmers 300 at Iowa Speedway when his #30 Shield Cleansers Honda fell out with a brake failure after completing 112 of the race’s 300 laps.

Danish driver Christian Lundgaard began his international karting career in 2012 at age 11 and spent a half-decade in the European karting scene before moving up to Spanish F4 in 2017. After scoring the championship in that series, he moved up to GP3 in 2018 and stayed with that series as it was rebranded as Formula 3 in 2019. Lundgaard finished sixth in the championship points with ART Grand Prix and moved up with the same team to Formula 2 in 2020.
After one-and-a-half challenging seasons in F2, Lundgaard, sensing that doors were closing in Europe, ran a third Rahal Letterman Lanigan Racing entry at the Indianapolis road course race in August as the team auditioned drivers for a third entry in 2022. After an impressive fourth-place qualifying effort and a 12th-place finish in the race, RLL tabbed him for its #30 entry in 2022, replacing the departing Takuma Sato. In his debut season this year, Lundgaard has been a revelation for RLL, which as a team is mired in a terrible slump. Coming into the Iowa doubleheader, Lundgaard had three top-ten finishes on the year and no finishes lower than 19th in a remarkable show of consistency.

Dalton Kellett was once again the final starter on the grid, although Devlin DeFrancesco would join him in Row 13 after qualifying 18th for Saturday’s race. Lundgaard clocked the 17th-fastest lap in the field.

There was a fair amount of shuffling in the running order during the opening lap as 23rd-place starter Graham Rahal fell back to the last spot in the running order. Rahal was seven seconds in arrears to the leaders after two laps and eight seconds back after three. He passed Kellett for 25th on Lap 5 and Kellett eventually evened out at about a second back of Rahal while falling steadily to the leaders. He was 13 seconds back on Lap 11 and 20 seconds back of the lead on Lap 29 before being lapped by Will Power on Lap 31.

Conor Daly moved into last on Lap 40 as he made an early pit stop, but the main early-race storyline emerged when Simon Pagenaud hit the pits on the same lap due to radio issues. Race control black-flagged the #60 Meyer Shank Racing entry because he could not hear his crew chief or spotter, which could lead to a crucial lack of awareness at a short track such as Iowa. The team took roughly 16 laps in the pits to fix the issues before the French driver went back out on the racetrack, even un-lapping himself once during a green-flag pit cycle to go only 15 laps down. He remained last, just behind teammate Helio Castroneves, who was penalized during the first pit cycle and was running 25th.

Quietly, Lundgaard entered the pits on Lap 113 from the 15th position, and the crew eventually took the car right behind the pit wall so as to not take up a pit stall during the next round of pit stops. However, on Lap 117, Kyle Kirkwood went straight into the turn one wall and then rolled down into the inside wall, collapsing the front suspension and ending his day. At this point, the broadcast crew had not mentioned Lundgaard’s problems, and it seemed as though Kirkwood was primed to secure the first last-place finish of his IndyCar career. Kirkwood was being lapped by Josef Newgarden on the frontstretch when Rinus VeeKay, who had just pitted, dove under Newgarden into Turn 1 to unlap himself on fresh tires. Kirkwood entered Turn 1 outside of the racing line and lost traction on the slick track, heading into the wall.

During the ensuing caution, Lundgaard’s team was shown working on the car, indicating that Kirkwood still was the likely last-place finisher, even with more laps completed than Lundgaard. However, the RLL crew eventually found that the issue was terminal and retired the car, handing last place to Lundgaard. Newgarden rounded out the Bottom Three, the victim of a crash when a part failed on the car while leading on Lap 236. After the race, Newgarden fell and hit his head and spent the night in an area hospital, although all brain scans came back clear. He will be evaluated by the IndyCar medical team for fitness to race in this weekend’s Indianapolis Grand Prix on Thursday. 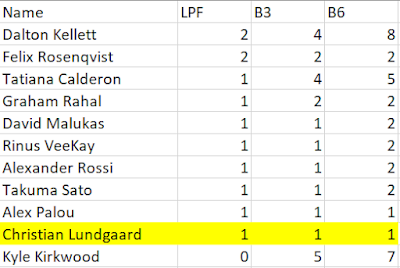