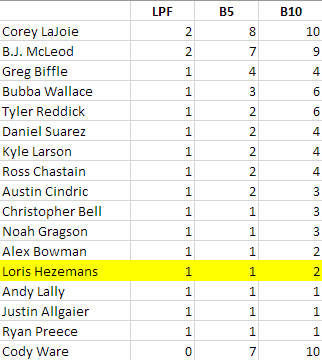 For context (I was in the bleachers at Turn 13) - Lajoie pulled off the track in Turn 5 during the opening pace lap and sped pretty hastily to the garage, so he was out there initially but didn't even make it to the one-to-go signal.

Also am a bit surprised with Hezemans' comments given that the 78 of Tilley was even slower and sounded a bit down on power the whole day.

For context (I was in the bleachers at Turn 13) - Lajoie pulled off the track in Turn 5 during the first pace lap and sped pretty hastily to the garage, so he was out there initially but didn't even make it to the one-to-go signal.