by Brock Beard
LASTCAR.info Editor-In-Chief
B.J. McLeod picked up the 9th last-place finish of his NASCAR Cup Series career in Sunday’s Ambetter 301 at the New Hampshire Motor Speedway when his #78 My/Mochi Ice Cream Ford was collected in a multi-car accident after 4 of 301 laps.
The finish, which came in McLeod’s 101st start, was his fourth of the season and second in a row, following his wreck at Atlanta last week. In the Cup Series’ last-place rankings, it was the 29th for the #78, the 632nd from a crash, and the 772nd for Ford. Across NASCAR’s top three series, it was the 43rd for the #78, the 995th for Ford, and the 1,293rd from a crash.
In anticipation of National Ice Cream Day, the Live Fast Motorsports team welcomed new sponsorship from My/Mochi, a company that sells 17 flavors of small dough-covered ice cream balls. The Loudon track was the site of McLeod’s Cup debut in 2015, when he finished 34th for Circle Sport, and he ran a track-best 30th for the Live Fast effort just last year. In practice, he ran 35th of the 36 entries ahead of Cody Ware’s #51 Nurtec ODT Ford and qualified 32nd with a lap of 123.322mph (30.885 seconds).
Ware rolled off 36th and last, and remained in that position as no drivers incurred pre-race penalties. At the stripe, he pulled just one-thousandth of a second ahead of Ty Dillon’s #42 Allegiant Chevrolet. By the end of Lap 1, Dillon had moved up to 33rd with Ware now back to last, 5.097 seconds back of the lead and just 0.342 behind J.J. Yeley, his Rick Ware Racing teammate, in the #15 Adirondack Tree Surgeons Ford. The next time by, Yeley climbed past Josh Bilicki’s #77 Zeigler Auto Auto / Ditec Marine Chevrolet. Over the following circuit, Ware began to track Bilicki down, halving his deficit from 0.803 to 0.456. A moment later, Ware’s spotter shouted, “Go low! Go low! Go low!”
With the news this week that he would be released from Petty-GMS Racing at the end of 2022, Ty Dillon continued to charge through the field and was already catching Justin Haley, who rolled off 25th in the #31 Chevrolet. On Lap 5, coming off Turn 2, Dillon got to the inside of Haley, who was himself racing under Chase Briscoe in the #14 Mahindra Tractors Ford. Dillon and Haley made contact, sending Dillon spinning up the track. Trapped in the wrong place at the wrong time was Alex Bowman, whose #48 Ally Chevrolet was struck in the left-front as Dillon spun nose-first into the wall. Behind Bowman came McLeod, who rear-ended the #48, followed a moment later by Bilicki, whose #77 spun into McLeod. Ware made it through safely to the inside as the caution came out.
On Lap 6, Bilicki took last from Ware as the #77 eventually followed Ty Dillon to pit road. Both crossed the starting line to complete their fifth laps, which on Lap 7 dropped McLeod to last with Bowman in 35th. Both Bowman and McLeod were being towed to the garage, McLeod through the rear entrance on the backstretch. The next time by, Bilicki’s car was too damaged to continue and was pushed behind the wall by the crew, eliminated under the “Damaged Vehicle Policy.” Ty Dillon’s crew likewise found their damage was terminal, and had stopped attempting repairs the on Lap 9. NASCAR summoned a tow truck to get the #42 off the track, putting four cars out of the show. NASCAR’s garage official confirmed all four drivers were out on Lap 29. Corey LaJoie rounded out the Bottom Five when the shifter on his #7 Built.com Chevrolet was stuck between gears, locking the rear tires and sending him into the Turn 1 wall.
McLeod became the first driver to score two consecutive Cup Series last-place finishes since Aric Almriola, who in May 2021 claimed back-to-back runs at Darlington and Dover.
LASTCAR STATISTICS
*The 4 laps McLeod completed is tied for the third-least in a Cup race at New Hampshire, matched by Ward Burton on July 1, 2007 and J.J. Yeley on July 15, 2012. The record shortest distance belongs to Geoffrey Bodine, whose #66 Discover Card Ford didn’t complete a lap due to rear end issues on July 21, 2002.
*This marked the first last-place finish for the #78 in a Cup race at New Hampshire since September 14, 2008, when Joe Nemechek’s #78 Furniture Row / DenverMattress.com Chevrolet was eliminated in a crash after 218 laps of the Sylvania 300.
THE BOTTOM FIVE
36) #78-B.J. McLeod / 4 laps / crash
35) #48-Alex Bowman / 4 laps / crash
34) #77-Josh Bilicki / 5 laps / crash
33) #42-Ty Dillon / 5 laps / crash
32) #7-Corey LaJoie / 88 laps / crash
2022 LASTCAR CUP SERIES OWNER'S CHAMPIONSHIP
1st) Live Fast Motorsports (5)
2nd) Spire Motorsports (3)
3rd) Hendrick Motorsports, Trackhouse Racing (2)
4th) 23XI Racing, Joe Gibbs Racing, Kaulig Racing, NY Racing Team, Penske Racing, Richard Childress Racing, Rick Ware Racing, Team Hezeberg (1)
2022 LASTCAR CUP SERIES MANUFACTURER'S CHAMPIONSHIP
1st) Chevrolet (10)
2nd) Ford (8)
3rd) Toyota (2)
2022 LASTCAR CUP SERIES DRIVER'S CHAMPIONSHIP 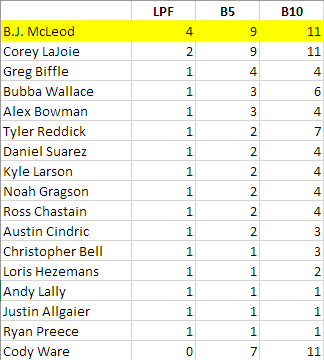