ARCA: Clubb’s return to the track nets him first ARCA last-place finish since 2020

by William Soquet and Ben Schneider
LASTCAR.info Staff Writer and Guest Contributor
Alex Clubb finished last for the 3rd time in his ARCA Menards Series career in Friday’s General Tire Delivers 200 at Pocono Raceway when his #03 Clubb Racing Ford fell out with an oil cooler failure after 7 of 68 laps.
The finish came in Clubb’s 23rd career start, and was his first since the season-finale in 2020 at Kansas, 30 events ago.
In the offseason between 2020 and 2021, things were looking up for Clubb, as he formed an alliance with another northern Illinois racing family, the Richmonds. Together, they formed Richmond Clubb Motorsports, which would see Clubb and Tim Richmond split the 2021 ARCA Menards Series schedule behind the steering wheel. At the start, things were bright, with Clubb scoring top-ten finishes in his first two races of the season at Kansas and Toledo. However, success was harder to find throughout the rest of Clubb’s limited schedule, and following his final race at Milwaukee, Clubb and the Richmonds had a less-than-amicable split.
After that, Clubb did what he knew, and went back to running his own team, expanding to a full season operating his own #03 car while bringing in a variety of drivers - including Josh White and Rita Thomason - to drive in some of the races. At Elko a few races ago, Clubb was behind the wheel and barely avoided a last-place finish when his team found a replacement master cylinder at the track and got the car to the grid less than an hour before the start of the race.
A stout 28-car entry list preceded the weekend’s racing, despite only having one debutant in the field. That driver was Jake Finch, son of longtime NASCAR team owner James Finch, who piloted a fourth Venturini Motorsports entry. A number of part-time teams also emerged for the race, with Sean Corr and Empire Racing, Ed Pompa and Jeff McClure Racing, and Christian Rose with Cook Racing Technologies making starts. Brandon Jones offered a rare “NASCAR Invader” start at a track not named Daytona or Talladega. The entry list was supposed to be even bigger, but Richmond Racing felt that there were structural issues with their lone car that would’ve raced Pocono, withdrawing the entry that Con Nicolopoulos was supposed to drive. Nicolopoulos’ sponsors ended up adorning the #48 machine of Brad Smith.
There was a lone practice session that also wound up setting the starting lineup, as qualifying was eventually rained out. Clubb was 27th of 28th in the order, running a fast lap of 1 minute, 3.429 seconds across ten laps. The only car he beat was that of D.L. Wilson for Fast Track Racing, who was about three and a half tenths of a second behind Clubb. Wilson intended to run the full race, only to ultimately suffer engine issues.
Almost immediately after the green flag dropped, Bryan Dauzat was slow on the track, although he was able to continue. Stephanie Moyer also made an early unscheduled pit stop, cycling to last before going out on track and running to the completion of the race.
By Lap 7, the leaderboard showed Clubb as a lap down, and he pulled off the track with a puncture in the oil cooler, done for the day. Dauzat retired with radiator issues having the same number of laps completed. Zachary Tinkle was 25th in the running order, the victim of contact that sent him straight into the Turn 1 wall on Lap 21. He was driving the #06 for Wayne Peterson Racing, WPR’s first start since Iowa earlier this year. Rounding out the Bottom Five were Wilson and Rose, both completing 32 laps.
THE BOTTOM FIVE
28) #03-Alex Clubb / 7 laps / oil cooler
27) #57-Bryan Dauzat / 7 laps / radiator
26) #06-Zachary Tinkle / 19 laps / crash
25) #12-D.L. Wilson / 32 laps / electrical
24) #42-Christian Rose / 32 laps / electrical
2022 LASTCAR ARCA MENARDS SERIES MANUFACTURERS CHAMPIONSHIP
1st) Ford, Chevrolet (4)
2nd) Toyota (2)
2022 LASTCAR ARCA MENARDS SERIES OWNERS CHAMPIONSHIP
1st) Fast Track Racing, Richmond Racing (3)
2nd) CCM Racing, Jones Racing, Bill McAnally Racing, Clubb Racing Inc. (1)
2022 LASTCAR ARCA MENARDS SERIES DRIVERS CHAMPIONSHIP 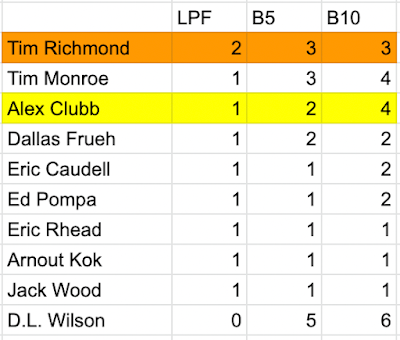