INTERVIEW: Brad Perez carries the LASTCAR.info logo to a 22nd-place finish at Sonoma

by Brock Beard
LASTCAR.info Editor-In-Chief
Following the grassroots effort that led to Brad Perez' second career Truck Series start at the Sonoma Raceway, LASTCAR.info joined as an associate sponsor of his #43 I Set My Friends on Fire Toyota. I caught up with Brad after he secured 32nd on the starting grid, locking himself in following the withdrawal of Travis McCullough's #47 for G2G Racing.

How was qualifying for you?
I mean, once we figured out that the 47 (McCullough) probably wasn't gonna make it, we figured if we just put a lap down that's decent, we'd be in the show. So I just kind of went out there and tried to run like a hard lap and like a really hard lap, since we were on---shout out to Timmy Hill, we were on (his) three-lap scuffs. So, it's pretty respectable time for being on scuffs. I'm happy about that. So you don’t win anything in qualifying, and just gonna have some fun in the race, really.
I heard your crew chief say you improved over your previous start at COTA.

Yeah, I got way better. I mean, obviously, there's a lot more to go. Experience is big, and getting better comes with more experience. But definitely, I was making so many mistakes at COTA – I was overdriving, I didn't really know what I was doing. I overdrove what I had, and because of that I did worse. So, we've been having a smooth weekend so far, keeping the brakes on it, keeping everything nice and cool. Keeping myself cool, like not trying to overstep myself. And Greg (Rayl, crew chief) has been doing really, really good job. We kind of click a little bit better now. It's our second race. And I made really good adjustments. So I feel like in the race where everyone's gonna be on really old tires, it's gonna be fun – slipping and sliding, keep them tires under me. I learned that from Will Rodgers – if he listens to this, thank you for that advice! It's limited slide and keep them tires under me. learn that from what Rogers if he listens to this. 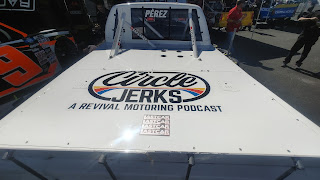 These quotes were after the conclusion of Saturday's race, where Perez finished on the lead lap in 22nd, two spots shy of matching his debut at COTA.

How was the race?

It was a sloppy race for me. I mean, middle of the race, I was really sloppy. . .I was making once again, making a ton of mistakes. I think it was honestly due to fatigue. So I'm gonna admit that I kind of like low-key fell out a little bit middle of the race. And then, I just had to reset. I was talking with, with Scott (Heckert) and Reed (Sorenson). And they're just like, I’d reset, get my bearings. Because middle the race we put on like 16-lap scuffs, and I didn't realize it. And I was like, “Yeah, that's probably the scuffs,” and I mean, I was so bad. Like, I was spinning the tires, trying to catch up to people and just forgetting like, I have literally 16 more laps than they do on tires, and I was overdriving. So we made a pretty good adjustments to help it turn in. I'm just mad that I damaged the freaking truck. I'm sorry about that, Josh (Reaume). You know, we were falling behind. I think it was (Stewart) Friesen – Friesen, (Matt) Crafton, the fast guys. And I was like, if I can hang with them, then we'll be fine. I was just riding And then somebody spotted at the top of (Turn) 3A, and that's like a blind spot for the spotter. And I didn't I didn't know they were spinning. The only time I knew they're spinning. As soon as I saw the smoke fly, I was like, “eh, maybe I should lift a little bit,” and then Crafton stopped. And I was like, “Ah, Damn!” and I slammed on the brakes. I still hit Crafton, so I feel bad for him. But all in all, I'm just glad to be finished (laughs).

There were several wrecks in the closing stages. Fortunately, Josh Bilicki was checked and released from his crash. How close were you to those incidents?

Dude, that happened like four trucks in front of me. And the only thing I saw is I saw somebody hit the inside wall, which doesn't happen. And then I saw somebody hit the outside wall, and I saw the 30 (Josh Bilicki) hit it hard. I think it was like right front first. And I was like, “Aw, shit, that was Bilicki.” So I was worried for him for a second because it looked like a hard hit. When I went around. I saw the whole right-front suspension was gone, clip destroyed. And I mean, I'm glad Biliki’s okay, thanks for telling me. (Friesen was checked and released.) And I think Haley was in that too. I think I saw them one. (Yes, Deegan was released before Friesen and Bilicki.). Good, good. Yeah. But that that was a hard hit. I was worried for a second. Either way. I mean, I cannot say enough about John Reaume, right here, that’s Josh’s dad. Greg Rayl, who comes in flies in to do this crew chief deal. He doesn't live here. He doesn't even live in North Carolina. He does this out of the goodness of his heart and he goes over the wall, too – crew chief that's going over the wall. We were damaged. In the middle of the race when that incident happened, there was no yellow. So I couldn't see (laughs). Like I was every uphill turn, I couldn’t see at all, but these guys got it fixed. I was able to see. And they let me continue on going. I mean, water temp didn't go above 220 - we're good. Radiator’s still on it and all that. I'm really, really happy about this. I mean, I'm hard on myself. I'm always hard on myself. But I'm happy that we're good.

Are there any other tracks you're anxious to try?

I really want to do Watkins Glen after the ARCA deal. It's tough to find XFINITY rides right now – XFINITY’s so competitive. A lot of people going home every week – it’s a tough deal right now. So, finding a ride and then also being better. I mean, I was 32nd (of 37) on speed. Obviously, I felt like I could have done better and maybe made the show on time. But you know, it's part of it. I have to get better at qualifying. I have to be in a situation where they trust me that I could do well. So I have a lot to prove and I definitely would like to do that race. Definitely Mid Ohio is on the map - and that's another crazy race. This is like “Mid Ohio Junior.” But I'll try to do them all if I could but road courses for sure.
Posted by Brock Beard at 10:03 PM