Alex Palou finished last for the 2nd time in his NTT IndyCar Series career in Sunday’s Sonsio Grand Prix at Road America when his #10 American Legion Honda failed to finish the race after completing 36 of the race’s 55 laps.

The finish was Palou’s first since the second Mid-Ohio race in 2020, 26 races ago.

Born in Spain, Palou came up through the gauntlet known as the European karting scene, eventually graduating to lower-level formula racing on the continent. He maintained a four-year relationship with outfit Campos, eventually running the sporadic Formula 2 race in 2017. Also in that year, Palou ran a full season of the Japanese Formula 3 Championship, finishing third in the championship. After one more year running European F3 in 2018, Palou went back to Japan, racing with Goh Motorsports in Super Formula during the 2019 season. A third-place finish in the points caught the attention of Dale Coyne, who signed Palou to drive for his IndyCar team in 2020. After another impressive season, Palou moved to Chip Ganassi Racing for the 2021 season. Keeping with the pattern, Palou more or less lit the IndyCar world on fire and won a championship on the merits of three wins. Coming into Road America, Palou sat fourth in the 2022 point standings.

A total of 27 cars took laps in the Sonsio Grand Prix, which was up one entry from last week in Belle Isle. The additional entry came in the form of Simona de Silvestro and Paretta Autosport, back on the IndyCar grid for the first time since the Indianapolis 500 last season. Whereas the team had an alliance with Team Penske last year, the Paretta team leaned on Ed Carpenter Racing for a number of resources this time around, the most visible aspect being ground mats in the paddock tents. Paretta will attempt two more road course races yet this season.

The Paretta entry came into the Road America weekend with no prior testing, and it showed early in the weekend, as the car was last in both of the two first practice sessions and the qualification session. de Silvestro was about half a second behind Tatiana Calderon in qualifying, which is less than it seems on a four-mile-long track. IndyCar scheduled a third practice instead of a morning warmup, and in that practice, de Silvestro moved up to 26th, dropping Callum Ilott to the 27th and final position in the last on-track action before the race.

The initial start of the race was an eventful one - even before the drop of the green. Rinus VeeKay did not fire along with the rest of the grid, leaving his race in doubt. However, VeeKay's Ed Carpenter Racing crew got him fired in time for the green, avoiding what would have been his second last-place finish in three races. Jimmie Johnson had barely cleared the first corner when he tried to set up a pass on Tatiana Calderon on the outside heading into a right-hand turn. Calderon drifted to the middle of the track and hit Johnson, sending the #48 machine into the gravel in Turn 3. The caution fell, and Johnson lost a lap during the process of getting the machine towed out of the gravel and refired by the safety truck.
On the ensuing restart, Marcus Ericsson dove under teammate Alex Palou entering Turn 5, sending Palou straight into the gravel trap. That car was towed off the track, perhaps signaling an end to Palou’s day. However, the Chip Ganassi Racing driver rejoined the field 10 laps down and kept plugging along until he could no longer gain any more points, at which point he pulled off the track and retired from the race. The exit was a quiet one, as IndyCar Radio did not pick up on it until the car was gone and the pit crew started to pack up the pit box. 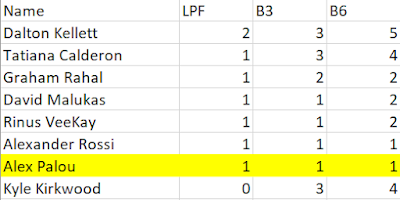