Paul Pedroncelli finished last for the eighth time in his ARCA Menards Series West career in Saturday’s Portland 112 at Portland International Raceway when his #31 Rancho Victoria Weddings Chevrolet fell out with brake issues after completing 1 of 42 laps.
The finish was Pedroncelli’s eighth in his last ten series starts.
Despite running the full race last year at Portland, Pedroncelli followed his familiar start-and-park form on Saturday to extend his streak of consecutive last-place finishes this season to three. While he is yet to be running at the finish since his career-best ninth-place run at Portland last season, Pedroncelli’s team indicated that he may go the distance at Sonoma this upcoming weekend. He made his series debut at the California track last season, where he finished 13th.
Following Pedroncelli up the running order was Dale Quarterley, a veteran driver who has primarily run the road course races in recent years. While Quarterley ran the ARCA season-opener at Daytona earlier this season, this was his first start in the West Series since Sonoma in 2019, where he finished 26th.
As the leaders crossed the start-finish line to begin Lap 3, Quarterley was seen pulling behind the wall in his #32 Van Dyk Recycling Chevrolet. Moments later, Pedroncelli followed suit and parked his car as well. While Quarterley and Pedroncelli completed the same number of laps, Quarterley completed his one lap ahead of Pedroncelli and made it back to the garage first, giving him credit for 15th, one spot in front of Pedroncelli in last-place.
The final car running at the end of the race was Vince Little, who made four starts in thirteen attempts in NASCAR’s Southwest Series between 2000 and 2004. Little finished six laps down in his West Series debut, as did Eric Nascimento, returning to the series for his first start of the season. Rounding out the Bottom Five was Andrew Tuttle, who worked his way up from a last-place starting position to bring his car home in a season-best 12th-place.
At the front of the field, Jake Drew started alongside polesitter Daniel Dye on the front row, but both drivers went off course on the opening lap as the drivers attempted to navigate the rainy conditions. When Tuttle stalled on the track to bring out a caution on Lap 9, Drew and Dye stayed out of the pits while others came in to make adjustments for help with visibility. This allowed Drew to inherit the lead from Lap 12 onwards as he scored his first career win.
The victory served as a bit of redemption for last year’s Portland race, in which Drew crossed the finish line first, but was relegated to tenth-place after cutting the frontstretch chicane in the closing laps. Following Drew in second was Connor Mosack, a Trans-Am driver who scored a career-best across both ARCA’s national tour and its East and West divisions. Other drivers with strong runs included Todd Souza in a season-best third, as well as Takuma Koga and Bridget Burgess, who equalled their career-best finishes of fifth and seventh respectively.
THE BOTTOM FIVE
16) #31-Paul Pedroncelli / 1 lap / brakes
15) #32-Dale Quarterley / 1 lap / electrical
14) #85-Vince Little / 36 laps / running
13) #4-Eric Nascimento / 36 laps / running
12) #39-Andrew Tuttle / 36 laps / running
2022 LASTCAR ARCA MENARDS SERIES WEST MANUFACTURERS CHAMPIONSHIP
1st) Chevrolet (4)
2022 LASTCAR ARCA MENARDS SERIES WEST OWNERS CHAMPIONSHIP
1st) Pedroncelli Racing (3)
2nd) Jones Racing (1)
2022 LASTCAR ARCA MENARDS SERIES WEST DRIVERS CHAMPIONSHIP 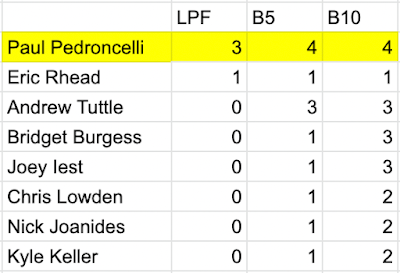