by Ben Schneider
LASTCAR.info Guest Contributor
Brian Kamisky finished last for the 1st time in his ARCA Menards Series West career in Saturday’s General Tire 200 at Sonoma Raceway when his #80 SK Construction / Wards Concrete / Hatori She Chevrolet did not start the event.
The finish came in Kamisky’s seventh career West Series start.
Hailing from Anderson, California, Kamisky made his first ARCA West appearance at the first race weekend after the pandemic shutdown, finishing eighth and ninth at the 2020 doubleheader at Utah Motorsports Campus. He returned to the series four times last season with a best finish of 13th at Roseville in October. Saturday’s race at Sonoma was set to be his first start of the 2022 season. However, he failed to make the grid for the race and was subsequently credited with a “did not start” status in 24th-place.
While Kamisky's was the only car absent from the race, Paul Pedroncelli was the only car absent from the combined practice/qualifying session, forcing him to start last on the grid. Nick Joanides’s #77 Toyota was the car with the slowest recorded time on Friday, unable to put down a true flying lap as he clocked in a lap of over 12 minutes. Andrew Tuttle and Vince Little were the only other drivers not to break the 1-minute, 30-second barrier, while Rodd Kneeland rounded out the Bottom Five in qualifying with a 1:26.389. Kamisky’s time of 1:24.233 was good enough for 14th, but per Vincent Delforge, his car blew an engine in during the session, forcing his team to withdraw from the race.
Following Kamisky up the running order was Pedroncelli, who did not end up going the distance as he did last year, pulling behind the wall with brake issues after he completed two laps. Joanides was the next retirement as he suffered a mechanical issue, forcing him out after Lap 8. Rounding out the Bottom Five were Sebastian Arias and Kneeland. Kneeland was battling with Bridget Burgess when the two drivers came together in Turn 7. They maintained contact exiting the corner, after which Kneeland then forced Burgess off track. Burgess responded by spinning him into the path of Sebastian Arias, who was attempting to pass them both. Burgess recovered to finish 10th, giving her back-to-back top-ten finishes after a seventh-place run at Portland last week.
Up front, Portland winner Jake Drew doubled down and converted pole position into his second career victory, leading 48 of 56 laps. Colby Howard took second after a three-wide battle for the spot sent Landen Lewis and Cole Moore spinning in Turn 11. Moore then attempted to rejoin the track and collected Dean Thompson, Ryan Philpott and P. J. Pedroncelli in the process. This promoted Dale Quarterley to 3rd, giving the 61-year-old veteran his best West Series finish since Irwindale in 2004.
This was the second West Series race in a row to be shortened from its scheduled distance. In a similar move to the Talladega race earlier this year, ARCA officials called the race during the final caution due to time constraints as NASCAR Cup Series practice was scheduled to begin at 1:30 local time.
THE BOTTOM FIVE
24) #80-Brian Kamisky / 0 laps / did not start
23) #31-Paul Pedroncelli / 2 laps / brakes
22) #77-Nick Joanides / 8 laps / mechanical
21) #4-Sebastian Arias / 22 laps / crash
20) #68-Rodd Kneeland / 22 laps / crash
2022 LASTCAR ARCA MENARDS SERIES WEST MANUFACTURERS CHAMPIONSHIP
1st) Chevrolet (5)
2nd) Ford (0)
3rd) Toyota (0)
2022 LASTCAR ARCA MENARDS SERIES WEST OWNERS CHAMPIONSHIP
1st) Pedroncelli Racing (3)
2nd) Jones Racing (1)
3rd) Brian Kamisky Racing (1)
2022 LASTCAR ARCA MENARDS SERIES WEST DRIVERS CHAMPIONSHIP 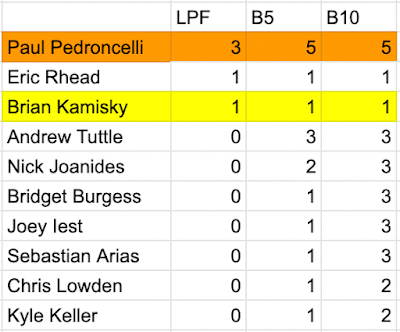