by Ben Schneider
LASTCAR.info Guest Contributor
Ed Pompa finished last for the 1st time in his ARCA Menards Series career in Saturday’s Zinsser Smart Coat 200 at Berlin Raceway when his #11 Cen Pe Co / Double H Ranch Ford failed to start the event.
The finish came in Pompa’s 73rd career start.
While Pompa had successfully avoided last-place in his national ARCA career, he was featured in a LASTCAR.info article earlier this season when he finished last at Dover in the ARCA Menards Series East. Pompa, who made his ARCA Menards Series debut in 2006, has run the majority of his career for Andy Hillenburg’s Fast Track Racing, usually running a handful of races per season for the Fast Track team. Saturday’s race would be his first at Berlin since 2016, when he finished 9th in a field of 25 entries. However, according to the team’s Facebook page, Pompa lost an engine during his qualifying run, forcing him to withdraw from the race and leaving him credited with a “reason out” of “did not start” and a last-place finish. Of the cars that were able to set a qualifying time, Brad Smith was the slowest, clocking in at 21.567 seconds in his #48 Copraya.com Chevrolet.
As they did at Dover, Fast Track entered four cars, all of which fell out in the first quarter of the race. Series newcomer Dallas Frueh was the lone non-Fast Track driver in the Bottom Five, retiring after three laps with an electrical issue. D.L. Wilson and Tim Monroe were the next to fall out, suffering from brake issues after nine and fourteen laps respectively. Zachary Tinkle completed the Bottom Five as the Fast Track car that went the furthest, completing 38 laps before a transmission failure ended his night.
Other notable finishes included Rita Thomason in 12th, who became only the second openly LGBTQ woman to compete in a NASCAR-sanctioned race after Lella Lombardi, who finished 31st in the 1977 Firecracker 400. Thomason, a Patrol Sargeant whose previous racing experience comes from Miata road racing, completed 41 laps before spinning out and retiring with a fuel pump issue. Despite recording a DNF, Brad Smith also generated some positive attention on social media by picking up just his second top-ten finish in his 392nd career start. Smith, whose first top-ten came with a ninth-place run at Winchester in 2020, inherited tenth-place after Amber Balcaen was involved in an accident on lap 66. Smith would eventually retire with handling issues after completing 136 laps.
Up front, ARCA East points leader Sammy Smith scored his first win in the main ARCA Menards Series, inheriting the lead from Daniel Dye with just six laps to go after Dye’s car fell off the pace with an electrical issue. Dye, who led all but eight of the race’s 200 laps, had to settle for seventh as his car stopped entirely with two laps to go. Dye’s misfortune promoted ARCA veteran Tom Hessert III to second place in his first ARCA start since 2018, while two-time reigning ARCA West champion Jesse Love completed the top-three.
THE BOTTOM FIVE
17) #11-Ed Pompa / 0 laps / did not start
16) #27-Dallas Frueh / 3 laps / electrical
15) #01-D.L. Wilson / 9 laps / brakes
14) #12-Tim Monroe / 14 laps / brakes
13) #10-Zachary Tinkle / 38 laps / transmission
2022 LASTCAR ARCA MENARDS SERIES MANUFACTURERS CHAMPIONSHIP
1st) Chevrolet, Ford (3)
2nd) Toyota (1)
2022 LASTCAR ARCA MENARDS SERIES OWNERS CHAMPIONSHIP
1st) Fast Track Racing (3)
2nd) Richmond Racing (2)
3rd) CCM Racing, Jones Racing (1)
2022 LASTCAR ARCA MENARDS SERIES DRIVERS CHAMPIONSHIP 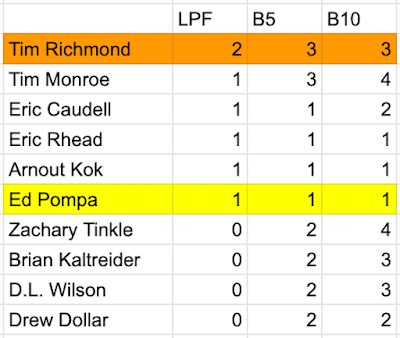