by Ben Schneider
LASTCAR.info Guest Contributor
Tim Richmond finished last for the 3rd time in his ARCA Menards Series career (and the 1st time in his ARCA Menards Series East career) in Saturday’s Calypso Lemonade 150 at Iowa Speedway when his #27 Circle Track Warehouse Chevrolet fell out with suspension issues after 2 of 150 laps.
The finish came in Richmond’s 3rd ARCA/ARCA East combo event and his 44th ARCA Menards Series start overall.
While much of the ARCA spotlight was on the West Series’ marquee event at Sonoma this past weekend, the main ARCA tour joined the East Series at Iowa for the first of three combination events between the two divisions this season. Although Richmond has always driven for entries that lack the funding of ARCA’s top teams, he has managed to avoid taking last place for much of his career. After he picked up his first last-place finish at Lucas Oil Raceway in 2020, he would go almost two full years before finishing last again until ARCA’s visit to Charlotte just two weeks ago.
On Saturday, however, Richmond encountered trouble with about ten minutes to go in practice, spinning in Turn 4 and damaging the right side of the car in the process. While the crew was able to make repairs, Colby Evans reported that the team made the decision to start-and-park to prevent sustaining any further damage in the race. Before the accident, Richmond had shown decent speed clocking in 16th of 22 cars that took time, nearly two seconds faster than the slowest car during the session.
Richmond’s practice time of 26.045 seconds would have also been good enough for 16th in qualifying, but the damage to his car prevented him from running a lap in the session. Brad Smith lost a few tenths from his practice speed, falling to a 28.297 in qualifying to line up 22nd on the grid. Richmond took the green flag behind Smith in the 23rd and final starting spot. He ran two laps before he pulled behind the wall to claim the last-place finish.
The next driver to retire from the race was New Smyrna last-place finisher Zachary Tinkle, who completed 16 laps before pulling behind the wall with brake issues. Three Fast Track Racing entries completed the Bottom Five: Stephanie Moyer, Tanner Allen, and D.L. Wilson made it 22, 52, and 53 laps respectively before heading to the garage.
At the front of the field, NASCAR Xfinity Series regular Brandon Jones backed up his victory in Charlotte by taking his second win of the season in his second of five scheduled starts in the #81 Joe Gibbs Racing Toyota. Jones took the win ahead of Sammy Smith’s #18 Toyota, the Kyle Busch Motorsports entry that previously belonged to JGR in the ARCA Menards Series the last several seasons.
THE BOTTOM FIVE
23) #27-Tim Richmond / 2 laps / suspension
22) #06-Zachary Tinkle / 16 laps / brakes
21) #01-Stephanie Moyer / 22 laps / brakes
20) #10-Tanner Allen / 52 laps / overheating
19) #12-D. L. Wilson / 53 laps / battery
2022 LASTCAR ARCA MENARDS SERIES MANUFACTURERS CHAMPIONSHIP
1st) Chevrolet (3)
2nd) Ford (2)
3rd) Toyota (1)
2022 LASTCAR ARCA MENARDS SERIES OWNERS CHAMPIONSHIP
1st) Fast Track Racing, Richmond Motorsports (2)
2nd) CCM Racing, Jones Racing (1)
2022 LASTCAR ARCA MENARDS SERIES DRIVERS CHAMPIONSHIP 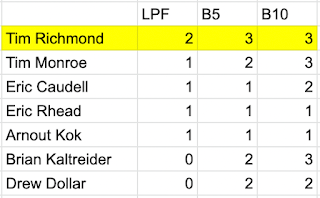 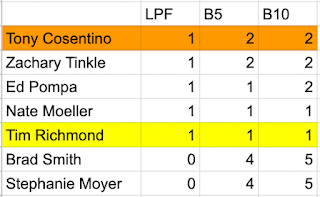 Brandon Jones? What's he doing in an ARCA race?