ARCA: Charlotte becomes second-straight race with a last-place finisher that did not start

Tim Richmond finished last for the 2nd time in his ARCA Menards Series career in Friday’s General Tire 150 at Charlotte Motor Speedway when his #27 Circle Track Warehouse Chevrolet did not start the race.

The finish came in Richmond’s 43rd attempt at an ARCA Menards Series race, and was his first since IRP in 2020, 40 races ago.

Much has happened in Richmond's career since he was last featured here. He continued running with Wayne Peterson Racing for the remainder of 2020, but then formed his own team with fellow Illinois racer Alex Clubb at the beginning of 2021, dubbed Richmond Clubb Motorsports. As part of the arrangement, Richmond was scheduled for eleven races in the 2021 ARCA schedule. After struggling in the early portion of the season, Richmond hit his stride in summer, finishing only one lap down at Iowa and making it through a tough Watkins Glen race in 17th. At Michigan, Thad Moffitt spun Drew Dollar in between Turns 3 and 4, sending Dollar up the track and straight into the path of an oncoming Richmond. The resulting impact fractured Richmond’s ankle and also broke his tibia, sidelining him for the remainder of the 2021 season and destroying one of the few cars in the fleet. David Gilliland Racing did give a car to the team to make up for it, which was used at Daytona to kick off the 2022 season as the rebranded Richmond Racing. Richmond has again planned to run eleven races, of which Charlotte would be the third.

The Charlotte entry list featured a fairly robust 26 cars for an intermediate track. Matt Wilson and CCM Racing returned after withdrawing from Kansas for Wilson’s series debut, and Ryan Huff returned with his family team. Joe Gibbs Racing fielded a second entry for Brandon Jones in his first of five ARCA races this year, and Bryan Dauzat ran with his Brother-In-Law Motorsports team. Cook Racing Technologies and Christian Rose entered in one of their scheduled races, and Josh White ran the first of his races with Clubb Racing. Fast Track Racing brought in Dick Doheny, Tony Cosentino, Tim Monroe and Tommy Vigh, Jr. to pilot their cars, and Venturini Motorsports fielded Parker Chase and Corey Heim in addition to their full-time drivers.

There was only a single combined practice and qualifying session for the race at Charlotte, and the troubles for the Richmond team began in earnest. The kill switch on the steering wheel was fixed in the “off” position, preventing the car from starting. Remarkably, the team was able to pinpoint the issue and fix it within the practice period, but first lap of practice, the rear panhard bar mount broke, which resulted in the driveshaft shifting and bursting the oil tank open, ending the weekend for good. Because he hit the track for the qualifying session, ARCA still credited him with last on the starting grid and results sheet, showing as a provisional in the former and a "did not start" in the latter.

Brad Smith was the slowest of the 25 cars that took time in qualifying, coming in two and a half seconds behind White. White was the first car to retire from the race, blowing a tire and crashing after completing three laps. Drew Dollar crashed with Daniel Dye and retired the next time by. Monroe and Doheny rounded out the Bottom Five, both falling out with mechanical issues before Lap 20. 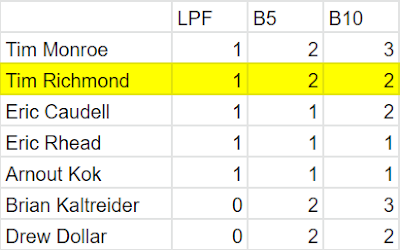