Sheldon Creed picked up the 1st last-place finish of his NASCAR XFINITY Series career in Saturday’s Mahindra ROXOR 200 at the Darlington Raceway when his #2 Whelen Chevrolet fell out with engine trouble after 16 of 147 laps.
The finish came in Creed’s 15th series start. In the XFINITY Series’ last-place rankings, it was the 5th for the #2, the 272nd from engine trouble, and the 593rd for Chevrolet. Across NASCAR’s top three series, it was the 34th for the #2, the 1,118th from engine issues, and the 1,837th for Chevrolet.
Prior to joining fellow Truck Series graduate Austin Hill as teammates at Richard Childress Racing’s XFINITY team, Creed had made just four series starts. He made his first two starts for Johnny Davis’ team on the road courses in Mid-Ohio and Road America, finishing just 34th and 38th, and was involved in a late-race crash when he made a one-off for JR Motorsports in the July 2019 race at Daytona, again placing him 34th. Ironically, he performed much better when he returned to the series with B.J. McLeod Motorsports, yielding a 10th-place showing just last November in the Phoenix finale.
Now driving full-time for RCR, Creed has still earned more inconsistent finishes than he had in his prior Truck Series ride with GMS Racing. He finished in the Top Ten in four of his first six starts, then ran no better than 22nd in the next three in a row before an 8th-place performance last week in Dover. A one-off return to the Truck Series in this year’s race at COTA was equally hot-and-cold – he started on pole, only to finish last with first-lap drivetrain issues.
At Darlington, where he'd run an inverted version of his red-and-white paint scheme, Creed ranked 10th-fastest of the 40 entrants, and secured 10th on the starting grid when rain washed out Friday’s nearly complete qualifying session. The two teams sent home couldn’t have been more different. First was the high-powered #88 HendrickCars.com Chevrolet fielded by JR Motorsports and driven by last week’s Dover winner Chase Elliott. Kicking off a multi-race deal with defending series champion Kyle Larson and two-time race winner William Byron, the team had everything on its side except enough Owner Points. On the other side was Mike Harmon Racing’s #47 Inspire Real Change Chevrolet, a team that has struggled to both qualify and finish all season. Brennan Poole managed to lock himself in on speed – only for the washed-out qualifying session to void the effort.
With the second round of Darlington’s “Throwback Weekend” for 2022, the 38th and final starting spot fell to Timmy Hill, whose #13 Coble Enterprises Toyota was designed after the late Ricky Hendrick’s old DuPont entry he campaigned in the series back in 1999. Joining him in the back was Ryan Truex, whose unsponsored #18 Joe Gibbs Racing Toyota struggled with speed in qualifying, and surrendered the 28th starting spot due to unapproved adjustments, specifically a brake rotor change. During the pace laps, 3rd-place starter Justin Allgaier pitted his #7 Hellmann’s Chevrolet for a battery change, and would also roll off in the tail end of the field.
By the green flag, Timmy Hill had reassumed his 38th-place spot due to an impound infraction, and would also serve a pass-through penalty at the end of Lap 1. Hill served the penalty, only to spin on the frontstretch on Lap 10, drawing the first yellow of the race. At the same time, Sheldon Creed had issues. As Creed would tweet later, he shifted from 3rd gear to neutral on the initial start, overrevving the engine. By Lap 17, Creed pulled behind the wall, and would ultimately not return as, much like Akinori Ogata in Friday’s Truck race, the damage to the engine proved too serious to repair.
Finishing 37th was Myatt Snider, whose #31 Capital City Towing Chevrolet, modeled after the iconic Red Baron Pizza Ford that Ken Schrader drove for Junie Donlavey in 1987, wrecked in Turn 3 after contact from Bayley Currey turned him into the outside wall. The only other retiree was Joe Graf, Jr., whose #07 Bucked Up Buckshot Energy Ford, modeled after Roy “Buckshot” Jones’ Georgia-Pacific scheme from the early 2000s, wrecked down the backstretch after contact from Anthony Alfredo’s 2002 Tom Hubert throwback, the #23 Dude Wipes Chevrolet. Brandon Brown took 35th in the #68 BrandonBilt Foundations Chevrolet, five laps down to race winner Justin Allgaier, who rebounded from his battery change. Josh Williams rounded out the Bottom Five, two laps ahead of Brown in the #78 Alloy Employer Service / Coolray Chevrolet.
Finishing a strong 12th was Kyle Weatherman, who reunited with the struggling Jesse Iwuji Motorsports entry in the #34 National Memorial Day Parade Chevrolet. In just four starts with the team since his DGM Racing entry scaled back to part-time, Weatherman has now twice given the Iwuji team their best-ever finish, having previously run 16th in Martinsville. This also stands as Weatherman's third-best XFINITY finish behind his pair of 8th-place runs for both DGM and Mike Harmon Racing.
LASTCAR STATISTICS
*This marked the first last-place finish for the #2 in a XFINITY Series race since October 31, 1998, when Ricky Craven’s #2 New Holland Chevrolet crashed after 10 laps of the AC-Delco 200 at Rockingham. The number had never finished last in a XFINITY race at Darlington.
THE BOTTOM FIVE
38) #2-Sheldon Creed / 16 laps / engine
37) #31-Myatt Snider / 73 laps / crash
36) #07-Joe Graf, Jr. / 135 laps / crash
35) #68-Brandon Brown / 142 laps / running
34) #78-Josh Williams / 147 laps / running
2022 LASTCAR XFINITY SERIES OWNER'S CHAMPIONSHIP
1st) Alpha Prime Racing, Mike Harmon Racing (2)
2nd) Big Machine Racing, JD Motorsports, Kaulig Racing, Richard Childress Racing, Sam Hunt Racing, SS-Green Light Racing, Stewart-Haas Racing (1)
2022 LASTCAR XFINITY SERIES MANUFACTURER'S CHAMPIONSHIP
1st) Chevrolet (8)
2nd) Ford (2)
3rd) Toyota (1)
2022 LASTCAR XFINITY SERIES DRIVER'S CHAMPIONSHIP 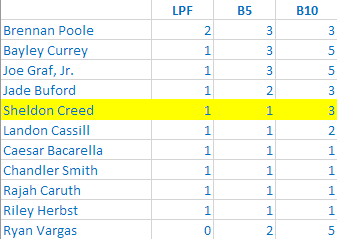