by Ben Schneider
LASTCAR.info Guest Contributor
Ed Pompa finished last for the 1st time in his ARCA Menards Series East career in Friday’s General Tire 125 at Dover Motor Speedway when his #11 Cen Pe Co / Double H Ranch Ford fell out with mechanical issues after completing 7 of 125 laps.
The finish came in Pompa’s fourth career East Series start.
An ARCA veteran, Pompa’s main goal through racing is to continue to raise money for the Double H Ranch camp in New York, a group that offers specialized programs for children with life-threatening illnesses. He made his ARCA Menards Series debut in 2006, finishing 25th at Pocono for Andy Belmont’s team. Since then, Pompa has consistently run a handful of races per season for Andy Hillenburg’s Fast Track Racing, splitting time between their various entries. More recently, Pompa made his debut in the then-newly rebranded ARCA Menards Series East in 2020. Three of his four career starts have come at Dover, with Friday’s start resulting in his first series DNF.
The Fast Track team brought a total of four cars to Dover, which helped fill a very short field of just 15 total entries. As all of Hillenburg’s cars pulled off the track in the early stages of the race, the team swept the bottom four positions in the finishing order. Talladega’s last-place finisher, Tim Monroe, completed just one more lap than Pompa before being listed out with a vibration. The 2019 ARCA Menards Series Rookie of the Year Tommy Vigh, Jr. also returned to ARCA competition on Friday, scoring a 13th-place finish. Stephanie Moyer was the fourth and final Fast Track car to retire from the race. Rounding out the Bottom Five was Brad Smith, who completed 81 laps before pulling off the track with around 30 laps to go.
At the front of the field, Taylor Gray scored his first career East Series win after leading 116 of 125 laps. Gray now has victories in both the East and West divisions of ARCA as well as the main ARCA Menards Series.
THE BOTTOM FIVE
15) #11-Ed Pompa / 7 laps / mechanical
14) #10-Tim Monroe / 8 laps / vibration
13) #12-Tommy Vigh, Jr. / 29 laps / mechanical
12) #01-Stephanie Moyer / 38 laps / mechanical
11) #48-Brad Smith / 81 laps / dnf
2022 LASTCAR ARCA MENARDS SERIES EAST MANUFACTURERS CHAMPIONSHIP
1st) Ford (3)
2022 LASTCAR ARCA MENARDS SERIES EAST OWNERS CHAMPIONSHIP
1st) Fast Track Racing (2)
2nd) Wayne Peterson Racing (1)
2022 LASTCAR ARCA MENARDS SERIES EAST DRIVERS CHAMPIONSHIP 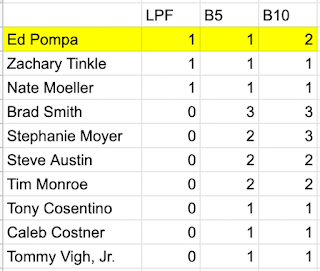