by Ben Schneider
LASTCAR.info Guest Contributor
Tony Cosentino finished last for the 1st time in his ARCA Menards Series East career in Saturday’s Music City 200 at Nashville Fairgrounds Speedway when his #12 Fast Track High Performance Driving Chevrolet fell out with brake issues after completing 22 of 200 laps.
The finish came in Cosentino’s fourth career East Series start.
An experienced late model competitor, Cosentino made his debut in the then-K&N Pro Series West in 2019, running three races for owner Kevin McCarty with a best finish of 15th in his debut at Evergreen Speedway. Last season, he joined Andy Hillenburg’s Fast Track Racing team in the ARCA Menards Series, where he has primarily run as a start-and-park entry. His only non-DNF to date is a career-best 10th-place finish at Winchester Speedway in 2021. Cosentino’s schedule so far this season has consisted of the East Series opener at New Smyrna and Saturday’s race at Winchester, where he finished 14th both times.
Just 17 cars showed up on the entry list, but only 14 actually started the race. Matt Wilson’s #22 CCM entry withdrew from the event, with Wilson eventually moving into Fast Track’s #10 car. Ashton Higgins was also set to return in his #49 entry, but he also withdrew. Finally, Pensacola last-place finisher Nate Moeller was scheduled to return with Wayne Peterson’s #06 team, but an accident in practice left the team unable to start the race.
After Cosentino, Brad Smith was the next to pull off the track as handling issues sidelined him after 27 laps. Christian Rose and Stephanie Moyer both fell out with transmission problems after completing 90 and 93 circuits respectively. Rounding out the Bottom Five was Ryan Roulette, the final car running at the finish.
At the front of the field, Sammy Smith took his third East Series win in four races this season. Smith currently holds a nine-point lead over Taylor Gray in the championship points standings as the series shifts to combination races with the main ARCA Menards Series for the remainder of the season.
THE BOTTOM FIVE
14) #12-Tony Cosentino / 22 laps / brakes
13) #48-Brad Smith / 27 laps / handling
12) #42-Christian Rose / 90 laps / transmission
11) #01-Stephanie Moyer / 93 laps / transmission
10) #11-Ryan Roulette / 182 laps / running
2022 LASTCAR ARCA MENARDS SERIES EAST MANUFACTURERS CHAMPIONSHIP
1st) Ford (3)
2nd) Chevrolet (1)
2022 LASTCAR ARCA MENARDS SERIES EAST OWNERS CHAMPIONSHIP
1st) Fast Track Racing (3)
2nd) Wayne Peterson Racing (1)
2022 LASTCAR ARCA MENARDS SERIES EAST DRIVERS CHAMPIONSHIP 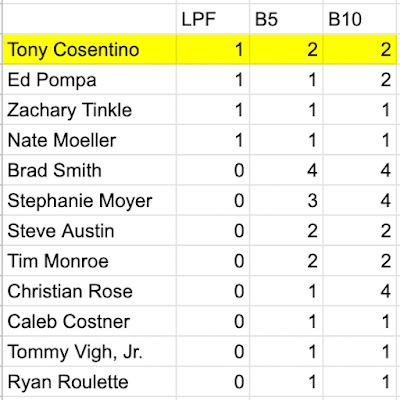