INDYCAR: Dalton Kellett first of many retirees at Long Beach

Dalton Kellett picked up the third last-place finish of his NTT IndyCar Series career in Sunday’s Acura Grand Prix of Long Beach when his #4 K-Line Insulators Chevrolet crashed after 5 of the race’s 85 laps.

The finish came in Kellett’s 27th series start and was his first since Road America last year, ten races ago.

A native of Ontario, Kellett started his racing career in one of the most Canadian ways imaginable – snowmobile racing. He eventually moved to go-karts and then to single-seater formula cars. The beginning of Kellett’s "Road to Indy" career came in 2012, when he ran in the USF2000 series for longtime team Pabst Racing. He spent the 2014 and 2015 seasons in Pro Mazda before spending four seasons in Indy Lights, three of them with Andretti Autosport and the last of those with Juncos Racing.
Heading into 2020, Kellett inked an eight-race deal with A.J. Foyt Racing, splitting the team’s #14 entry with Sebastien Bourdais. The ride was funded by K-Line Insulators, a business that has been in the Kellett family for multiple generations. The 2020 season went about as well as a pandemic-affected partial-season rookie year could go - he made his Indy 500 debut but his race ended in under 100 laps. For 2021, Kellett stepped up to a full-time role with the team and rejoined Foyt in that same capacity for 2022, serving as a team mentor to rookies Kyle Kirkwood and Tatiana Calderon. He made steady progress throughout 2021, ending with a promising lead-lap finish at Long Beach. His 2022 looked to be promising as well after he finished 17th at Texas.

No part-time entries joined the field for this Long Beach race, though Calderon stepped back into the #11 Foyt car after J.R Hildebrand drove it last week. There was a scare early in the weekend as Jimmie Johnson hit the tire barriers during practice on Friday and fractured his hand, but thankfully the fracture was not serious enough to prevent Johnson from participating for the rest of the weekend.

In practice, Johnson was one of three drivers who clocked a fast lap in the 1:08 time bracket, along with Devlin DeFrancesco and Takuma Sato. Calderon was the lone driver in the 1:09 bracket, and Kellett clocked in 18th, continuing the momentum from his Texas run. In qualifying, Johnson’s fracture showed itself, as he was the only driver in the 1:09 range. Calderon qualified in the 1:07 range, but due to being in Group 2 for qualifying, she wound up last on the starting grid for the race. Kellett slipped to 24th, starting in Row 12, directly in front of his teammate.

At the beginning of the race, the field strung out after the last hairpin, and as such, Calderon and Johnson were more than thirteen seconds in arrears at the end of the first lap, with Calderon about a half-second behind Johnson in 26th. She slipped to 19 seconds back after three laps and lost touch with Johnson, who steadily dropped Calderon. Kellett, meanwhile, passed Devlin DeFrancesco on Lap 2 and was running in 23rd when he locked up the brakes in Turn 1, skidding into the tire barriers and causing terminal damage to the nose of the machine. 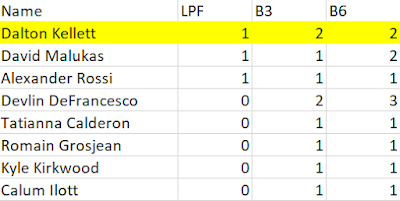