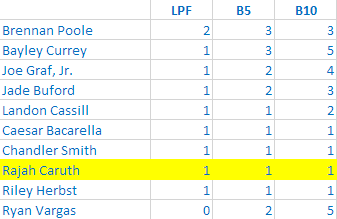 PREVIEW: Preece returns to Cup at Dover, where many XFINITY newcomers also rejoin the field

by Ben Schneider
LASTCAR.info Guest Contributor
Tim Monroe finished last for the 2nd time in his ARCA Menards Series career in Saturday’s General Tire 200 at Talladega Superspeedway when his unsponsored #01 Fast Track Racing Ford fell out with rear end issues after he completed 4 of 68 laps.
The finish came in Monroe’s seventh career series start; his other last-place finish came at Lebanon in 2020.
A lack of qualifying gave Monroe a tenth-place starting spot on the grid - however, he dropped to the back of the pack before taking the green flag. By Lap 3, Monroe was scored in 32nd-place of 33 cars, and on Lap 5, his car suffered a right-rear tire failure, causing him to spin out. While FS1 guest analyst Austin Cindric suggested that Monroe’s damage would likely not be terminal, the Fast Track Racing team elected to pull behind the wall after reportedly struggling to get the car’s window net back up.
Following Monroe up the results order was Brian Kaltreider, who lost an engine after completing nine laps. Sean Corr lost an engine of his own after Lap 17, though he returned to the track as a relief driver for Thomas Praytor, who exited the race during a red flag period due to flu-like symptoms. Bryan Dauzat completed just 36 laps to finish 30th, while Tim Richmond rounded out the Bottom Five as the first of many retirements from a frightening Lap 49 crash that left Scott Melton with a leg injury and saw Richard Garvie nearly flip over.
At the front of the field, Nick Sanchez took his second career victory after a controversial ruling from ARCA race control. With the Xfinity race still to run later in the afternoon, it was determined that the race’s upcoming restart with 13 laps to go would be the final one, and that the event would end with the next yellow or checkered flag - whichever came first. The caution was eventually displayed with nine laps remaining as Daniel Dye spun battling for the lead with Corey Heim. As Sanchez was in the lead at the moment of caution, he was declared the winner of the race. Heim, who ended up third behind Sanchez and Bret Holmes was visibly upset with the call in his post-race interview, calling the ending “a joke” and questioning the scheduling of both races considering the NASCAR’s self-imposed time constraints.
THE BOTTOM FIVE
33) #01-Tim Monroe / 4 laps / rear end
32) #07-Brian Kaltreider / 9 laps / engine
31) #8-Sean Corr / 17 laps / engine
30) #57-Bryan Dauzat / 36 laps / running
29) #27-Tim Richmond / 48 laps / crash
2022 LASTCAR ARCA MENARDS SERIES MANUFACTURERS CHAMPIONSHIP
1st) Ford (2)
2nd) Chevrolet (1)
2022 LASTCAR ARCA MENARDS SERIES OWNERS CHAMPIONSHIP
1st) CCM Racing, Jones Racing, Fast Track Racing (1)
2022 LASTCAR ARCA MENARDS SERIES DRIVERS CHAMPIONSHIP 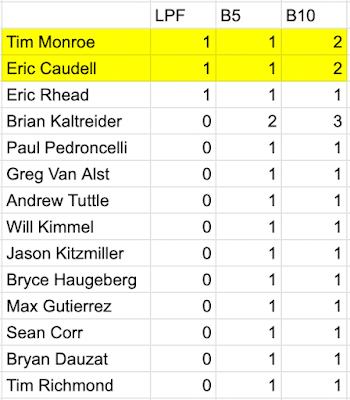 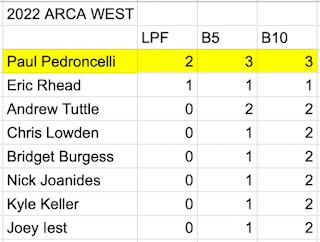 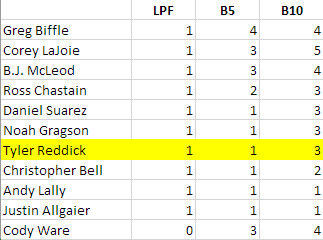 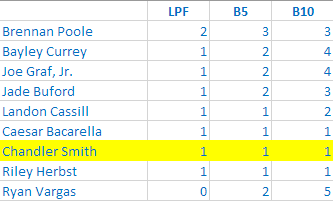 Posted by Brock Beard at 6:37 PM No comments: 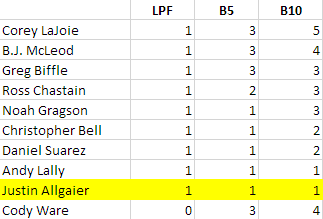 TRUCKS: Austin Wayne Self last at Bristol, where entire Truck field comes home under power for the first time in series history