Alexander Rossi finished last for the 2nd time in his NTT IndyCar Series career in Sunday’s XPEL 375 at Texas Motor Speedway when his #27 NAPA Auto Parts / AutoNation.com Honda retired with electrical problems after completing 11 of the race’s 248 laps.

The finish came in Rossi’s 99th career start and was his first since Texas in 2017, 73 races ago.

After emerging as a consistent IndyCar contender in the waning years of the 2010s, the 2020s have not treated Alexander Rossi kindly. He failed to score a finish above 15th until the fourth race of the pandemic-adjusted 2020 season, and although he finished strong with four straight podiums in the last five races, the early hole doomed Rossi to a ninth-place points finish. The 2021 season was even more of a disaster, with three finishes of 20th or worse in the first six races. His sole podium finish came at Portland in September, and Rossi finished a dismal tenth in points. At first, 2022 looked to be a reversal of fortunes when he grabbed the pole position for the season-opener at St. Petersburg. But this time, pit sequencing dropped the newly-redesigned blue-and-pink car to a 20th-place finish, a less than satisfactory outcome to think about for the month leading up to Texas.

The entry list featured a few fresh faces that weren’t at St. Petersburg. J.R. Hildebrand took the place of Tatianna Calderon in A.J. Foyt Racing’s #11 car, part of his run as the team’s oval driver for the year. Ed Carpenter was another driver starting his oval slate for the year, driving the #33 for his own team.

It was a rough start to the weekend for the Foyt team; Hildebrand was the slowest in first practice and teammate Dalton Kellett was 26th. Both were about four-tenths off the top lap by session leader Simon Pagenaud. Kellett improved to 22nd in qualifying with Hildebrand 26th. In the final spot was Graham Rahal, the last of three Rahal Letterman Lanigan Racing cars that all qualified 24th or worse. Rossi was incredibly average, clocking in 20th on the charts in first practice and 12th in qualifying. Hildebrand and Kellett again found themselves at the bottom of the charts for final practice, and directly ahead of them was Jack Harvey, who took a hard crash in this RLL Racing car during the session.

On Sunday morning, it was announced that Harvey had not been cleared for competition and that RLL would tap Santino Ferrucci to drive the #45. That late change dropped the #45 to the back of the field, and he was the only driver to incur a tail-end penalty on race day. At the start of the race, it was still Ferrucci in the back, although teammate Rahal made some quick moves and found himself knocking on the door of the top 20 after not too long. After six laps, Ferrucci was nine seconds back, although he hadn’t lost touch with Hildebrand nor Kellett.

About that time, Alexander Rossi became under investigation for jumping the start from the outside lane; soon afterwards, he was assessed a one-place penalty on the track. The driver was also complaining of the alternator light flashing, but with the crew in a holding pattern, Rossi continued running laps at pace. That didn’t last long, as he slowed on Lap 12. He brought the car to pit road, and while the pit crew initially planned to just replace the battery and call it good, the problem was soon discovered to be wider than that, and a frustrated Rossi exited the car, done for the day. Rossi reported that the battery just steadily lost voltage and that he didn’t really know the exact problem that ended his day.

Andretti teammate Romain Grosjean was 26th, done after smoke started trailing out of the exhaust at the 100-lap mark of the race. Kyle Kirkwood’s day ended in a solo crash after a handful of daring passes, the lone bright spot for Foyt in an otherwise forgettable weekend. 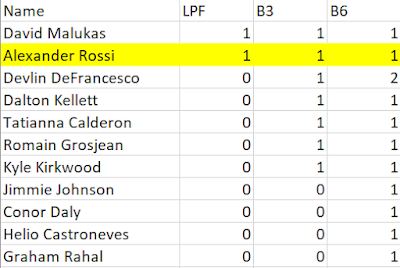