by Ben Schneider
LASTCAR.info Guest Contributor
Paul Pedroncelli finished last for the 6th time in his ARCA Menards Series West career in Saturday’s NAPA Auto Parts 150 at Irwindale Speedway when his #31 Pedroncelli Racing Chevrolet fell out with brake issues after completing 2 of 153 laps.
The finish was Pedroncelli’s sixth in his last eight series starts dating back to last season.
Regular LASTCAR readers will know that Pedroncelli’s prominence on this website is well-documented. P.J., his son, competes in the family’s main entry and even emerged as a surprise championship contender in 2021. Paul, meanwhile, runs the team’s second car mostly as a "start-and-park" operation. In fact, he has only been running at the finish three times in his ten West Series career starts.
However, the official ruling of Pedroncelli’s most recent last-place-finish is somewhat disputed. Currently listed at the bottom of Racing-Reference’s results is Sarah Burgess, the mother of full-time West Series driver Bridget Burgess. Originally from Australia, the Burgess family moved to the United States in 2008 to allow Bridget expanded opportunities to pursue a motorsports career. While Bridget is now in her third full season of West Series competition, her mother, Sarah, is also an accomplished racing driver who previously competed in off-road racing. The hard-working team does a lot with a little as Sarah currently serves as Bridget’s owner, crew chief, and, on some race weekends, her entire pit crew.
After a test run on Friday, Sarah was added as a late entry to the race in what would have been her series debut, making her and Bridget the first mother and daughter to compete against one another in an ARCA-sanctioned event. However, Sarah’s entry was withdrawn shortly before the event. While Racing-Reference currently credits her with a 16th-place finish and “dns” (“did not start”) as the reason out, ARCA Menards Series PR Director Charlie Krall clarified that Sarah will not be credited with an official series start, and therefore will not be credited with 16th place. Because Sarah made a qualifying attempt before she withdrew, however, she will receive three championship points.
Because Racing-Reference’s ARCA pages sometimes take a few days to fully update, for the purposes of official LASTCAR championship scoring, we will not dispute Krall’s explanation. Therefore, Pedroncelli is now just ahead of Phoenix last-place finisher Eric Rhead at the top of the West Series LASTCAR standings. Following Pedroncelli up the results order was Stafford Smith, who completed 73 laps before retiring with steering issues. A late crash for Chris Lowden left him 13th with 142 laps completed, followed by Bridget Burgess in 12th and Nick Joanides in 11th.
Up front, Sunrise Ford Racing’s Tanner Reif survived an overtime restart to score his first career victory in only his second start. Reif led all 153 laps of the race.
THE BOTTOM FIVE
15) #31-Paul Pedroncelli / 2 laps / brakes
14) #21-Stafford Smith / 73 laps / steering
13) #11-Chris Lowden / 142 laps / crash
12) #88-Bridget Burgess / 148 laps / running
11) #77-Nick Joanides / 149 laps / running
2022 LASTCAR ARCA MENARDS SERIES WEST MANUFACTURERS CHAMPIONSHIP
1st) Chevrolet (2)
2022 LASTCAR ARCA MENARDS SERIES WEST OWNERS CHAMPIONSHIP
1st) Jones Racing, Pedroncelli Racing (1)
2022 LASTCAR ARCA MENARDS SERIES WEST DRIVERS CHAMPIONSHIP 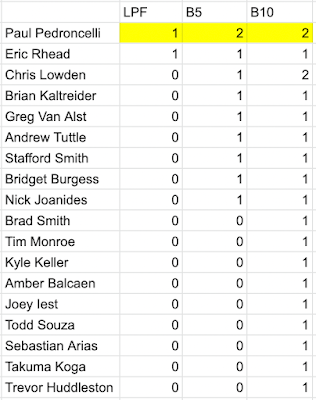