Eric Rhead finished last for the 1st time in his ARCA Menards Series career in Friday’s General Tire 150 at Phoenix Raceway when his #66 Jones Racing Chevrolet did not start the race.

The finish came in Rhead’s first attempt at an ARCA Menards Series race.

Eric Rhead first became hooked on racing at age fourteen, when his father started racing locally. Only a year later, Rhead got his own race car and competed through high school. After taking a short break from racing after graduation, he returned to competition in 2007 at Rocky Mountain Raceway, near his Utah home. He spent a couple years in super stocks and a couple years in super late models, racing regionally throughout the Rockies. He eventually moved to Modified racing, running in the Lucas Oil Modified Tour for a time.
At the end of 2018, Rocky Mountain Raceway closed, and Rhead started making trips to the two next asphalt tracks: the Las Vegas bullring seven hours to the south and Magic Valley Speedway in Twin Falls, Idaho, four hours to the northwest. In 2021, Rhead and his crew decided to chase NASCAR Advance Auto Parts Weekly Series points. The team wound up having a dream season and won the West region, placing sixth nationally among NAAPWS Division I competitors. He appeared set for more of the same this year until Rhead’s name appeared on the ARCA entry list – it was not even announced on the driver’s social media channels until midweek.

As it was a combination race between the ARCA Menards Series and the ARCA Menards Series West, the General Tire 150 featured a stacked entry list. This was partly due to both the national and the West series both having solid bases this year, but a number of special entries also popped up for the race. Xfinity Series regular Josh Berry drove for MMI Motorsports, and Connor Mosack took the wheel of the Bret Holmes Racing entry. Tim Spurgeon made a rare start on a pavement oval, and Andrew Tuttle entered two cars - one for himself and the other for Ryan Roulette. West Virginia native Christian Rose drove the #42 Cook Racing car, and Kyle Keller popped up again on the West circuit, driving the #70 car. In some of the variable driver entries, Chris Lowden was at the helm of the #21 car for longtime team owner John Wood, and Fast Track Racing entered Tim Monroe, Zachary Tinkle, Bryce Haugeberg, and D.L. Wilson in its four cars.

There was only a combined practice/qualifying for all 39 cars, following the withdrawal of the Performance P-1 Motorsports entry of Nick Joanides. Just short of halfway through the session, Rhead lost control of his machine in Turns 3 and 4 and backed it into the SAFER barrier in the middle of Turn 4. With only two hours from the time of the crash to the start of the race, the Jones Racing team was not able to repair Rhead’s entry on time and he did not start the race. Despite this, he was still credited as last on the scoresheet with 0 laps completed. 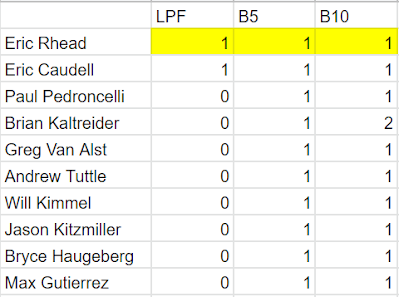