Posted by Brock Beard at 7:04 PM No comments: 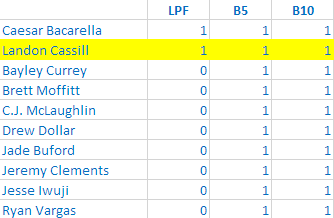 Posted by Brock Beard at 7:39 PM No comments:

by Ben Schneider
LASTCAR.info Guest Contributor
Eric Caudell picked up the sixth last-place finish in his ARCA Menards Series career in Saturday’s Lucas Oil 200 Driven by General Tire at Daytona International Speedway when his #7 Red Tide Canopies / Coble Enterprises Ford crashed out of the event after completing 21 laps.
The finish came in Caudell’s 59th career series start and was his first LPF since Road America in 2017.
While Caudell did not appear in NASCAR or ARCA before 2014, the 55-year-old energy trading software consultant has been racing for decades. He told ARCARacing.com in 2017 that he had developed an interest in racing as early as high school, and he began running asphalt late models in the late 1990s. He then found a home in the United States Super Trucks (USST), becoming a series regular until the series folded due to the effects of the 2008 financial crisis.
Caudell then began searching for opportunities in NASCAR, making one start in the Camping World Truck Series for Cefalia Motorsports in 2014. He would make his ARCA debut a year later, and in 2017 ran the full season with Hixson Motorsports en route to a tenth-place points finish. While the demands of a full-time schedule proved to be grueling, he has continued to remain in ARCA, running a handful of races every year for his CCM Racing team. His career highlight is perhaps an eighth-place finish at Winchester in 2020, a race that saw Caudell, Brad Smith, and Con Nicolopoulos all score their first career top-ten finishes.
Caudell qualified 28th for Saturday’s race at Daytona and had picked up a handful of spots, running just outside the top-twenty before his day came to an end. After his early retirement, series veteran Will Kimmel and Jason Kitzmiller crashed on Lap 50, ending both of their races. The accident capped a tough weekend for Kitzmiller, who was looking to make his NASCAR Camping World Truck Series debut but was forced to withdraw from the event after a practice crash. Eighteen-year-old Bryce Haugeberg persevered through mechanical issues to complete 61 laps, while last year’s ARCA Menards Series East winner at New Smyrna, Max Gutierrez, bested Haugeberg by two laps to round out the Bottom Five
Up front, the race was dominated by Corey Heim, who won the season-opener at Daytona for a second straight season after leading 74 of 80 laps. Heim, who finished runner-up to Ty Gibbs in the 2021 ARCA Menards Series Championship, will split the season in Venturini Motorsports’s No. 20 Toyota with Jesse Love, who won the championship each of the last two seasons in the ARCA Menards Series West.
THE BOTTOM FIVE
36) #7-Eric Caudell / 21 laps / crash
35) #68-Will Kimmel / 50 laps / crash
34) #97-Jason Kitzmiller / 51 laps / crash
33) #94-Bryce Haugeberg / 61 laps / running
32) #32-Max Gutierrez / 63 laps / running
2022 LASTCAR ARCA MENARDS SERIES MANUFACTURERS CHAMPIONSHIP
1st) Ford (1)
2022 LASTCAR ARCA MENARDS SERIES OWNERS CHAMPIONSHIP
1st) CCM Racing (1)
2021 LASTCAR ARCA MENARDS SERIES DRIVERS CHAMPIONSHIP 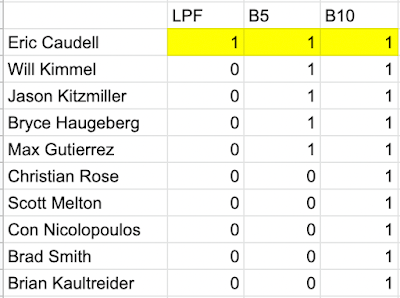 Posted by Brock Beard at 7:44 PM No comments:

by Ben Schneider
LASTCAR.info Guest Contributor
Zachary Tinkle finished last for the 1st time in his ARCA Menards Series East career in last Tuesday’s Race to Stop Suicide 200 at New Smyrna Speedway when his #0 GreatRailing.com Ford did not start the event due to a transmission issue.
The finish came in Tinkle’s second career “East Series” start; his first was a combination race with the main ARCA Menards Series at Bristol last season.
Like many young drivers, Tinkle began his career in go-karts, working his way up the ladder and eventually winning late model races en route to beginning a career in stock cars. Tinkle made his debut for Wayne Peterson Racing in 2021, finishing thirteenth at Berlin Raceway. His best finish last season came at the DuQuoin State Fairgrounds; despite recording a DNF, a high rate of attrition allowed him to score an eighth-place finish.
Tinkle arrived at New Smyrna and immediately faced adversity when the front shaft of his car’s transmission broke. While the team was able to acquire a new transmission, Tinkle announced shortly before the start of the race that he would not be able to get it in time for the race. He was subsequently credited with a sixteenth-place finish. Despite not starting the event, Tinkle’s official “reason out” was listed as “transmission” rather than “did not start.”
Immediately following Tinkle up the final race results was ARCA veteran Brad Smith, who parked with engine trouble after completing 8 laps. Fast Track Racing’s Tony Cosentino was next to pull off the track, suffering brake issues after Lap 21. Caleb Costner, last year’s last-place finisher at the ARCA Menards Series West race at Portland, completed 47 laps before retiring with overheating issues, while series newcomer Steve Austin (not the wrestler) completed the bottom five after completing 122 laps before he also encountered brake problems. The only other retirement was 11th-place finisher Christian Rose, who crashed out after 145 laps.
At the front of the field, defending series champion Sammy Smith picked up right where he left off, leading 167 of 200 laps on the way to his fourth career East Series win. Smith’s No. 18 Toyota is now under the Kyle Busch Motorsports banner as KBM acquired the assets to Joe Gibbs Racing’s ARCA program over the offseason.
THE BOTTOM FIVE
16) #0-Zachary Tinkle / 0 laps / transmission
15) #48-Brad Smith / 8 laps / engine
14) #12-Tony Cosentino / 21 laps / brakes
13) #95-Caleb Costner / 47 laps / overheating
12) #22-Steve Austin / 122 laps / brakes
2022 LASTCAR ARCA MENARDS SERIES EAST MANUFACTURERS CHAMPIONSHIP
1st) Ford (1)
2022 LASTCAR ARCA MENARDS SERIES EAST OWNERS CHAMPIONSHIP
1st) Wayne Peterson Racing (1)
2021 LASTCAR ARCA MENARDS SERIES EAST DRIVERS CHAMPIONSHIP

Posted by Brock Beard at 7:48 PM No comments:

CUP: NY Racing Team gets Greg Biffle back on the road, dropping Ross Chastain to last in Daytona 500 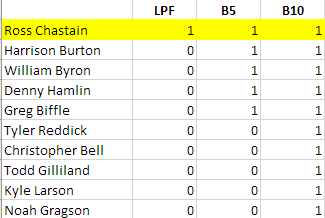 Posted by Brock Beard at 9:31 PM No comments: 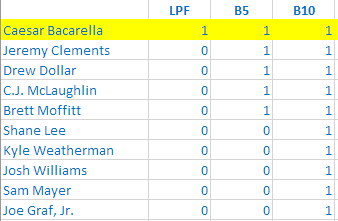 Posted by Brock Beard at 9:55 PM No comments: 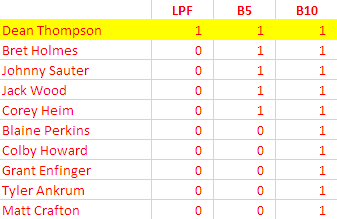