Braison Bennett picked up the second last-place finish of his ARCA Midwest Series career in Tuesday’s Gandrud Auto Group Dixieland 250 at Wisconsin International Raceway when his #9 PMF Landscape Supply / Bennett’s Auto, Inc. Toyota retired from the race after completing 25 of the race’s 250 laps.

The finish was Bennett’s first since the May 29 race at Jefferson, three races prior.

Braison Bennett is the third generation of an illustrious family of Wisconsin racing drivers. His grandfather, Bob Bennett, was a pioneer in the Northeast Wisconsin circle track racing scene in the mid-1900s. Braison’s father Lowell is an incredibly accomplished super late model racer who won the Slinger Nationals five times and made seven Busch Series starts in the early 2000s.
Braison cut his teeth in the local pavement ranks at Wisconsin International, following the tire tracks of his father and grandfather, but also spent some time in the local IMCA dirt scene. However, after some years, Bennett decided to fully turn his attention to pavement racing, running in both the late model and super late model divisions at WIR. Until 2021, all of Bennett’s racing had been done with himself at the helm with his trademark #9 machines. However, at the end of 2020, local team Chase Motorsports parted ways with Casey Johnson, who won the ARCA Midwest Tour title in 2019 and 2020. For local shows, Chase turned to Braison Bennett; the team’s traveling endeavors were mostly put on hold for 2021.

Ty Majeski, the former Roush-Fenway Racing development driver who grew up about a half hour from WIR in Seymour, Wisconsin, paced the qualifying session with a lap of 18.7 seconds. The top 16 qualified in on time trials with WIR local Jesse Oudenhoven the last of those. Bennett clocked in 32nd, and anchoring the charts in 34th was Andrew Brockers, a Midwest Tour regular who ran a lap of 20.2 seconds. Brockers consistently lacked pace in the last chance qualifier, and eventually retired early from the race, the only entry to do so. Travis Sauter, brother of NASCAR Truck Series driver Johnny Sauter, won the last chance race. Bennett finished 15th in a race that took ten cars to the feature, but secured a provisional due to his high point standing within WIR’s weekly racing.

The other local provisional (the Midwest Tour granted two for this event) was granted to Sawyer Effertz, who secured the 30th and last starting spot on the grid. The last-place battle, however, cycled through several different drivers in the early goings. On Lap 6, local driver Bobby Kendall assumed control of the last position, followed by Levon Van Der Geest, Bennett and Dillon Hammond in the next few laps. Hammond qualified in on time and avoided the last chance race, but struggled with handling during the feature event, eventually finishing eight laps down in 16th position. The #75 machine was lapped on Lap 19 and was the last-place runner until Lap 26. At that point, Bennett’s #9B machine made a quiet exit on to the pit lane. As his pit stall was on the backstretch, activity was hidden from the fans, and the car never made it back out on track. When non-crew members were allowed in the infield after the race, Bennett’s hauler was already on its way out of the track, the driver at the helm of the dually.

Next to retire was Jeff Holmgren Jr., who ran decently until the first competition caution on Lap 56, but did not return to the race after pitting. The WIR local was busy putting the car away after signing autographs and taking pictures after the race, but I did manage to catch a word with one of his crew members. “We have three cars and this one just doesn’t run right. Jeff has two checkered flags here in the past month, there’s no reason we should be lapped by lap 50,” the crew member told me. The team parked the entry; photos later showed that flames were emanating from the car for a fair amount of the opening section of the race.

The 2011 ARCA Midwest Tour champion Andrew Morrissey met a similar quiet end to his race. His #19 Toyota made it just past the competition caution before making an inauspicious exit on Lap 59. Things were a little more hectic for Carson Kvapil, the 27th-place finisher. The son of former NASCAR Cup racer Travis Kvapil skipped on the first day of his junior year in high school to run the Dixieland and showed off in time trials, clocking in eighth on the charts. The #35 machine was a solid contender until Lap 65, when the car slowed considerably in turns one and two. Kvapil pitted in an attempt to fix the issue, but made only a few more laps before permanently retiring from the race. “I was just driving it as hard as I could to keep up without burning the right rear off,” Kvapil told me after the race. “We broke the left-front hub, broke the A-frame. We had really good speed, just didn’t get to show it.”

A similar fate befell Love, who rounded out the Bottom Five. The ARCA Menards Series West champion was fastest in final practice and was sixth in time trials while driving for Chris Wimmer Development, headed by the namesake, the former Xfinity Series driver. Approaching Lap 90, Love’s car lost a good amount of pace and fell through the field, eventually spinning Aric Almirola on Lap 93 to draw a caution. The ensuing pit stop stretched into a retirement for the #21 car, which was later revealed to have also broken a hub. “About Lap 60, I felt a really bad vibration, felt like the power steering,” commented the driver. “Got progressively worse and worse and then after that caution got really really bad… I finally found a hole to get down to the pit road, and before I was going to make that cut, it broke the right-front hub. It landed on the splitter and went straight, and you can’t do anything at that point.”

Almirola emerged from the spin unscathed and finished the race in eleventh position on the lead lap. 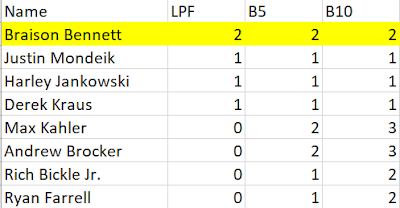