XFINITY: Last-place battle turns into a confrontation after Jeffrey Earnhardt and Joe Graf, Jr. crash out early in Phoenix finale

Earnhardt’s last-place finish locked up the 2021 LASTCAR XFINITY Series Championship for David Starr, the only driver with three last-place runs this season. After briefly holding last place in the early laps, Starr began a determined march up to 21st at the finish, crossing the line on the lead lap. I caught up with Starr after the race.
“The most important part for us would have been to make the race - that was important,” he said. “And so that's really what we worked on yesterday in practice. We made about four or five runs and had the wrong air pressures in the tires. Then Carl put more camber in the right front for two laps to make it cut better in the center of the corner. So qualifying, the car would cut, and you'd get back to the gas quicker. Unfortunately, for the race, when the race started, when you lean that tire in and put more camber in, it wears out the inside of the tire. So as you run, the car gets worse. And usually when you run, you want the car to get better. So we were dealing with cording the right-front really bad. And they went to working on the race car from a handling standpoint. And they just kept working and working him and we just kept digging. You know, 21st is not what we want, but. . .the guys did a great job trying to put what we needed in the car to make it a long run car.”
Starr also commented on the challenges he and his team have faced this year, particularly with mechanical issues.
“That's one of the things I really tell my team to work hard on because mechanical failures - you've got to pay attention to the details. Losing engines and stuff like that. You're not a powerhouse team, you don't have all the money in the world, but you still gotta focus on details and watch everything. I'm okay finishing 16th, 15th, 17th, 19th, 20th - I'm okay with that as long as we've maxed out everything we had. When we finish in last, that hurts my feelings. That's what I don't like. It's just the circumstances. It's not what we work every day for but I'll take it.”
LASTCAR STATISTICS
*This marked Earnhardt’s second last-place finish in a XFINITY race at Phoenix, following a November 8, 2014 race where, while also driving for Johnny Davis, his #4 JD Motorsports Chevrolet lost the engine on the opening lap of the DAV 200 Honoring America’s Veterans.
*This marked the first last-place run for the #0 in a XFINITY Series race since August 27, 2016, when Garrett Smithley crashed after 2 laps of the Road America 180 at Road America. The number had never before finished last in a XFINITY race at Phoenix.
THE BOTTOM FIVE
36) #0-Jeffrey Earnhardt / 57 laps / crash
35) #17-Joe Graf, Jr. / 97 laps / crash
34) #99-Stefan Parsons / 123 laps / engine
33) #48-Jade Buford / 193 laps / crash
32) #92-Josh Williams / 194 laps / crash
2021 LASTCAR XFINITY SERIES OWNER'S CHAMPIONSHIP - FINAL
1st) B.J. McLeod Motorsports (5)
2nd) Mike Harmon Racing (4)
3rd) JD Motorsports, Motorsports Business Management (3)
4th) DGM Racing, Jimmy Means Racing, Joe Gibbs Racing, JR Motorsports, Our Motorsports, RSS Racing / Reaume Brothers Racing (2)
5th) Brandonbilt Motorsports, Martins Motorsports / Alpha Prime Racing, Sam Hunt Racing, Rick Ware Racing / SS-Green Light Racing, SS-Green Light Racing, Stewart-Haas Racing (1)
2021 LASTCAR XFINITY SERIES MANUFACTURER'S CHAMPIONSHIP - FINAL
1st) Chevrolet (24)
2nd) Toyota (8)
3rd) Ford (1)
2021 LASTCAR XFINITY SERIES DRIVER'S CHAMPIONSHIP - FINAL 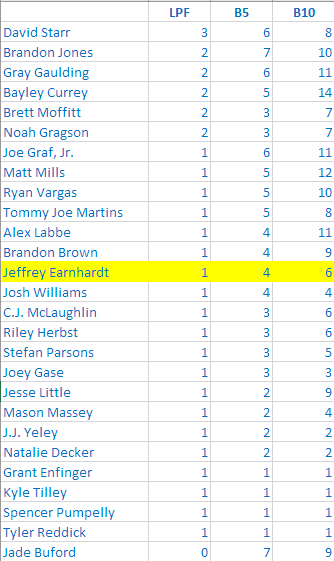