PREVIEW: Seven eligible for ARCA WEST Championship as series wraps up at Phoenix

by Ben Schneider
LASTCAR.info Guest Contributor
The LASTCAR ARCA MENARDS SERIES WEST DRIVERS CHAMPIONSHIP may already be locked up, but competition for the actual series championship is even more wide open than the NASCAR Cup Series Playoffs.
A staggering 36-car entry list for Saturday’s Arizona Lottery 100 at Phoenix Raceway means that seven drivers are still mathematically eligible for the title, from development drivers racing for the powerhouse teams of the series to owner-driver veterans on shoestring budgets.
Just over three weeks ago at All American Speedway in Roseville, Paul Pedroncelli finished last for the fourth time in his ARCA Menards Series West career in the NAPA Auto Care 150 when his #31 Pedroncelli Mobile Bottling Chevrolet suffered vibration issues after two laps. His son, Paul Jr. led on the final lap and took the checkered flag for his first career ARCA Menards Series win. We at LASTCAR.info documented the Pedroncelli family’s story in late September following Las Vegas.
Following his maiden series victory, “P.J.” finds himself only one point behind championship leader Jesse Love. Love is looking to defend his 2020 West Series championship with Bill McAnally Racing, who have won five of the last six West Series titles as a team.
Also in the championship fight are Sunrise Ford Racing’s Jake Drew, Naake-Klauer Motorsports’ Joey Iest, and Love’s BMR teammate Cole Moore. Only six points separate first and fifth in the standings entering Phoenix.
Two other longshots for the title who are still in mathematical contention are Drew’s SFR teammate Trevor Huddleston and Central Coast Racing’s Todd Souza. With a 26-point deficit, it would take a perfect storm of events for Souza to win the championship, while Huddleston will still need some significant help to make up a 15-point deficit of his own.
Other names on the entry list include Joe Gibbs Racing teammates Ty Gibbs and Sammy Smith, this year's champions of the ARCA Menards Series and ARCA Menards Series East respectively. Gracie Trotter, who in 2020 became the second woman to win a West Series race, returns to the series in an entry for Venturini Motorsports alongside teammates Drew Dollar, Parker Chase, and Toni Breidinger, who finished last in the 2021 season-opener at Las Vegas. Rev Racing will also enter two cars for Nick Sanchez and Rajah Caruth, who have both recently announced plans to race part-time in the Xfinity Series in 2022.
2021 LASTCAR ARCA MENARDS SERIES WEST MANUFACTURERS CHAMPIONSHIP
1st) Chevrolet (7)
2nd) Toyota (1)
3rd) Ford (0)
2021 LASTCAR ARCA MENARDS SERIES WEST OWNERS CHAMPIONSHIP
1st) Pedroncelli Racing (4)
2nd) Young’s Motorsports, Rodd Racing, Kart Idaho Racing, Performance P-1 Motorsports (1)
2021 LASTCAR ARCA MENARDS SERIES WEST DRIVERS CHAMPIONSHIP 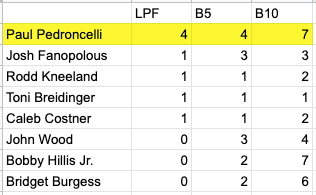