INTERVIEW: Chris Hacker among new drivers with unique stories in the Truck Series 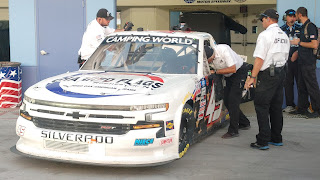