by Ben Schneider
LASTCAR.info Guest Contributor
Paul Pedroncelli finished last for the 5th time in his ARCA Menards Series West career in Saturday’s Arizona Lottery 100 at Phoenix Raceway when his #31 Pedroncelli Mobile Bottling Chevrolet suffered brake issues after two laps.
The finish was Pedroncelli’s third in a row and fifth in the last six races.
While his son P.J. emerged as a surprise contender for the ARCA West championship this season, Paul ran a second entry for the Pedroncelli family’s operation at every race this season except the season-opener at Phoenix. Paul primarily appeared in a “start-and-park” role, only running the full distance at Irwindale and the road courses at Sonoma and Portland. He clinched the LASTCAR ARCA Menards Series West Driver's Championship a race earlier at Roseville and ended the season as the only driver with more than one last-place finish.
Prior to the start of Saturday's race, 32nd-place starter Ryan Roulette stalled his #77 Jan's / Bellator Recruiting / Proper Patriot Toyota and was pushed by a tow truck down pit road. Roulette's car fired, stalled again, then fired once more, and along with last-place starter Travis Milburn in the #08 Kart Idaho Toyota caught up to the tail end of the field just before the green.
On Lap 1, Pedroncelli's #31 dropped back to 33rd behind Roulette with Milburn catching him. On Lap 2, he was joined by P.J., who had lost spots after a spin. Pedroncelli, who wore a plain gray driver's uniform on race day, pulled behind the wall on Lap 3 using the first garage entrance off Turn 2 shared with the Truck Series. He parked his car behind a passenger car at the ARCA garage entrance, then quickly headed toward pit road through the XFINITY Series garage. When asked what put him behind the wall, he indicated a vibration, and made a gesture of his hands on a shaking steering wheel.
Following Pedroncelli up the order were Travis Milburn, whose Toyota dropped out with transmission issues after 43 laps. Eric Nascimento retired with crash damage after completing 65 laps, and 2021 LASTCAR ARCA West Championship runner-up Josh Fanopolous pulled out for the same reason after 77 laps. The final car running at the finish was Portland last-place finisher Caleb Costner, who completed 86 laps to round out the Bottom Five.
Going into Phoenix, seven drivers were mathematically eligible for the championship. Jesse Love led the standings ahead of P.J. Pedroncelli, Jake Drew, Joey Iest, and Cole Moore, with those five drivers separated by a mere six points. Trevor Huddleston and Todd Souza were each more of a longshot for the title, with fifteen and twenty-six point deficits to Love respectively.
Several strong part-time and one-off entries stole the top positions from the championship contenders. Ty Gibbs returned to the West Series after winning the season-opener, bookending the season with Phoenix victories as he led every lap. The highest-finishing championship contender was Moore in tenth, followed by Drew in eleventh.
As Drew crossed the start-finish line, it appeared that he would win the championship by one point, as Love had begun the final lap of the race in fifteenth place. Drew entered the race three points behind Love, and, with a four-point swing, appeared set to take the title away from Love. However, on the final lap, Drew’s teammate Huddleston appeared to lift off the throttle, allowing Love a path around him for fourteenth. With the points tied, Love’s two race wins gave him the tiebreaker over Drew’s zero, allowing the Bill McAnally Racing driver to defend his 2020 championship.
The last-minute swing in deciding the title reminded some fans of the 2008 Formula 1 Brazilian Grand Prix, in which Lewis Hamilton won the championship by a single point after passing Timo Glock for fifth place on the last lap, stealing the title from race winner Felipe Massa.
For BMR, the championship was the team’s eleventh in West Series history, as well as their third in a row and sixth in the last seven seasons. While his 2022 plans are not yet set in stone, Love intends on running as many ARCA races as possible with Toyota.
THE BOTTOM FIVE
34) #31-Paul Pedroncelli / 2 laps / brakes
33) #78-Travis Milburn / 43 laps / transmission
32) #4-Eric Nascimento / 65 laps / crash
31) #21-Josh Fanopolous / 77 laps / crash
30) #08-Caleb Costner / 86 laps / running
2021 LASTCAR ARCA MENARDS SERIES WEST MANUFACTURERS CHAMPIONSHIP - FINAL
1st) Chevrolet (8)
2nd) Toyota (1)
3rd) Ford (0)
2021 LASTCAR ARCA MENARDS SERIES WEST OWNERS CHAMPIONSHIP - FINAL
1st) Pedroncelli Racing (5)
2nd) Young’s Motorsports, Rodd Racing, Kart Idaho Racing, Performance P-1 Motorsports (1)
2021 LASTCAR ARCA MENARDS SERIES WEST DRIVERS CHAMPIONSHIP - FINAL 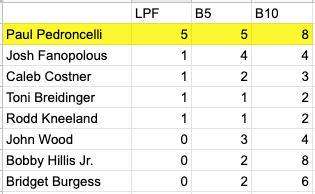