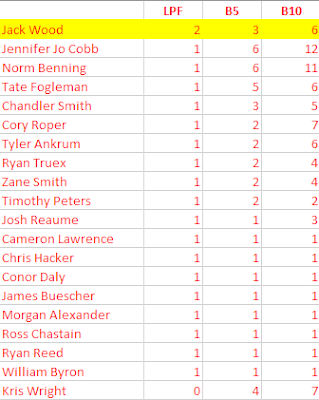 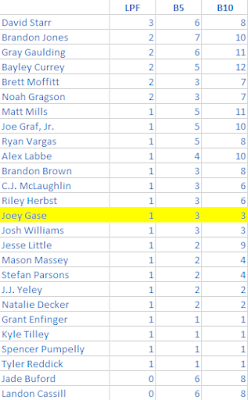 With two races to go, David Starr remains the only driver with three last-place finishes in this year’s XFINITY Series season, and picked up his sixth Bottom Five and eighth Bottom Ten last week in Kansas. Still, the only way he can lock-up the 2021 title at Martinsville is by finishing last.
Brandon Jones and Gray Gaulding** both have more Bottom Fives than Starr and can take the lead simply by finishing last at Martinsville.
Bayley Currey can also take the lead from Starr with a last-place run at Martinsville as he has more Bottom Tens than any of the top three.
If Jones, Gaulding, and Currey do not finish last at Martinsville - and neither does Starr - all three may still have a chance at beating Starr in Phoenix, depending on where Starr finishes.
Brett Moffitt, Noah Gragson, Matt Mills, Joe Graf, Jr., Ryan Vargas, and Alex Labbe can only claim the title by sweeping both Martinsville and Phoenix, and may need extra help with Starr not picking up any more Bottom Fives or Bottom Tens. All six will be eliminated if they do not finish last on Saturday.
All other drivers ranked from C.J. McLaughlin and lower have been mathematically eliminated.
**ENTRY LIST UPDATE: Gray Gaulding is not entered in Saturday's race, but so long as David Starr, Brandon Jones, or Bayley Currey do not finish last, he could still take the title with a last-place run in Phoenix. All other drivers still in mathematical contention are all entered and will start the race.
CUP SERIES 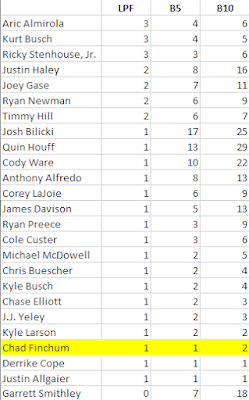 The closest LASTCAR championship battle remains in the Cup Series, where Aric Almirola leads by a single Bottom Ten finish over Kurt Busch and by a single Bottom Five over Ricky Stenhouse, Jr. Almirola, Busch, and Stenhouse are the only three drivers with three last-place finishes this season. (UPDATE: Oct. 27): Any one of these three may be able to lock-up the championship by finishing last at Martinsville, but that depends on where the other two finish.
Directly behind them are four drivers with two last-place finishes – Justin Haley, Joey Gase, Ryan Newman, and Timmy Hill. All four of these drivers have more Bottom Fives and Bottom Tens than any of the lead trio, meaning any of them can take the lead in the standings simply by finishing last at Martinsville (or at Phoenix, if none of the Top 3 finish badly at Martinsville).
Josh Bilicki, Quin Houff, Cody Ware, Anthony Alfredo, Corey LaJoie, and James Davison*** each have one finish, and will be eliminated from LASTCAR championship contention if they do not finish last at Martinsville. These six drivers all have the same number or more Bottom Fives and Bottom Tens than anyone ahead of them, but can only compete if any one of them finishes last at both Martinsville and Phoenix.
Ryan Preece, Cole Custer, Michael McDowell, Chris Buescher, and Kyle Busch also have an outside chance at winning the title by sweeping both Martinsville and Phoenix, depending on where the drivers ahead of them finish.
All drivers ranked from Chase Elliott and lower have been mathematically eliminated.
***ENTRY LIST UPDATE: Among those drivers still in mathematical contention, only James Davison is not entered. With only one last-place finish, he is eliminated from title contention.
Posted by Brock Beard at 3:50 PM