Joey Gase picked up the 10th last-place finish of his NASCAR Cup Series career in Sunday’s XFINITY 500 at the Martinsville Speedway when his #53 Adkins Chevrolet fell out with electrical issues after 10 of 501 laps.
The finish, which came in Gase’s 89th series start, was his third of the season and first since Texas, two races ago. In the Cup Series last-place rankings, it was the 23rd for the #53, the 42nd from electrical problems, and the 817th for Chevrolet. Across NASCAR’s top three series, it was the 28th for the #53, the 135th from electrical problems, and the 1,816th for Chevrolet.
With the finish, Gase has taken the lead in the 2021 LASTCAR Cup Series Championship heading into next Sunday’s finale at Phoenix. In that race, Aric Almirola, Kurt Busch, Ricky Stenhouse, Jr., and Justin Haley are the only drivers who could beat him for the title, and each would need to finish last at Phoenix.
The Martinsville triple-header weekend would see Gase only compete in the Cup race, where he again drove the #53 with Rick Ware Racing. Following a 32nd-place finish in Kansas, he’d roll off 34th on the short track with returning sponsorship from Adkins Automotive, which backed him in the Pocono double-header last year, plus Donate Life Virginia.
Taking the 38th and final starting spot was Timmy Hill, who a day earlier finished a strong 10th in his unsponsored #56 Chevrolet during the Truck Series race at the same track. Hill’s ride would be the #66 American Dream Leasing Toyota of Carl Long’s team, Motorsports Business Management. Joining him in the back would be 3rd-place starter Denny Hamlin for two inspection failures on his #11 FedEx Ground Toyota – one each for body issues and rear alignment.
When the race started, Hamlin took the green in 36th ahead of both Hill and new last-place runner Garrett Smithley in Rick Ware Racing’s #15 Boom Mobile Chevrolet. Smithley remained in last at the end of Lap 1, 6.332 seconds back, and the team reported the then-32nd-place Gase had smoke coming off one of his fenders. Around this time, as Hamlin charged through the field, he bumped Gase off Turn 2, and the #53 dropped to last on Lap 4, 9.375 seconds back of the lead and three-tenths back of Smithley. Gase lost even more ground by Lap 6, when he was 3.251 seconds back of new 37th-place runner Quin Houff in the #00 Sim Seats Chevrolet. He came down pit road, and was the first to be lapped on the 8th circuit.
Gase ended up staying on pit road for some time, at first reporting a wheel hop, then heading to the garage with a fuel pressure issue on Lap 17. Gase reported his car kept shutting off, and the team had the driver test the ignition. On Lap 25, Gase said “It has fuel pressure now, it's just when I go through the corner, I lose it.” According to the team, they had previously had a similar issue on the car of teammate Cody Ware in the #51 Nurtec ODT Chevrolet.
Since Gase’s team didn’t have a replacement fuel pump, they attempted a repair and sent Gase back on track on Lap 41, 35 laps down to the leaders. But just three laps later, Gase said he had the same issue, and the team said the engine still sounded rough. “They’re probably gonna park us,” said someone on the team as they sent him behind the wall again on Lap 45. Gase’s crew confirmed it was a fuel pump issue, and looked to replace the entire fuel cell. According to radio traffic from the team, the cell in the #53 had been used at Richmond, Bristol, and Las Vegas without serious incident. By Lap 90, the team called for fuel to prepare for another run. Gase re-fired the engine on Lap 98, and reported his fuel pressure was back. With that, he returned to the track on Lap 106, 96 laps down, and was instructed to drive onto pit road if the car started to sputter. Hardly had the message been relayed when Gase reported “Fucking done, same shit.” He pulled into the garage for the final time on Lap 109, and this time the crew took off the wheels in preparation to load the car on the hauler. NASCAR confirmed Gase out with electrical issues on Lap 116.
As Gase tweeted later that night, the short race had a silver lining as he was able to go “trick-or-treating” with his two children.
Timmy Hill finished 37th with engine trouble after 206 laps, but that was no indication of the run he had to that point. Despite the fast pace early on, Hill was still the last driver on the lead lap on Lap 83, when he was running 26th, and worked his way to 24th after he was lapped. Ryan Preece spent nearly 60 laps behind the wall after something broke on his car, then returned to complete nearly the rest of the event before the brakes failed in the left-front of his #37 Thomas’ / Kroger Chevrolet with just 27 laps to go.
All other starters finished under power, including 35th-place #52 Insurance King Ford of Josh Bilicki and 34th-place Quin Houff in the #00 Sim Seats Chevrolet, each 18 laps down. The two tangled on Lap 324, and Houff was held five laps by NASCAR for spinning Bilicki back under caution, where a safety truck was not far behind off Turn 2.
LASTCAR STATISTICS
*This marked the first last-place finish for both Gase and the #53 in a Cup race at Martinsville.
THE BOTTOM FIVE
38) #53-Joey Gase / 10 laps / electrical
37) #66-Timmy Hill / 206 laps / engine
36) #37-Ryan Preece / 414 laps / brakes
35) #52-Josh Bilicki / 483 laps / running
34) #00-Quin Houff / 483 laps / running
2021 LASTCAR CUP SERIES OWNER'S CHAMPIONSHIP
1st) Rick Ware Racing (7)
2nd) JTG-Daugherty Racing, Motorsports Business Management, Spire Motorsports, Stewart-Haas Racing (4)
3rd) Chip Ganassi Racing, Roush-Fenway Racing (3)
4th) Front Row Motorsports (2)
5th) Hendrick Motorsports, Joe Gibbs Racing, StarCom Racing (1)
2021 LASTCAR CUP SERIES MANUFACTURER'S CHAMPIONSHIP
1st) Chevrolet (19)
2nd) Ford (11)
3rd) Toyota (5)
2021 LASTCAR CUP SERIES DRIVER'S CHAMPIONSHIP 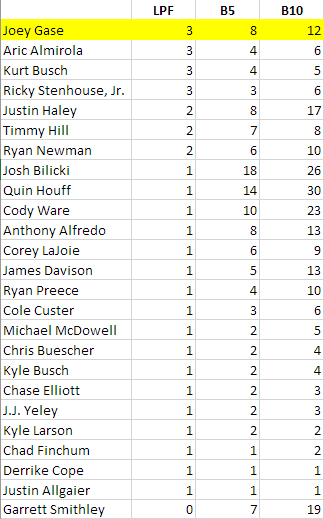 I was a little surprised with the payback from Houff. I would have thought that the way his season's gone that he'd have had more empathy for someone else's troubles. The penalty was actually no penalty. He was 10 laps down at that point with a realistic chance of only picking up one more spot on track. He picked it up anyway.