Ryan Newman picked up the 13th last-place finish of his NASCAR Cup Series career in Sunday’s Bank of America ROVAL 400 at the Charlotte Motor Speedway “Roval” when his #6 Castrol Ford fell out with crash damage after 19 of 109 laps.
The finish, which came in Newman’s 721st series start, was his second of the season and first since Bristol, three races ago. In the Cup Series’ last-place rankings, it was the 35th for the #6, the 622nd from a crash, and the 714th for Ford. Across NASCAR’s top three series, it was the 68th for the #6, the 982nd for Ford, and the 1,276th from a crash.
Since he was last featured here, Newman earned a pair of mid-pack runs at Las Vegas and Talladega, finishing 20th and 21st respectively and moving to 26th in the point standings. He’d carry sponsorship from Castrol for the first time since the spring Talladega race. With the fall Charlotte race recognizing Breast Cancer Awareness Month, both Newman and teammate Chris Buescher would carry pink car numbers and, along with the rest of the field, new pink window nets to be auctioned off for charity. Newman would line up 24th.
Rolling off 39th and last was Timmy Hill, who made his return to Motorsports Business Management’s #66 Coble Enterprises / CrashClaimsR.us Toyota for the first time since the Indianapolis infield course. He’d be joined at the back by Garrett Smithley, whose #53 Kendall Motor Oil Chevrolet failed inspection multiple times. During the pace laps, Smithley slotted in behind Justin Haley in the #77 Bon Secours / Swamp Rabbits Chevrolet. But when the race started, Hill was last based on intervals, 4.781 seconds back of the lead to Smithley’s 4.339.
At the end of the first lap, Hill remained last, 14.995 seconds back of the lead with 39th now occupied by road racer Joey Hand, making his Cup debut in a Stewart-Haas Racing #52 Boom Mobile Ford fielded by Rick Ware Racing. The gap between Hill and Hand remained around 1.2 seconds for the next few laps until the first incident on Lap 5. Heading into the backstretch chicane, 20th-place Aric Almirola’s #10 Ford Warriors In Pink Ford spun from contact from Chris Buescher’s #17 Fastenal Ford. Almirola took last on Lap 6 as the team looked for damage. Almirola then caught and passed Hill by Lap 7.
On Lap 9, Hill dropped Smithley to last for the first time. By then, Smithley’s spotter was trying to plot out a different line around the track, but the driver indicated he couldn’t use it. With a competition caution scheduled for Lap 10, several drivers made green-flag stops short of the yellow. This put Daniel Suarez in 39th on Lap 10, his #99 CommScope Chevrolet then passing Almirola the next time by. When the caution fell, Almirola was left with last place again, now 3.078 seconds back of Smithley. Smithley retook the spot moments later as Almirola incurred a tail-end penalty for his gas man coming over the wall too soon. Scoring also showed Anthony Alfredo last in the #38 Citgard Ford, which soon after showed damage to the nose.
Hill retook last on Lap 13 with Haley assuming it the next time by. On the 15th circuit, Brad Keselowski spun out in the backstretch chicane in his #2 Wurth Ford and appeared to drop behind Haley. But scoring still showed Keselowski in 38th with Haley 39th, the two separated by just over eight seconds. Keselowski caught and passed Hill for 37th on Lap 19, at which point Haley was now running Top Five lap times. He now closed within 4.504 seconds of 38th place, which was now held by Hill, and was looking to cut the deficit further when the caution fell for Ryan Newman.
Coming off Turn 14 – the fourth corner of the oval – Newman’s right-rear tire came apart, sending him into a 360-degree spin. He then bounced off the outside wall with the passenger side of his car, and limped around the track for another lap with the right-rear tire virtually gone. He took over last on Lap 21, when the crew reported “It’s broke in the rear end housing, and it’s down on the ground.” The team attempted to clear the six-minute “Crash Clock,” but pulled behind the wall on Lap 22, out of the race under the Damaged Vehicle Policy. NASCAR confirmed Newman was the first car out on Lap 30. Chris Buescher, Newman's teammate, went on to finish an impressive 3rd.
Smithley pulled behind the wall with a mechanical issue that took more than 10 laps to repair. After dropping to 38th, he clawed his way back to 34th at the finish, climbing out of the Bottom Five in the process. The first he caught was A.J. Allmendinger, whose #16 Jackpot Party Chevrolet led five laps and was still among the leaders when the engine sputtered coming off the backstretch chicane. Justin Haley finished 37th when the engine of the #77 Bon Secours / Swamp Rabbits Chevrolet went flat on the banking. Cody Ware suffered crash damage on the #51 Nurtec ODT Chevrolet, finishing 36th.
Rounding out the group was Corey LaJoie, whose #7 Schluter Systems Chevrolet swung wide in Turn 2 and slammed the wall hard with the passenger side. Following LaJoie into the wall was Joey Hand, who was running 22nd when he hit the barrier. While LaJoie was knocked out in the incident, Hand recovered to finish 27th.
LASTCAR STATISTICS
*This marked the first last-place finish for the #6 in a Cup Series road course race.
THE BOTTOM FIVE
39) #6-Ryan Newman / 19 laps / crash
38) #16-A.J. Allmendinger / 57 laps / engine / led 5 laps
37) #77-Justin Haley / 66 laps / engine
36) #51-Cody Ware / 90 laps / crash
35) #7-Corey LaJoie / 93 laps / crash
2021 LASTCAR CUP SERIES OWNER'S CHAMPIONSHIP
1st) Rick Ware Racing (5)
2nd) JTG-Daugherty Racing, Spire Motorsports, Stewart-Haas Racing (4)
3rd) Chip Ganassi Racing, Motorsports Business Management, Roush-Fenway Racing (3)
4th) Front Row Motorsports (2)
5th) Hendrick Motorsports, Joe Gibbs Racing, StarCom Racing (1)
2021 LASTCAR CUP SERIES MANUFACTURER'S CHAMPIONSHIP
1st) Chevrolet (17)
2nd) Ford (11)
3rd) Toyota (4)
2021 LASTCAR CUP SERIES DRIVER'S CHAMPIONSHIP 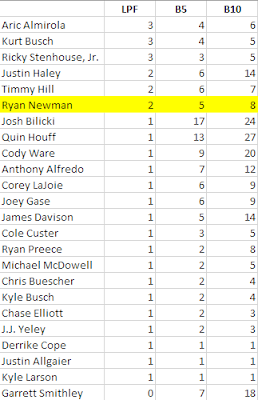