Zachary Tinkle finished last for the first time in his ARCA Menards Series career in Saturday night’s Sioux Chief PowerPEX 200 at Salem Speedway when his #27 Indiana Owned Toyota was involved in an accident after completing 39 of the event’s 200 laps.

Zachary Tinkle has had quite the upbringing in the motorsports world. Born in Cincinnati, he moved to Park Ridge, Illinois during his childhood. He launched his racing career in the area, starting in the Minicup division. He also cultivated a presence on YouTube, jumping into the diecast review arena at a time when SpinMaster was still producing NASCAR diecasts. The following year, he jumped up to the Central States Region Super Cup Series, and stayed in that series until 2015. During that time, he teamed-up with illustrator Nunoh Diaz and together the two created the picture book Zachary Tinkle’s MiniCup Decision, a title published through Left Paw Press, a longtime sponsor. He dipped his toe into late model racing as a test driver in 2017 and then ran the CRA circuit in 2018, earning Rookie of the Year honors in the Late Model Sportsman division. Sometime in the mid-to-late-2010s, he moved to Speedway, Indiana, and accordingly, a lot of his racing efforts shifted to Anderson Speedway.

In 2021, Tinkle and his family team had plans to contest the full CRA JEGS All-Star Tour schedule. However, those plans were derailed when Tinkle’s father sustained a stroke. His father Brad, a molecular geneticist in the Indianapolis area, was the main source of funding for Tinkle’s racing. A GoFundMe page was soon set up to help Tinkle complete the schedule, and while that did not come to fruition, it did lead to a one-off driving for Wayne Peterson Racing at Berlin. That one race turned into four, including an eleventh-place drive at Winchester. After Tim Richmond’s unfortunate injury at Michigan, Richmond Clubb Racing tapped him for relief duty at DuQuoin, then at Bristol, and now at Salem. It is currently unknown who will be in the #27 car to close out the season at Kansas.

A staple of the ARCA schedule for many decades, Salem was left off the schedule last year in the pandemic reshuffling, but returned to the calendar this year. It attracted 18 total entries as the unofficial “throwback” weekend for the ARCA Menards Series. Included in the throwbacks was USAC ace Kody Swanson, making his second career ARCA start and first for GMS Racing. His #21 entry was a tribute to Ricky Craven’s Tide Ride, with GMS Fab on the hood and Cunningham on the rear quarter panels in honor of the late Briggs Cunningham III. Hometown racer Will Kimmel also got into the throwback spirit, honoring Charlie Glotzbach with his #69 entry and winning Best in Show as voted on by the fans. Fast Track Racing also brought two throwback entries to the track: Mason Mingus ran a Harry Gant Bandit throwback in his #11 car, and Ed Pompa ran a Frank Kimmel throwback, complete with sponsorship from Menards. Pompa is quickly making himself a staple of ARCA throwback weekend, with another strong showing following a Darrell Waltip chrome throwback in 2019.
Among non-throwback entries, Jesse Love and Gracie Trotter filled out the Venturini Motorsports stable, and Landen Lewis returned to ARCA, this time in Rette Jones Racing’s signature #30 car. Willie Mullins and Ken Schrader rounded out Fast Track Racing’s lineup, and A.J. Moyer returned to Wayne Peterson Racing. The lone series debut in the field was Canadian driver J.P. Bergeron. The executives at David Gilliland Racing were impressed by his efforts at New Smyrna Speedweeks this year and signed him to a part-time drive in the team’s #46 entry, filling out the races that Thad Moffitt did not have funding to drive.

Moyer trailed the lone practice session, the only car that failed to break the 20-second barrier. Brad Smith was not far ahead of him, running in the 19.9-second timeframe. Tinkle was the only other car in the 19-second bracket, running a best lap of 19.5 seconds. Qualifying was much the same story, at least at the tail end of the field. Moyer and Smith filled out Row 9 in 18th and 17th, respectively, putting up laps on par with their practice times. Tinkle cut almost two seconds off his time to jump into the 17-second range, outqualifying Ed Pompa for 15th place.

No cars incurred tail-end penalties or chose to go to the back, so it was Moyer’s black #06 car that trailed the field to green. However, Brad Smith was slow coming up through the gears on the initial green and was last at the line, although he kept the gap relatively close to Moyer. He and Moyer stayed on the same straightaway, going a lap down on Lap 9 and a second on Lap 16. By the time Lap 35 rolled around, both cars were five laps down, and Smith had retained the 18th and final position for the duration of the race.

On Lap 43, Tinkle was running down the backstretch when, according to him, he was hooked head-on into the turn three wall. The MAVTV crew completely missed Tinkle’s accident, as the cameras first cut to him when he was sliding down the turn three banking with Ed Pompa on his rear bumper, the front end of the #27 car destroyed. Nick Sanchez saw the caution late, tagged the left-rear quarter panel of Taylor Gray’s car, and then slammed headfirst into the driver’s door of Tinkle’s spinning car. Tinkle was done immediately, and while Sanchez’s team tried to repair the damage, the wreck wound up being terminal for the #2 car as well.

Brad Smith was the only other retiree of the race, falling out with electrical issues after 141 laps. Moyer finished the race 24 laps in arrears, and Pompa was eight laps down at the checkered flag to round out the Bottom Five. 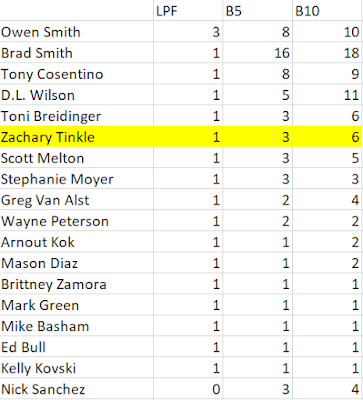