Gray Gaulding picked up the 2nd last-place finish of his NASCAR XFINITY Series career in Saturday’s Sport Clips Haircuts / VFW Help a Hero 200 at the Darlington Raceway when his #52 Panini America Chevrolet fell out with electrical issues after 2 of 152 laps.
The finish, which came in Gaulding’s 63rd series start, was his first of the season and first in a XFINITY race since November 11, 2017 at Phoenix, 124 races ago. In the XFINITY Series last-place rankings, it was the 23rd for the #52, the 56th from electrical problems, and the 577th for Chevrolet. Across NASCAR’s top three series, it was the 61st for the #52, the 133rd from electrical trouble, and the 1,801st for Chevrolet.
Over the last few years, Gaulding has experienced both the highs and lows of competing as an underdog in the XFINITY Series. In 2019, he landed a ride with Bobby Dotter’s team SS-Green Light Racing, and enjoyed a career season, finishing 13th in points with a career-best runner-up finish at Talladega. He made the most of a partial schedule the following year, running 8th in his return to Talladega and then another 2nd-place showing under the lights at Daytona. He also made another nine Cup starts for Rick Ware Racing, finishing a best of 26th on the Charlotte “Roval.”
But this year, Gaulding hasn’t made any Cup starts, and is trying to make ends meet with a struggling Jimmy Means Racing team. Panini America, which started backing Gaulding in 2019, has continued to support his efforts, but in 2021 has finished no better than 17th, and failed to qualify four times. Coming into Darlington, two of his four DNFs came on the superspeedways where he’d excelled in years past, each time yielding only a 34th-place run. He’s also been sharing his ride with other drivers, and last took the green at Michigan in August.
Darlington loomed as another challenge for both driver and team. When the series last ran there in May, Gaulding’s car wouldn’t fire at the command, and his #52 was being pushed back to his pit stall when the green flag dropped. The reason was an electrical issue, and it wasn’t until Lap 15 that he re-fired the engine. He finally completed his first lap 17 circuits into the race and climbed to 38th before a crash knocked him out of the event.
Gaulding drew the 40th and final starting spot under metric qualifying, and incurred a redundant tail-end penalty for missing driver introductions. Joining him in the back was Ty Dillon, who just hours before the race was called in as a relief driver following a medical emergency for Brett Moffitt. Dillon was instructed to drop to the back from 10th in Our Motorsports’ #02 Fr8Auctions Chevrolet, followed by Gaulding. This put Gaulding to Dillon’s outside as the field addressed the starter for the green flag.
As the field completed the final pace lap, Gaulding came over the radio saying “I’ve got an issue, man. . .my gauges are going nuts. I don’t know what the hell is going on.” Once the race started, Dillon pulled away from Gaulding, who repeated that something was wrong with his car. After completing the first lap, Gaulding came to pit road, then coasted to the garage area. “Dammit, we can’t catch a damn break,” said Gaulding, who reported again that “This thing is jacked up.” NASCAR reported he’d gone to the garage on Lap 3, and was declared out soon after on Lap 8.
Finishing 39th was Sam Mayer, who bounced off the Turn 2 wall at the same moment Gaulding pulled into the garage area. Mayer continued under green until an early pit stop, where his car caught fire. Mayer escaped without serious injury, but his car was done for the day. Taking 38th was Riley Herbst, whose #98 Monster Energy Ford rear-ended the slowing Tommy Joe Martins, whose #44 Capital City Hauling Chevrolet lost an engine entering Turn 3. Behind 37th-place Martins was Timmy Hill, who stayed out on old tires to lead the outside line with 32 laps to go. Unfortunately, Hill’s car came out of gear, and his #66 James Carter Attorney / Coble Enterprises Ford plummeted through the field. Hill pulled into the garage soon after.
Jeremy Clements followed-up his 6th-place run in the spring with an 8th-place finish on Saturday in his #51 R.E. Goodson Construction / Fox Sports 98.3 Chevrolet. Two spots behind him in 10th came Alex Labbe in the #36 Globocam / Workpro Tools Chevrolet, matching his track-best finish from the same May race.
LASTCAR STATISTICS
*This marked the first last-place finish for the #52 in a XFINITY Series race at Darlington since November 13, 2004, when Brad Teague’s #52 Means Racing Ford was collected in a five-car pileup after 1 lap of the Bi-Lo 200. Only Teague and 42nd-place finisher Aaron Fike fell out of the race as Teague struck the left-front corner of Fike’s car on the apron.
*Gaulding is the first driver to finish last in a XFINITY race at Darlington due to electrical issues since March 17, 2003, when Justin Ashburn also fell out after 2 laps of the Darlingtonraceway.com 200 in his #61 31-W Insulation Chevrolet.
THE BOTTOM FIVE
40) #52-Gray Gaulding / 2 laps / electrical
39) #8-Sam Mayer / 45 laps / brakes
38) #98-Riley Herbst / 107 laps / crash
37) #44-Tommy Joe Martins / 108 laps / engine
36) #66-Timmy Hill / 116 laps / crash / led 3 laps
2021 LASTCAR XFINITY SERIES OWNER'S CHAMPIONSHIP
1st) B.J. McLeod Motorsports (5)
2nd) DGM Racing, JD Motorsports, Joe Gibbs Racing, JR Motorsports, Mike Harmon Racing, Motorsports Business Management, RSS Racing / Reaume Brothers Racing (2)
3rd) Brandonbilt Motorsports, Jimmy Means Racing, Our Motorsports, Sam Hunt Racing, Stewart-Haas Racing (1)
2021 LASTCAR XFINITY SERIES MANUFACTURER'S CHAMPIONSHIP
1st) Chevrolet (16)
2nd) Toyota (7)
3rd) Ford (1)
2021 LASTCAR XFINITY SERIES DRIVER'S CHAMPIONSHIP 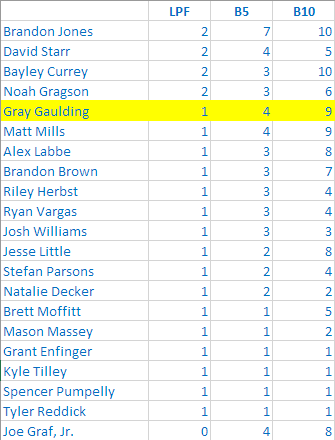