Josh Reaume picked up the 4th last-place finish of his NASCAR Camping World Truck Series career in Thursday’s UNOH 200 Presented by Ohio Logistics at the Bristol Motor Speedway when his #34 DOF Simulator Motion Simulator Toyota was collected in a multi-truck accident after 3 of 200 laps.
The finish, which came in Reaume’s 57th series start, was his first of the season and first since the 2020 finale at Phoenix, 18 races ago. Curiously, this also makes Reaume the 18th different last-place finisher of the 2021 Truck Series season in as many races with just four rounds to go.
In the Truck Series’ last-place rankings, it was the 6th for the #34, the 41st for Toyota, and the 170th from a crash. Across NASCAR’s top three series, it was the 51st for the #34, the 363rd for Toyota, and the 1,272nd from a crash.
On March 31st of this year, Reaume was reinstated by NASCAR following a suspension stemming from a social media post. He returned to action as a driver at Richmond in April, taking 33rd in his #34 truck. While Reaume Brothers Racing has attempted a few XFINITY Series races this year in collaboration with first RSS Racing, then Our Motorsports, before fielding a car of their own at Indianapolis, the team’s focus has remained with their Truck Series team and an ever-changing lineup of drivers. Among these drivers were Keith McGee, NASCAR’s first driver from Alaska, and Armani Williams, the sport’s first driver diagnosed with Autism.
At Bristol, Reaume would again run the #34 with this time C.J. McLaughlin in the #33. There were some issues with the radios before the start as the team was unclear who was on which channel. It was soon discovered the radios had been switched, so each team had to use the other’s channel. Reaume rolled off 28th with McLaughlin back in 38th. McLaughlin would ultimately finish in 26th.
Rolling off 40th and last on Thursday was Ray Ciccarelli, who drove his own #49 Belimo Ford for the first time since Pocono. During the pace laps, NASCAR expressed concern over smoke coming from 22nd-place starter Danny Bohn in the #30 Rustoleum Toyota, concerns that delayed the initial start. When the race started, Ciccarelli remained in last place after 2 laps, 10.04 seconds back of the lead, and already 2.163 back of new 39th-place runner Jennifer Jo Cobb in the #10 Fastener Supply Company Ford.
By Lap 4, Reaume had slipped to 31st place when trouble broke out off Turn 2. Sam Mayer had rolled off 39th in his #32 Camping World Chevrolet, and while picking up several spots spun into the outside wall, damaging the right-front and right-rear of his truck. Howie DiSavino III was also involved, his #3 Kees Vacations / Bud’s Chevrolet sitting backwards on the apron. FS1’s cameras then showed the nose of a Toyota sitting face-down on the track surface. This belonged to Reaume, who was collected in the incident and came to pit road without the part. While Mayer’s crew dropped their truck on a hammer to bend the nose back in place, joining DiSavino on the track, Reaume was done for the night. Mayer salvaged a 22nd-place finish, six spots ahead of DiSavino.
On the restart, Tate Fogleman rear-ended another truck, rupturing the radiator on his #12 Solid Rock Carriers Chevrolet. He pulled behind the wall, but was not put under the “Crash Clock” and was thus able to return to the track. He completed 16 more laps, climbing from 39th to 37th before he was eliminated in the night’s biggest wreck on Lap 71. The two trucks he passed were Ray Ciccarelli, who cited rear gear issues after only 15 laps, and Tanner Gray, who slapped the Turn 2 wall with the driver’s side of his #15 Ford Performance Ford. Kris Wright rounded out the Bottom Five with a blown engine on the #02 Wright Chevy Chevrolet, putting two Young’s Motorsports entries in the final five spots.
One of the night’s most impressive runs belonged to Doug Coby, the multiple-time NASCAR Modified Series Champion, who made his Truck Series debut in GMS Racing’s #24 Mayhew Tools Chevrolet. Coby climbed from 30th on the grid to finish on the lead lap in 12th.
LASTCAR STATISTICS
*This marked the first last-place finish for the #34 in a Truck Series race since June 13, 2020, when Bryant Barnhill had transmission issues after 1 lap of the Baptist Health 200 at Homestead. The number had never before finished last in a Truck Series race at Bristol.
*This marks only the second time a Toyota has finished last in a Truck Series race at Bristol, joining Matt Crafton’s first-ever last-place run on August 17, 2016.
THE BOTTOM FIVE
40) #34-Josh Reaume / 3 laps / crash
39) #49-Ray Ciccarelli / 15 laps / rear gear
38) #15-Tanner Gray / 21 laps / crash
37) #12-Tate Fogleman / 30 laps / crash
36) #02-Kris Wright / 59 laps / engine
2021 LASTCAR TRUCK SERIES OWNER'S CHAMPIONSHIP
1st) Niece Motorsports (5)
2nd) GMS Racing, Rackley-W.A.R., Reaume Brothers Racing (2)
3rd) CMI Motorsports, Jennifer Jo Cobb Racing, Kyle Busch Motorsports, Norm Benning Racing, Roper Racing, Young’s Motorsports (1)
2021 LASTCAR TRUCK SERIES MANUFACTURER'S CHAMPIONSHIP
1st) Chevrolet (14)
2nd) Toyota (3)
2nd) Ford (2)
2021 LASTCAR TRUCK SERIES DRIVER'S CHAMPIONSHIP 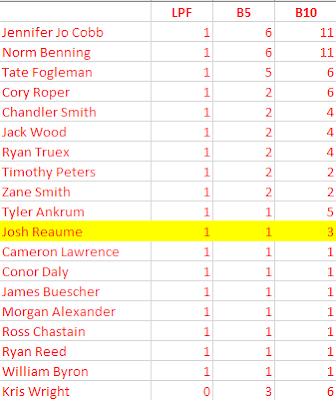 All three top series LASTCAR championship battles are super competitive. It's been more fun than ever to follow along this season