Takuma Sato finished last for the 15th time in his NTT IndyCar Series career in Sunday’s Firestone Grand Prix of Monterey at WeatherTech Raceway Laguna Seca when his #30 Panasonic / Mi-Jack Honda retired from the race with mechanical issues after completing 83 of the race’s 95 laps.

After an up-and-down Formula One career and over a decade racing IndyCar, 2021 has been a nondescript year for Sato. Barring a win in next weekend’s finale at Long Beach - a track that he has won at before - it will be his first winless season since 2015, and a fourth-place finish in the first Detroit race has been the highlight of the year. While nothing is confirmed, Motorsport has publicly pegged Sato as out at Rahal Letterman Lanigan Racing for next year, with signs indicating that he will land at Dale Coyne Racing.

With the addition of a couple part-time entries for the season-ending West Coast swing, the entry list stood at a solid 27 cars. The part-timers were Oliver Askew, trying his hand for a full-time ride at RLL next year, and Calum Illott, who is the driver that Juncos Hollinger Racing tabbed for their first IndyCar races since the 2019 Indianapolis 500. That race saw the Juncos team and driver Kyle Kaiser famously bump Fernando Alonso from the race in the Last Row Shootout.

In practice, Illott was the slowest machine with a quick time of 1 minute, 13.739 seconds, a mere .014 seconds off of A.J. Foyt Racing’s Dalton Kellett. Illott was able to shave nearly four-tenths off in qualifying, outpacing Kellett by a quarter-second to grab the last spot in Row 13. Sato was 19th in practice and 23rd in qualifying, the slowest of the three RLL cars in both sessions.

Towards the end of the pace lap, the grid was noticeably late to form up - so much so, in fact, that the last few rows were not in double-file formation by the time the green flag was dropped. This came in to play no later than the opening lap, when Felix Rosenqvist looped his car coming off of Turn 3, but he was able to drive away immediately and slotted in ahead of both Kellett and Illott, running 27th and 26th, respectively. On the following lap, however, Alexander Rossi made a challenge for the lead on his Andretti Autosport teammate Colton Herta, and at the exit of the turn, Rossi’s #27 car jumped out on him, making contact with Herta and sending him in to the sand, stalling the car. Rossi lost a lap in the ensuing refire-and-pit process, leaving him the only car one lap down for a considerable amount of time.

While it was inevitable that eventually somebody else would go a lap down, it came quicker than expected. On Lap 10, Will Power brought his #12 Team Penske Chevrolet to the pits, complaining of an engine misfire. His crew quickly sent him back out, only losing two laps in the process.

Power remained in last place until the incident that would ultimately decide the day’s last-place finisher. During a commercial break with lap numbers in the late-30s, Sato spun going down the corkscrew section of the track and rolled across the track from the apex, backing in to Scott Dixon, who came barreling down the five-story drop. While NBC’s commentators criticized Sato for not locking it down and sitting in the same spot, others praised Sato for clearing the apex of the corner, even if it did result in damage to both his and Dixon’s cars. Dixon kept his car pointed forwards and escaped with some side pod damage, while Sato was able to drive away after a couple more cars passed by. He took his car to the pit lane and emerged three laps down, in last place. Rossi had lost a second lap by this point in time, putting him and Power on the same circuit. Sato soldiered around until he eventually took it to the garage with lingering mechanical gremlins, completing a total of 83 circuits on the day.

Power and Rossi were 26th and 25th, respectively, the only cars two laps in arrears at the end of the race.

Give a call to former NASCAR driver Jimmie Johnson, who scored his best career IndyCar finish in 17th near the end of a long learning season for him. Especially impressive was the way he handled himself when Romain Grosjean tire-slammed him down the corkscrew in the closing stages of the race; Johnson readjusted his line through the dirt and was able to continue on mere car lengths behind the #51 car. 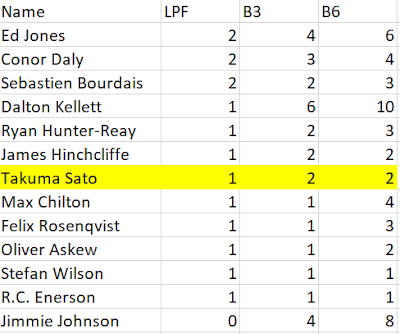