Marcus Ericsson finished last for the 4th time in his NTT IndyCar Series career in Sunday’s Acura Grand Prix of Long Beach when his #8 Huski Chocolate Honda crashed out of the race after completing 25 of the race’s 85 laps.

The finish was Ericsson’s first since Gateway in 2020, twenty races ago.

After a formula racing career that spanned from the United Kingdom to Japan, Ericsson joined Formula 1 with the Caterham team in 2014, where he failed to score any points all season. After that team shut down, he spent three years with Sauber (now Alfa Romeo), and this time scored 18 points over three years. The end of 2018 saw Ericsson move to IndyCar, where he ran with Schmidt Peterson Motorsports. He scored a runner-up finish at Detroit but missed the Grand Prix of Portland while serving as a reserve driver for Alfa, finishing 17th in the standings. The Swedish driver then moved to Chip Ganassi Racing in 2020, stringing together five straight top-tens in the early portion of the season. He returned to the squad in 2021 and won two races in a breakout year. Heading into Long Beach, he'd only finished outside the top ten in three races.

Ericsson entered the weekend as the only current Ganassi driver not confirmed for 2022 - eventual championship winner Alex Palou and the all-star car of Jimmie Johnson with Tony Kanaan have already inked deals for next year. The entry list held much the same from last week at Laguna Seca; the lone addition was Southern California native Charlie Kimball, driving the same #11 car he drove for the month of May at A.J. Foyt Racing.

Dalton Kellett, Kimball’s teammate at Foyt, trailed the first practice in 28th with Johnson in 27th. The pair swapped positions in practice 2 at the bottom. Ericsson was already having a weekend to forget, placing 17th in first practice and 22nd in final practice. Both Kellett and Johnson picked up their pace in qualifying enough to best Oliver Askew, who looked like a revelation in the third Rahal Letterman Lanigan Racing car last week but struggled for speed in Long Beach, compounded by a penalty in qualifying for impeding another driver.

It was not long before the field found trouble. On the first lap, Ed Jones dove to the inside of James Hinchcliffe in a hairpin turn, nudging Pato O’Ward and sending the Mexican driver in to a spin. The field stacked up behind them, and it was Sebastien Bourdais that came across the line last at the conclusion of the first lap. Askew was still 26th, ahead of only Bourdais and O’Ward, and Ericsson was 14th, up three places from his starting spot of 17th. Ryan Hunter-Reay was also among cars with damage in the first-lap melee, and an extended pit stop dropped him to last at the end of Lap 2.

Hunter-Reay, in his last full-time race with Andretti Autosport, stayed in last until Lap 18, when O’Ward stalled at the end of the pit lane with a broken driveshaft. It was a heartbreaking end to a championship bid for the Arrow McLaren SP driver, however unlikely the championship would have been, as he entered the race 35 points back of Palou.

On Lap 26, Ericsson was racing Alexander Rossi for 19th position in a quick left-right set of turns. Rossi gained the inside position for the left-hander, and Ericsson’s car slid wide and wound up in the tire barriers, ending his day.

Callum Ilott, driving for Juncos Hollinger Racing, succumbed to brake issues after 47 circuits, and it looked like that would be the Bottom Three for the day. However, O’Ward’s crew repaired his broken car and sent him back out on track to gain points. He wound up completing 43 total laps, although it was not enough to keep from falling back to third in the point standings.

Ericsson, who had been running a comfortable 12th before the first pit cycle, wound up in last, securing his first last-place finish of 2021. Ed Jones secured the 2021 LASTCAR NTT IndyCar Series drivers championship by virtue of having one more Bottom Three finish than Conor Daly. A.J. Foyt Racing and Andretti Autosport tied for the owners championship with three last-place finishes apiece, and Chevrolet claimed the manufacturers championship via a 9-7 margin over Honda. 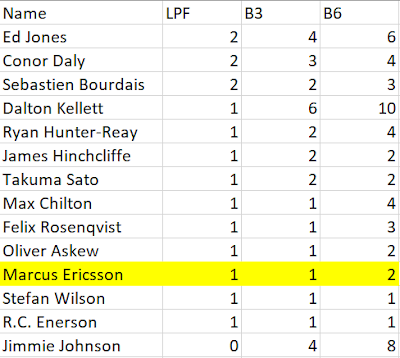