CUP: Michael McDowell the first driver to win Daytona 500 and finish last in Southern 500 in the same year

Michael McDowell picked up the 35th last-place finish of his NASCAR Cup Series career in Sunday’s Cook Out Southern 500 at the Darlington Raceway when his #34 Love’s Travel Stops Ford crashed after 30 of 367 laps.
The finish, which came in McDowell’s 384th series start, was his first of the season and first in a Cup points race since June 28, 2020 at Pocono, 48 races ago. In the Cup Series’ last-place rankings, it was the 36th for the #34, the 619th from a crash, and the 712th for Ford. Across NASCAR’s top three series, it was the 50th for the #34, the 980th for Ford, and the 1,269th from a crash.
Darlington marked the beginning of McDowell’s first-ever Playoff run, thanks to his dramatic first career Cup victory in February’s Daytona 500. Following an 8th-place run the next week on the Daytona Road Course, than a 6th at Homestead, McDowell scored just two more top-ten finishes – a 3rd at Talladega, followed by a 7th the next month at COTA – but otherwise struggled to keep up his consistency. He remained the lowest-ranked winning driver in the Playoffs for much of that time until Aric Almirola took the checkers in Loudon. Last week’s regular season finale at Daytona nearly saw McDowell match Cale Yarborough’s mark in 1983 of winning the Daytona 500, then finishing last there in the summer. McDowell ultimately moved up a spot later that night when runner-up Chris Buescher was disqualified.
With metric qualifying returning at Darlington, McDowell secured a spot in the Top 16 due to his Playoff spot, but ranked second-lowest in 15th due to the run in Daytona. Only Brad Keselowski, who struggled at Darlington in the spring, ranked lower in 16th.
Rolling off 38th and last was Quin Houff in StarCom Racing’s #00 Units Chevrolet, just four days after the team sold their Charter to another team. Houff would be joined in the back by 21st-place starter Austin Dillon for multiple inspection failures on his #3 Bass Pro Shops / Tracker Off Road Chevrolet. By the end of Lap 1, both Houff and Dillon had passed Joey Gase, whose #15 Donate Life South Carolina Chevrolet dropped to 6.096 seconds back of the leader. Gase reported he was tight though the center of Turns 3 and 4, and dropped 0.762 back of Houff by Lap 4.
On Lap 9, Houff bounced his car off the wall and made an unscheduled stop to pull away bodywork on the right-rear. This made Houff the first driver to fall off the lead lap, and he returned to action three laps down. As Houff got up to speed, NASCAR reported a right-front tire rub on Alex Bowman’s #48 Ally Bank Chevrolet. Bowman then hit the wall in Turn 3, and was sideswiped by teammate William Byron in the #24 Axalta Chevrolet. Both made it to pit road under caution, by which time Bowman had also cut down a left-rear tire.
By the 16th circuit, Bowman and Byron returned to the track on the lead lap with Houff still in last, multiple laps down and Gase one behind. By then, Houff reported his car was “wandering” on the straightaways and even wondered if he’d lost second gear. He restarted the race on Lap 29 with 35th-place Josh Bilicki dropping behind him in an early 1990s Rusty Wallace “throwback” scheme on his #52 Junction Fuels Ford.
McDowell, meanwhile, had worked his way toward the front of the field, aiming for a top-fifteen finish to keep him in Playoff contention. On Lap 31, heading off Turns 1 and 2, McDowell had just cleared Erik Jones, whose #43 Petty’s Garage Chevrolet had just stayed out on old tires. McDowell was running the inside line off Turn 2, a carlength ahead of Jones, when the back end of his car got away and the right-rear clipped the outside wall. The car then slid across the apron and slammed the inside wall with the right-front corner. Done for the day, McDowell climbed from his car, which was towed behind the wall. McDowell took last from Houff on Lap 33 and NASCAR declared him out on Lap 37.
Taking 36th was James Davison, whose #53 Jacob Companies Chevrolet broke loose entering Turn 2 and backed into the outside wall. Teammate Cody Ware spun to avoid Davison in his #51 Nurtec ODT Chevrolet, then cut down a right-front tire and shredded the fender. Kyle Busch finished 35th after contact from Austin Dillon put his #18 M&M’s Toyota into the wall off Turn 2. An angry Busch pulled behind the wall through an opening blocked by traffic cones, causing several people to scatter as he drove to his hauler.
William Byron’s car was destroyed in a second accident on Lap 201, leaving him 34th. Cody Ware exited the race due to carbon monoxide poisoning, which sent him behind the wall near the end of Stage 2. Ware was checked out later that night after treatment in the infield care center.
LASTCAR STATISTICS
*This marked the first time in NASCAR history that the winner of the Daytona 500 finished last in the Southern 500 in the same year. He is also the seventh Daytona 500 winner to finish last in the Southern 500 in any year, joining Junior Johnson (1965), Cale Yarborough (1967), David Pearson (1984, 1985), Richard Petty (1986), Derrike Cope (May 2006), and Trevor Bayne (2016).
*McDowell finished last in a Cup race at Darlington once before on May 7, 2011, when he dropped out of the Showtime Southern 500 after 7 laps due to a vibration on his #98 K-Love Radio Ford.
THE BOTTOM FIVE
37) #34-Michael McDowell / 30 laps / crash
36) #53-James Davison / 50 laps / crash
35) #18-Kyle Busch / 125 laps / crash
34) #24-William Byron / 199 laps / crash
33) #51-Cody Ware / 209 laps / crash
2021 LASTCAR CUP SERIES OWNER'S CHAMPIONSHIP
1st) Rick Ware Racing (5)
2nd) JTG-Daugherty Racing, Stewart-Haas Racing (4)
3rd) Spire Motorsports (3)
4th) Chip Ganassi Racing, Front Row Motorsports, Motorsports Business Management (2)
5th) Hendrick Motorsports, Joe Gibbs Racing, Roush-Fenway Racing, StarCom Racing (1)
2021 LASTCAR CUP SERIES MANUFACTURER'S CHAMPIONSHIP
1st) Chevrolet (15)
2nd) Ford (9)
3rd) Toyota (3)
2021 LASTCAR CUP SERIES DRIVER'S CHAMPIONSHIP 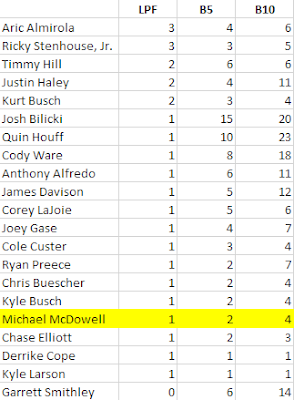